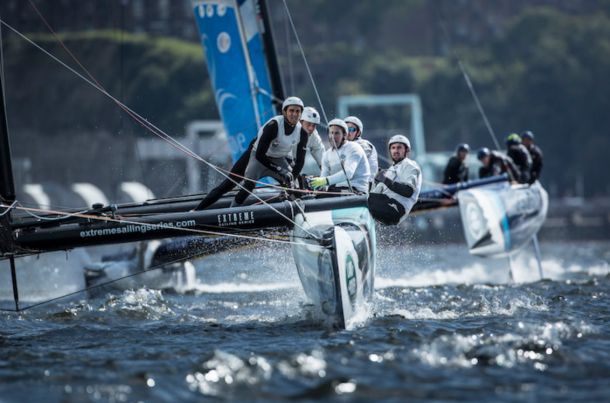 As the great British summer of sailing gets into full swing, the eight elite level Extreme 40s are preparing to descend on the Welsh capital for the Extreme Sailing Series Act 4, Cardiff presented by Land Rover, from the 18 – 21 June 2015. One of the narrowest city-centre stadium racecourses on the global tour, head to head battles and photo finishes will be the order of the day as the fleet race down the hourglass shaped track in the heart of Cardiff Bay.

Returning to Cardiff for the fourth consecutive year, the Extreme Sailing Series has captured the imagination of the public and drawn crowds of over 120,000 people to the free to enter Race Village, set in the shadow of iconic Welsh landmarks the Senedd and the Wales Millennium Centre. Fans who can’t make it to the public Race Village can watch the racing live online, with commentary from Land Rover Global Brand Ambassador Hannah White, alongside Extreme 40 expert and round the world sailor Nick Moloney, Friday 19-Sunday 21, 1530-1700 BST daily.

With three Acts complete in Singapore, Oman and China, SAP Extreme Sailing Team’s outstanding performance at Act 3, Qingdao saw the Danes hold off the chasing pack and take their first ever Act win, currently leading the fleet on 28 points. A beat off the pace in second place on 27 points, pre-season favourites The Wave, Muscat will be looking to bridge the one point gap in Cardiff to put themselves back at the top of the leaderboard – and having won the UK Act in both 2014 and 2013, the odds are in their favour.

Two-times Series champion Leigh McMillan is joined by Britain’s golden girl, double Olympic gold medallist, Sarah Ayton as tactician on board The Wave, Muscat: “Cardiff is challenging. It’s going to be one of those events that isn’t over until the very end. It could throw anything at us, light winds, breeze, and shifts so it will be a really varied event,” explained Ayton when we caught up with her this week. “SAP Extreme Sailing Team put on a very good performance in China, they were really in a different league with their boat speed and that is a bit of a concern for us. They are a threat that we need to be aware of and we can’t afford to let that happen again. All the teams are upping their game now so it’s sure to be a battle.”

Home waters for two-times British Olympian Stevie Morrison and his Team GB teammates Ed Powys and Nic Asher on board Oman Air, Morrison is looking forward to the challenge of a new venue. “It’s a new venue for me and the crew. It looks like it will be small and hectic out there. The order of the day will be keeping the boat moving fast over a short course. We had a pretty disappointing event in China so it’s really important for us to bounce back and up our game. That result has focused us and fired us up, so hopefully we can perform well.”

Looking to lift themselves from their current seventh place standing, the British flagged GAC Pindar have made some significant crew changes for the UK Act. British Olympian and former Series winner Chris Draper, who just this week was announced as part of the Japanese challenger for the America’s Cup, will join the team bringing years of valuable experience as co-skipper and helm, with Japan’s four times America’s Cup sailor, Kazuhiko Sofuku, making his Extreme Sailing Series debut as bowman.

With up to eight races planned each day, the action will kick off Thursday 18 June with the official media day followed by three full days of racing when the free to enter public Race Village opens located on Cardiff Bay waterfront. Families can enjoy food and drink from our street vendors, burn some rubber on the go-karting track, test their head for heights with the high rope course, watch fantastic BMX displays and catch Hannah White as she displays her hydrofoiling Moth, SpeedBird, fresh from setting a new record as the fastest woman to cross the English Channel in a single handed dinghy. Find out more about the onshore activities here.

The Line Up – Act 4, Cardiff presented by Land Rover