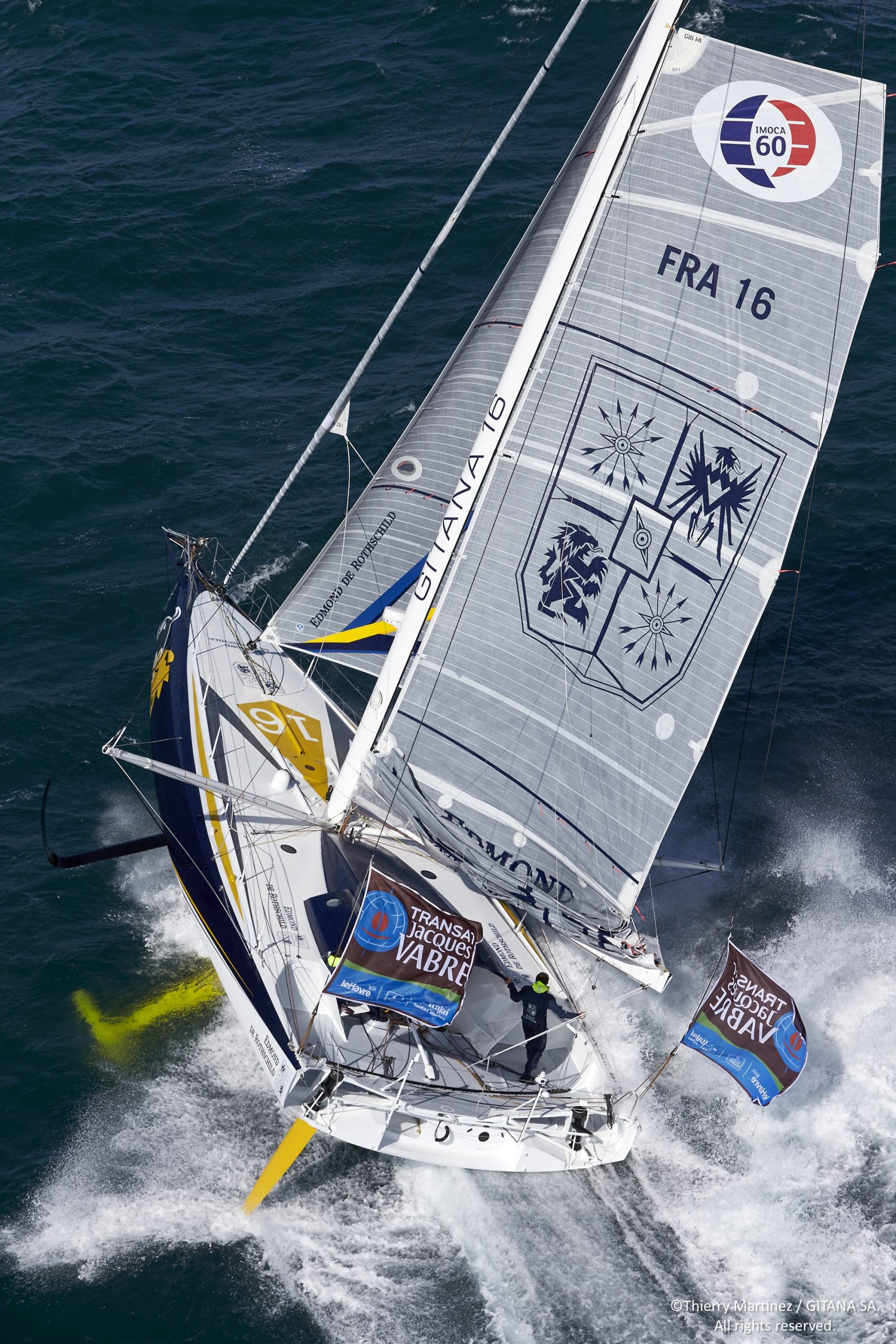 You can see Gitana's foils at work here as the boat flies through the water. Photo Thierry Martinez.

Sébastien Josse made it into the famous channel in Les Sables d’Olonne late on Thursday afternoon aboard Mono60 Edmond de Rothschild. Live from the drone on Facebook, which Sébastien will carry with him on the Vendée Globe from 6th November, the team shared the special moment with internet users. The sailor had left the boats port in Lorient just a few hours earlier.

The dockside arrival into Port Olona may seem like just a formality, but it is a symbolic moment; one that seals the start of the adventure and triggers the countdown to the start of the race. “Here, we’re going to continue sailing with the team once a week through until the start so as to remain focused on the goal and pin down the timing for the big day.” Indeed, nothing has been left to chance by the Gitana Team because, for the past three years, it has had to imagine, build a boat and then to prepare, sail, train, qualify and above all compete in a series of preparatory races, including no fewer than four transatlantic races. “Being dockside here, together with the other competitors, is like the first reward for the team and for me. Preparing for a solo round the world and fine tuning such a boat involves a great deal of work.”

Sébastien Josse knows Les Sables d’Olonne very well. He virtually lived there from 2001 to 2004, for his first Vendée Globe project with the Vendée-based company VMI. “The VMI teams were very fond of the area. The boatyard was in Talmont-Saint-Hilaire and then we spent time in Port Olona too. The associates came to see us and take a look at what we were doing. I’ve come back several times since, for the Figaro and in 2008 for the Vendée Globe, with the BT team (Offshore Challenge). Even more than a passion for sailing, there’s a deep sense of pride among the inhabitants of the Vendée for this race. It’s their event. Their presence is very strong and they support us and cheer us on from beginning to end!”

Sébastien Josse is very clear about how he wants to spend his time these last three weeks on shore: “I’ve been doing some excellent physical training in Brittany and I’m going to continue with that here. I have some slots in the morning and evening. I’m going to have to stick to it as there are a lot of people requesting my input and it’s important to get some time out from that and keep in shape physically. We’ve set down our bags in a district called La Chaume, which we really like within Gitana Team. It’s authentic and there are wild beaches not far away, which are perfect for going running. I also like the outdoor pool at Le Remblais. It stays open till late and once it’s dark, it gives you a boost to come and spend an hour in the water. I can also practice sport on my own with my usual programme and keep to my routine. I also love going surfing, when I get the chance. Before I get tossed about in the Bay of Biscay, it’s great to get in a few sessions in the waves and be at one with nature.”

Sailing once a week

Sébastien has set the tone. It’s not because the boat is dockside that everything is squared away for three weeks. “Even though we have a bit of a role to play here now, inevitably it’s important for me that the boat continues to be ‘match fit’, in race mode. We’re going to be sailing once a week to remain focused, going through the manoeuvres for the big day, hoisting the sails, easing the sheets and so on. And I’ve even requested that for the final week, everything remains in position on the deck and that we’re in the starting blocks.”

For three weeks, the crowd will flock into the race village and along the pontoons in Les Sables. Everyone will be hoping to catch a glimpse of the sailors and to share a little of their adventure. The Vendée Globe village officially opens on Saturday 15 October at 10:00am. Extending out some 25,000m2 around the basin in Port Olona, the site may well play host to over a million visitors through until 6 November! At the heart of festivities, at the top of the gangway that leads to the monohulls, the unique exhibition “Gitana, entering into the legend” celebrates the 140-year maritime heritage of the Rothschild family and retraces a quite unique saga with objects and photos from its rich history. An installation for young and old alike, it also offers visitors a chance to hop aboard with Sébastien Josse in a virtual reality tour as well as discover a scale model of the cockpit of the Mono60 Edmond de Rothschild. Each week, actual tours of the boat will be up for grabs via a special draw. Children will also be able to let their creative juices flow on an expression wall dedicated entirely to them: budding artists and future adventurers, step this way!