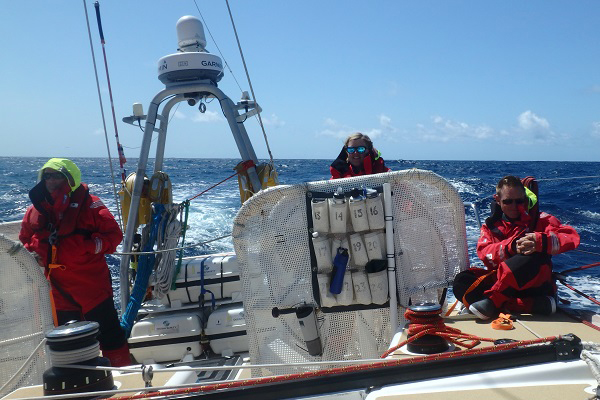 A high pressure system approximately 100 miles off the Californian coast has the Clipper Race teams battling in light airs, as they search for every advantage with wind speeds dropping to as little as 0.4 knots.

The Race Viewer is a colourful display of zig-zags as the teams tack and gybe their way south, using what wind and current they can to ensure they keep moving in the direction of Panama. At the front, Garmin lies 10 nautical miles ahead of LMAX Exchange, but as of 0900 UTC it polled a speed of 0.7 knots.

“Yesterday we made a run inshore looking for a bit more breeze. It seemed to pay off and now we have managed to squeeze a few miles ahead after making decent progress with a good wind angle through the night. Winds are now very light however and progress at times can be frustratingly slow,” explains Garmin Skipper Ash Skett.

“As we neared land during the night, the sky went from completely cloudless to solid grey in what seemed like an instant. Since then we have not seen much of the sun although that's fine as we don't want to be too spoilt with good weather this early in the race. The settled conditions mean a flat, comfortable boat and the crew who experienced the harshness of the Seattle Pacific Challenge certainly have a new found appreciation for our current state of calm.”

Derry~Londonderry~Doire lies in third place with only 8 nautical miles between Mission Performance in fourth and PSP Logistics in seventh. PSP Logistics Skipper Max Stunell, says his crew is also focusing on the positives as they work to eke out the best possible speed while surrounded by their rivals.

“With a fantastic day’s sailing yesterday it seemed almost too good to be true and it was. After a fickle night of lightening wind, we have been in a drifting competition with the surrounding boats ever since. With the wind not due to fill in anytime soon it really is about scratching out 0.1 of a knot here or there.

“The grey that we had become accustomed to on the previous race has also returned but thankfully the temperature has remained comfortable on deck and the crew are in good spirits. As I write this, the wind has dropped to 0.4 of a knot…,” he added.

The fortunes of the fleet could be about to change according to Clipper Race Meteorologist Simon Rowell, who himself is a former Race Skipper and understands the frustrations of the teams in these conditions.

In his daily weather forecast to the Skippers, Simon explains: “The light airs most of you are in are due to the secondary low that’s trying to form along the front down to the south-west of you. This shouldn’t develop into anything very strong at all, but it is destroying all the wind on the east side of it – which is where almost all of you are right now. The good news is that it won’t last long, and over the next 24 hours you should get a much better flow from around north-north-west as the low dissipates and the East Pacific High moves back in.”

One team that has so far escaped the wind hole that has engulfed the fleet is twelfth-placed ClipperTelemed+, which started the PSP Logistics Panama Cup several hours later than its opponents due to last minute repairs. Seeing the other teams sail into a wind hole up ahead could give Skipper Matt Mitchell and his crew the opportunity to make up some miles.

“Over the last few hours the wind started to fill so we are now sailing with our lightweight spinnaker and making decent progress. We have just gybed as we were in danger of heading too far west.

“Overnight the wind should pick up and apparently there is a front hanging around somewhere, although it seems to have stayed away from us for the time being. It has got a bit cloudy though so we no longer have the horizon to horizon blanket of stars that always leaves me with a feeling of awe,” Matt added.

With the wind forecast to pick up soon, who will take advantage of it first and how will the positions have changed by this time tomorrow in the PSP Logistics Panama Cup? Stay tuned to the Race Viewer to find out.