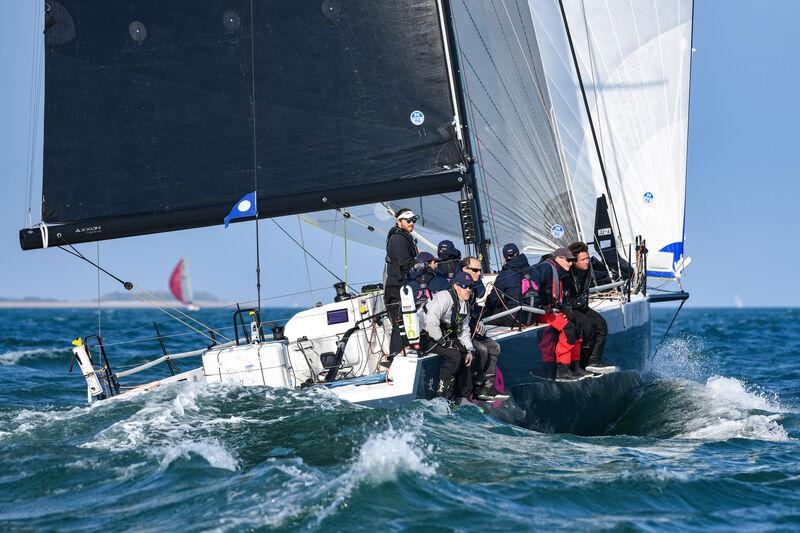 Veteran of the Volvo Ocean Race, Dave Swete, is sailing master on board Sunrise this season. The Hamble-based Kiwi professional is looking forward to sailing with her young crew, who earlier this season finished third from 112 finishers in the RORC’s Myth of Malham Race, covering the first part of the Fastnet Race course down to the Eddystone Lighthouse.

Owner, Tom Kneen, is only 36 and many of his crew are part of the RORC’s long term initiative to develop racing for Under 35s, run by the club’s Griffin Committee. Swete sees great value in the program: “In the UK I think there is a link that is missing between people who come out of university or school or out of dinghies and into keelboats.

“On Sunrise we have a youth crew who are all amateurs, apart from me, and up and coming sailors who might make a career out of it.

“We have three girls on board – in fact I don’t know a Performance 40 that doesn’t have a girl on board. It is quite an inclusive class like that.” (Swete is also Class Manager for the Performance 40 class, which straddles IRC One and Two in the Rolex Fastnet Race.

Eric Fries and his crew on Fastwave 6 are seen as quiet favourites for winning IRC Two, a dark horse to watch out for in this fiercely contested class. Under her former guise of Adam Gosling’s Yes!, Dawn Treader was a proven performer and Ed Bell continues to campaign her very seriously.

Just as serious, but always with a smile on their faces, are the crew of Richard Fromentin’s Cocody. Crewman Nicolas Dupard comments: “Our main goal is to win on corrected time in our class. At least we are aiming for a top three! In the end, the most important thing for us is to have done the most to achieve our goal, even if we’ve not won the race.

“We are all good friends, and we are pretty sure that if we’ve done our best, we will have a lot of fun on this fantastic race.

“As a private joke, we call ourselves “Cocody’s Rangers” – and a Ranger never gives up! Do not hesitate to inform our competitors! Also, we noticed that Rolex Fastnet Race ‘RFR’ could be the ‘Richard Fromentin Race’! Maybe it will bring us luck for this year.”

Bringing a huge amount of experience from competing in the previous six Rolex Fastnet Races is Nicolas Loday and Jean Claude Nicoleau’s Grand Soleil 43 Codiam. Their track record includes IRC One victories in 2009 and 2011 and overall finishes of tenth and seventh in 2017 and 2011 respectively.

The J Boat family will be out in force for the Rolex Fastnet Race and are well represented in IRC Two. Stuart Lawrence and his crew on the J/120 Scream 2 have been making a noise in JOG races this season. If the wind direction sets up the course for a reach to the Rock and back, Lawrence & Co. will have a scream on corrected time.

Of the J/111s lining up in this division, pick of the bunch is probably SL Energies skippered by Laurent Charmy, who finished third overall under IRC in last season’s Drheam Cup.

Corinne Migraine co-owns the successful J/133 Pintia with her father Gilles Fournier. This family team are very long-term supporters of RORC races and fare very well in them too – this year’s second place overall in the Myth of Malham being a perfect example.

Fournier is proud of his family line-up on board. “I sail with my daughter Corinne, my grandson Victor Migraine and my two nephews – Yan and Thomas Fournier. We are all from the Société des Régates du Havre, the best sailing school in France.”

Another French family with a long and strong association with the Rolex Fastnet Race are the Catherineaus. Back in that fateful year of 1979, Alain Catherineau risked his life coming to the rescue of seven sailors on board the RORC’s youth training yacht Griffin, skippered by Stuart Quarrie.

For his efforts, Catherineau was voted the YJA Yachtsman of the Year for 1979. Despite that bruising experience, he continues to come back to the race and with great competitive spirit. Skippered by his daughter, Marie, and with his other daughter Anne-Sophie on board, the J/122 Lorelei has won the RORC’s La Trinité Race and will be a serious contender in IRC Two.

Sistership to Lorelei, British skipper Andy Theobald’s J/122 R&W is another serious player in this class. Theobald loves to bring in employees from his R&W civil engineering business to share the pleasures and challenges of offshore racing with him. Another to watch will be Christopher Daniel’s J/122e Juno, the 2019 Champion in the Performance 40 class.

Several ‘modern classic’ yachts from the 1960s and 1970s are competing in the race. Among them is the Nicholson 55, Eager, owned by yacht broker Chris Cecil-Wright and skippered by RORC Committee member Richard Powell. Eager was the first Nicholson 55 to be launched when she was known as the Lloyd’s of London Yacht Club’s Lutine until she was sold in 1999.

The yacht has since undergone a massive rebuild and modernisation, including the fitting of a much-enlarged sail plan based around a carbon spar, a new rudder, deck, deck layout and superstructure, and complete interior, layout and systems. Expect Eager to be well sailed and very competitive in IRC 2, as several stars of the INEOS Team UK America’s Cup crew are expected to step on board for the ride.

A few latter-day America’s Cup veterans, such as Paul Standbridge will also be on Desperado of Cowes, the Swan 65 ketch owned since 1986 by Richard Loftus. For this year’s race Loftus’ crew has an average age of 65 to compete with him in his 10th Fastnet Race.

Over the years, Loftus has enjoyed success with Desperado, notably in 1989 when his heavyweight ketch and upwind weapon won CHS overall. Desperado also enjoyed the breezy 2007 race, when they found themselves well in the lead at the Fastnet Rock under corrected time, only to be overhauled downwind on the way back. Nonetheless the Swan 65 still finished 7th overall under IRC. (Classics in the RFR article)

Even older than Desperado, but almost identical under IRC rating, is Refanut. This 63ft Sparkman & Stephens design was built in Stockholm in 1955, originally for Swedish banker and industrialist Jacob Wallenberg.

The classic yacht is now being campaigned by his grandson, Fredrik Wallenburg, who can’t wait to get going on his second assault on the Rolex Fastnet Race.

“Our first was in 2015. Now, as then, it is still a bucket list race for most of the crew.” Refanut has been raced extensively since her launch in 2015, mostly in the Baltic (the Gotland Runt race being the annual tradition), but she’s also had some success in the Mediterranean, as well as in Newport, Rhode Island.

“The crew is a mixture of my friends (around 50) and my younger brother’s group (30 or so). I’d love to call it brains and brawn, but the biggest brawn is in my group and there is no telling where the brains are!”

Fredrik and his brother Peder are passionate about continuing to race Refanut. Other notables on the crew are the former Commodore of the Royal Swedish Yacht Club, Staffan Salén, and the owner/helmsman of Team Inga from Sweden, Richard Göransson.”

One of the biggest ‘races within a race’ will be between the 18 First 40s competing, most falling within the minimum 1.070 IRC TCC limit for the Performance 40 class. Many are making the trip to Cowes from different corners of Europe.

Gianrocco Catalano and his Italian crew on Mon Ile Tevere Remo enjoy good results in the Mediterranean including an overall IRC victory in the 151 Miglia-Trofeo Cetilar race. Håkan Grönvall, from the Royal Swedish Yacht Club (KSSS) is bringing his First 40 C-Me the 1,200 nautical miles from Stockholm to compete.

Alexander Vodovatov, the head of Russian offshore racing club, SeaVentus, is chartering the First 40, Zada, having previously chartered a Farr 50 for the 2017 Rolex Fastnet Race, followed by a J/122 in 2019. “For my club this will be the fifth time in the Rolex Fastnet Race,” said Vodovatov. “We respect this race. We know its history and traditions, and we never miss an opportunity to compete in this legendary race.”

Finally, another strong IRC Two contender will be serial RORC entrant Ross Applebey’s Scarlet Oyster, whose family has been campaigning their Oyster Lightwave 48 continuously for 30 years.

During this time, they have racked up numerous race wins and class victories in notably the Fastnet Race and RORC Caribbean 600. In 2019, Scarlet Oyster won overall both the gnarly De Guingand Bowl and the Cowes-Dinard-St Malo. This year, at the time of writing, Applebey’s red flyer is sitting third in IRC Two in the RORC’s 2021 Seasons Point Championship behind Sunrise and Dawn Treader.