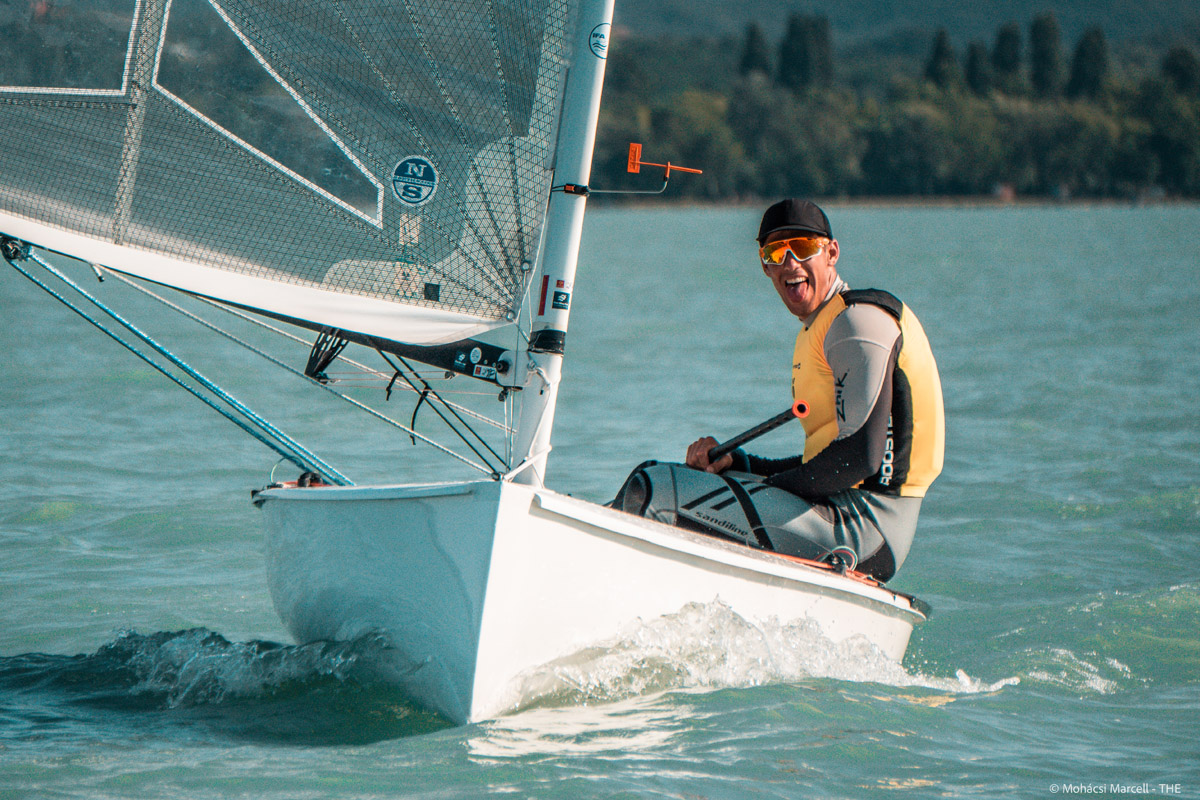 Domonkos Németh, from the host club, Tihanyi Hajós Egylet, has won the U23 Finn World Championship for the Jorg Bruder Finn Silver Cup at Tihany on Lake Balaton, Thursday, to become the first Hungarian to lift the title.

In a reversal of fortunes behind him, Bence Rácz overcame his older brother Levente to take the silver medal and secure a full Hungarian podium.

With some surprisingly good conditions with 10-12 knots, three races were sailed on the final day. Németh won the first two to win overall and headed home, leaving Bence Rácz to win the final race.

In Race 9 the leaders all preferred the left, heading toward more pressure. The top mark was under the Tihany peninsular, so there were also some right shifts coming in. At the top Németh led from Levente Rácz, Andres Ivan Lloret Pérez, from Spain and Bence Rácz. Lloret Pérez was going very well upwind all day.

On the first downwind, Panagiotis Iordanou, from Cyprus caught up to fourth, while Lloret Pérez dropped to fifth. The left was again favoured on the second beat, and by the finish Németh had a big lead from Levente Rácz and Bence Rácz.

Levente Rácz led at the top mark in Race 9, finding the best layline into the mark from the left. However, Németh caught him by the bottom and led round the rest of the race with Bence Rácz in third.

The final race was sailed in great conditions up to 10-14 knots in gusts, rolling waves and not too shifty. With Németh heading home having already won, the battle was on for the other medals.

Again, left was popular and at the top it was Zoltán Veisse, from Lloret Pérez and Bence Rácz. Unfortunately, Levente Rácz broke his vang and dropped off the pace.

Lloret Pérez again showed some upwind speed to come through to lead at the second top mark from Bence Rácz, Iordanou and Mikhaikl Yasun, from Russia.

On the final run, Yatsun closed on the lead, and got an inside overlap on Bence Rácz, who was now in the lead, at the final turning mark, but it wasn’t enough and Rácz took the win from Yatsun and Iordanou. Levente Rácz, who had been second overall all week, crossed in eighth which meant that his younger brother had beaten him by one point and snatched Silver.

Bence Rácz, “Before the last day Levente was leading in front of me by four points, so I knew that something had to happen to overtake him and after the first two races he had a six-point advantage.

“In the last race, I wanted to win and control him, but the most important thing was to win the final race. But it was hard for me because I am not so heavy, so I was just focusing on my sailing.

“In the whole regatta consistency was the key, I think. I made no big mistakes and my worst race was a seventh”

He explained this was just his second year in the Finn. “Doma and my brother started sailing Finn before me. That’s why I didn’t go last year to France. Before that I sailed Radial, 4.7, 420 and Cadet and Opti.

“We have a great group here of five or six junior Finn sailors. In training we are always pushing each and of course we have rivalries, especially with my brother, but we always push each other so it’s really great thing. Doma is the best of us but in lighter conditions we can put some pressure on him.

“In fresh conditions we just watch him and learn, especially downwind. It’s a great team for us. Next year, my plan is sail Finn, gain some weight and sail the Silver Cup again and maybe some more international regattas if I have the chance”

The Finn class would like to thank Tihanyi Hajós Egylet for hosting the Finn Silver Cup. It is the third time it has been held in Hungary, but the first time at Tihany, and to gather 20 boats in the current times is very encouraging. In September the Masters return to the club for their European Championship, for which there already 66 entries.