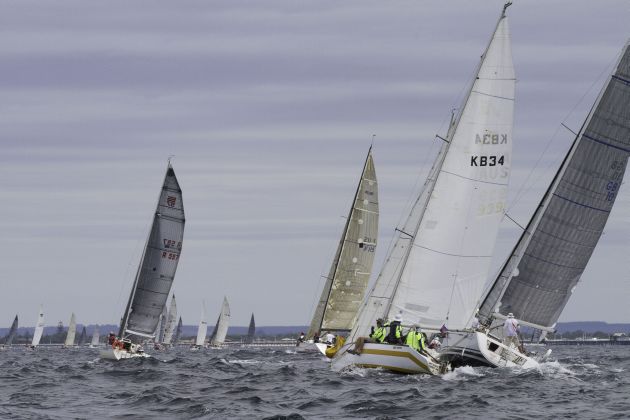 A string of cruiser racers make their way towards the Busselton Jetty in race one. Photo Bernie Kaaks.

Easterly winds at 15- 20 knots gave sailors a wonderful introduction to this year’s Geographe Bay Regatta. The big boats sailed a 19 mile course around the bay, while the Viper sports boats sailed a series of windward and return races and the M32 catamarans sailed on a match racing course alongside the Busselton jetty.

Once again the most popular was the Premier Cruising Division, where 22 yachts did battle. Local yacht Twist n Shout, a DK35 sailed by Doug Lawler was out of the blocks smartly and set the pace with the Albany entry, Michael Cameron’s .Easy Tiger and Tony Carter’s Just Cruisin close behind. Just Cruisin, a Beneteau First40, eventually wore down the early leaders to take line honours ahead of Twist n Shout

Easy Tiger, with a prominent “For Sale” banner on display, won the Division from Just Cruisin, with Laurie Flynne’s Beneteau 34.7 in third place.

The Division 3 IRC race was won by By and Large, a Bakewell-White Foundation 36 skippered by Denys Pearce, with Dynamic second and Ian Hewitt’s Mumm30 Red Fever third.

The blustery conditions were challenging for M32 crews in their match racing series. Each bear away was dramatic as crews negotiated the pressure on the leeward bow against the chop on the Bay.

Division 4 attracted 15 cruising yachts. The category allowing the use of spinnakers but oriented towards the club racer, was dominated by David Clifton’s Swarbrick12.2 Thirsty Work, the boat renamed after the termination of a sponsorship arrangement. Ross McLaren’s Beneteau 44.7 French Kiss was next, with the Bunbury based S97 Ocean Cowboy, sailed by veteran Fred Talbot, third over the line ahead of several much larger yachts. On handicap, French Kiss was first, with Thirsty Work and Ocean Cowboy filling the minor places.

For the “no spinnaker” brigade, Division 5 catered for jib and main entries. Gary Griffiths was first and fastest in Heaven Can Wait, with Tony Mills’ Lady Liza second and Ken Waller’s Leonie third.

As might be expected in this sort of regatta, the skill level of competitors varied greatly, from keen Saturday racers on the Swan River, to hardened offshore racers, to novices sailing their first boat. Handicaps have benefited from the experiences of past years (this is the 15th Race Week), meaning that all yachts have a reasonable expectation of a result, regardless of their size or experience.

Much lighter conditions are forecast for tomorrow’s racing.