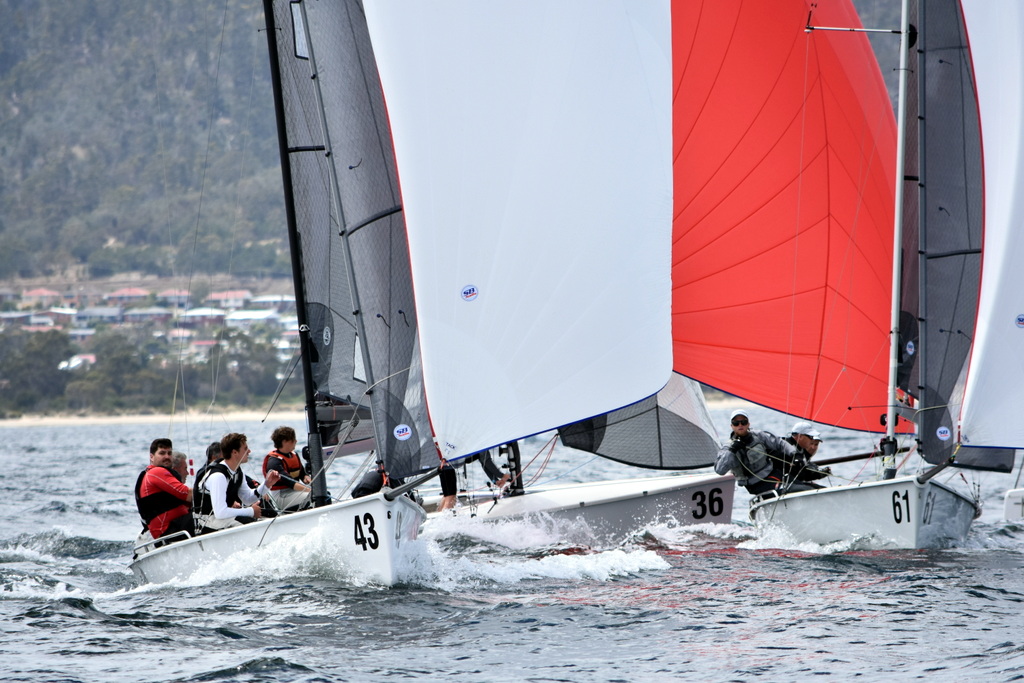 Close spinnaker gybing in race one of the SB20 pre-worlds. Photo Jane Austin.

French youth sailors showed their sportsboat skills on the opening day of the SB20 Pre-Worlds regatta on Hobart’s River Derwent yesterday, with 2015 world champion Robin Follin heading the leader board and Hugo Feydit third in the standings. Between them is defending world champion Jerry Hill from Britain with Tasmania Michael Cooper in fourth place overall.

The Pre-Worlds began with two windward/leeward races on the river in a 10-15 knot north-westerly breeze and 39 starters out of next week’s 2018 World championship fleet of 59 boats, 18 from overseas.

Conducted jointly by the Derwent Sailing Squadron and the Royal Yacht Club of Tasmania, the World Championship starts next Sunday and runs through to the following Thursday, with 12 races scheduled.

If yesterday’s close and aggressive racing was any guide, Hobart is in for some of the most spectacular big fleet racing on the Derwent in decades. Only a few boat lengths separated the leaders in race one, with Follin and his crew of Give Me 5 turning on a ‘’Bernborough finish” under spinnaker (Bernborough was a famous racehorse noted for his powerful finishing bursts) to win from Hobart yachtsman Greg Prescott sailing 2Unlimited. Third to finish was British boat Excellent, steered by British sailor John Pollard. His crew includes Royal Yacht Club of Tasmania Commodore Matthew Johnston.

In race two, Follin rocketed away to win from another British boat, Marvel, skippered by Richard Powell, with his crew including Tasmanian Tim Burnell. Marvel missed the first race due to weigh-in problems but showed plenty of boatspeed in race two.  Third place went to Jerry Hill in sportsboatworld.com who had placed fifth in race one.

After two races, Robin Follin in Give Me 5 (FRA) heads the standings with 2 points with sportsboatworld.com (Jerry Hill, GBR) on 8 points and Eolift Racing (Hugo Feydit, FRA) on 9 points. Best placed Australian boat is Export Roo (Michael Cooper, AUS) who finished a very closed second to Jerry Hill in the 2017 SB20 Worlds at Cowes, England.  Export Roo has 16 points from a twelth and a fourth place.