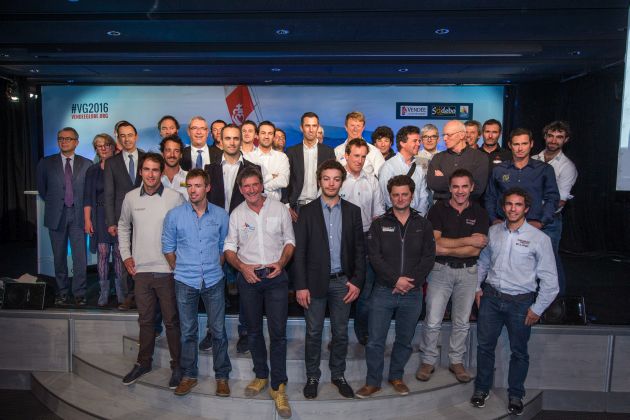 A top class sporting line-up with no fewer than nine nations taking part, Race HQ based at the foot of the Eiffel Tower, multi-screen international TV broadcasts, innovative digital and media arrangements… The eighth Vendée Globe already looks like being an exceptional vintage and confirms its place as the world's leading ocean race and a major sporting event. Another new feature for this edition, henceforth a country will be the guest of honour. This time, it will be Brazil.

On Wednesday 3rd February in Paris, Yves Auvinet, President of the Vendée Council and SAEM Vendée, accompanied by Bruno Retailleau, President of the Pays de la Loire Region, Patricia Brochard, co-President of the Sodebo company and Lionel Pariset, commissioner in charge of maritime affairs for the town of Les Sables d'Olonne, presented the new features for the eighth Vendée Globe and the line-up of skippers for this 2016-2017 race.

With nine months left to go to the start, 27 skippers are officially registered, one more has signed up at the last minute and three others have pre-registered. No fewer than nine nations may be represented this year (France, Great Britain, Spain, Italy, the United States, New Zealand, Switzerland, Hungary and the Netherlands). This will be a record for the event, confirming once again the global reach of this race.

Race HQ set up at the foot of the Eiffel Tower

The nerve centre for the Vendée Globe will be hosted by the City of Paris on Mail Branly, at the foot of the Eiffel Tower. This 1700 square metre area for the media centre and race HQ (1000 square metres ground surface area) host many special events and exhibitions, as well as a bar and restaurant open to the public. More than ever, these arrangements confirm that the Vendée Globe intends to attract as many people as possible.

The Vendée Globe will offer a wide range of tools allowing the general public and media to follow all the news about the race and to get up close to the event. Visitors to online media will have the race at their fingertips around the clock via a brand new website, a mobile app and live Web TV. The arrangements for the live show throughout the race will be improved this year with 3 daily live broadcasts at 0830, 1100 and 1700hrs UTC and three weekly shows on Wednesday, Friday and Sunday.

The Vendée Globe will also be distributing a digital magazine every Friday (i-Magazine). The Web TV will cover all the news of the race around the clock with live broadcasts and repeats. The keenest fans will once again be able to set sail in the famous virtual race, which hopes to bring together 1 million players this year.

Extract from the speech made by Mr. Yves Auvinet, President of the SAEM Vendée:
“The Vendée Globe is an event, which really moves me, as it tells a simple, but universal story. The story of man battling against the elements, fulfilling his dreams, showing courage and determination. This year we are lucky to have a very varied and international line-up. It brings together everything that makes the Vendée Globe what it is. The world's leading ocean racers, young gubns and adventurers from around the world. Today six nationalities are represented by those registered: Britain, France, the United States, Hungary, the Netherlands, Switzerland and three others are represented by those, who are pre-registered: Spain, Italy, New Zealand. We may also welcome a new nation, Germany. If that happens, the Vendée Globe will set a new record for international participation, proving once again the global dimension of the event. To finish, I am very pleased to announce that the City of Paris will be hosting Race HQ on the Mail Branly at the foot of the Eiffel Tower. This will also be the first time that the Vendée Globe will reach out in this way to the general public, putting on a wide range of special events and exhibitions to suit all tastes.”