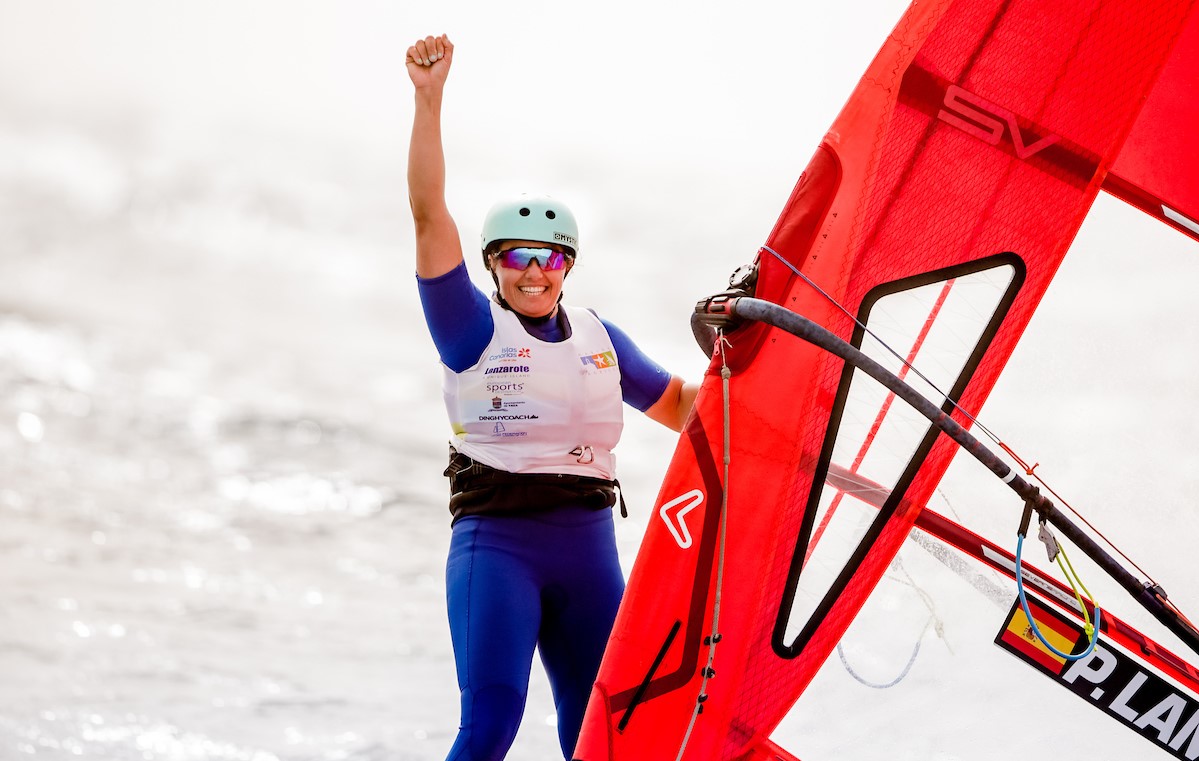 Lanzarote, Canary Islands has surprised during the grand final of the Lanzarote iQFoil Games 2022 with strong winds of more than 20 knots of southeast component and many waves that no one expected.

In addition to typical ‘calima’, which has put on alert the competitors of the top 10 male and female who were fighting for a place on the podium and aspired to compete against the Spanish Pilar La Madrid and French Nicolas Goyard in the final. However, no one was able to snatch the crown from them. For La Madrid, who was leading sovereign all week, this gold medal was a special one: “It was my first victory in an international competition where the final was exciting, although very hard because it was super windy and wavy, so half of the downwind I could only sail on my arms, but I managed and I’m super, super happy!”

Due to the weather conditions, there have been many falls that cost the qualifying positions, “Any small mistake left you out,” said the Spanish sailor, who managed to come out undefeated against the French team formed by Marion Mortefon and Lucie Belbeoch, who took second and third place respectively. “I am very happy because I started in tenth place and I managed to come in second,” Marion Mortefon said with emotion. For both of them it was an epic day, although “at the beginning I was scared with the weather, but finally it was a good day, it was also fun to compete in the medal race with my partner”, Lucie Belbeoch said.

In the men’s category, the French Nicolas Goyard was also victorious in the final against Brazil’s Mateus Isaac and Great Britain’s Finn Hawkins, who took second and third place on the podium from the Dutch duo. “It was quite a challenge, there was a lot of wind and waves, but it was quite a show,” Goyard exclaimed.

His Brazilian opponent also believes that the conditions were too hard, although he started very well in the final, but “Nico has been very fast, but anyway I’m very happy with second place,” Isaac said. Lanzarote weather has put the sailors to the limit: “the final was very intense, I was lucky because two sailors fell in front of me,” confessed the Briton, who finally took third place.

During the grand final in Marina Rubicón, the top 10 men and women not only faced each other in order to challenge the leaders, but also had to survive on the Lanzarote race course. “People had to become more aware by changing the settings of their equipment to face the hard winds and big waves, as well as preparing their material rather to survive than to be the fastest,” explained Gonzalo Costa, secretary of this Olympic class of the International iQFoil Class Association. However, they managed to achieve all races, although “there were many falls, something that does not usually happen, which also made it very attractive”, said Costa. In fact, a stadium was set up in Marina Rubicon, since the competition was very close to the port.

But finally Pilar La Madrid and Nicolas Goyard managed to maintain their position and keep their first position in the podium. In this Olympic class, the leader of each ranking waits until competing in a final three, while the rest of the competitors in the top 10 (male and female) compete against each other to get a pass to the podium and challenge the leader of each category.

“Pilar and Nico have been unbeatable, even with such extreme conditions, everyone has been very happy and they are going to stay for the Lanzarote International Regatta to be held in February, so the thing goes on,” commented Gonzalo Costa. According to the Spanish sailor, “now it’s time for a short break and we will return to Lanzarote to continue training and do the Olympic week in mid-February,” Pilar La Madrid concluded.