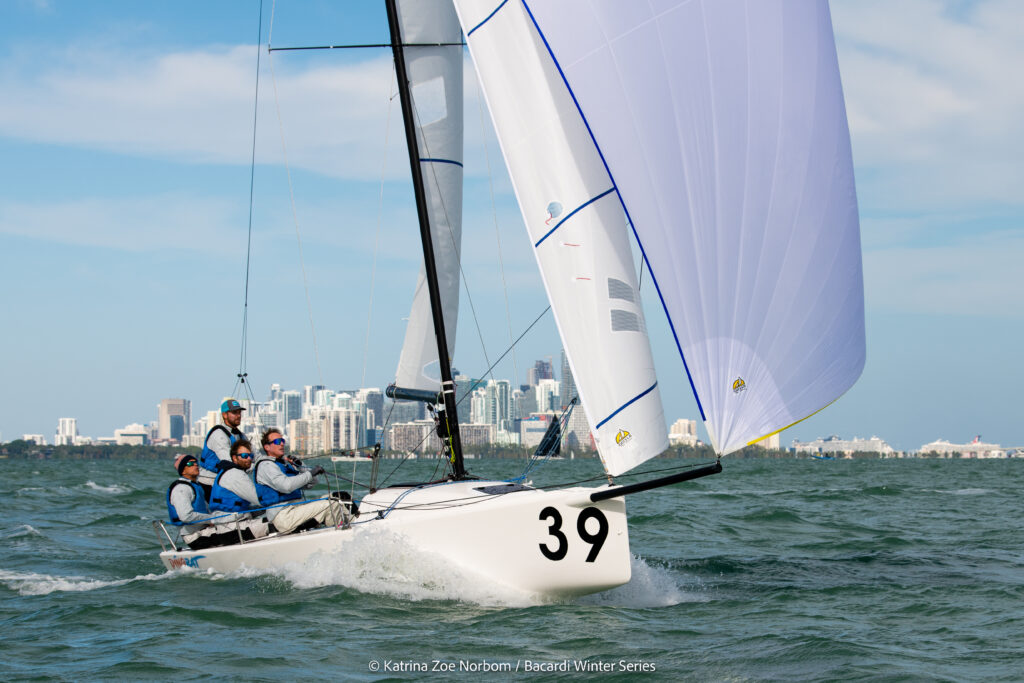 Sailors were able to get some racing in after 3pm. Pic - Katrina Zoe Norbom 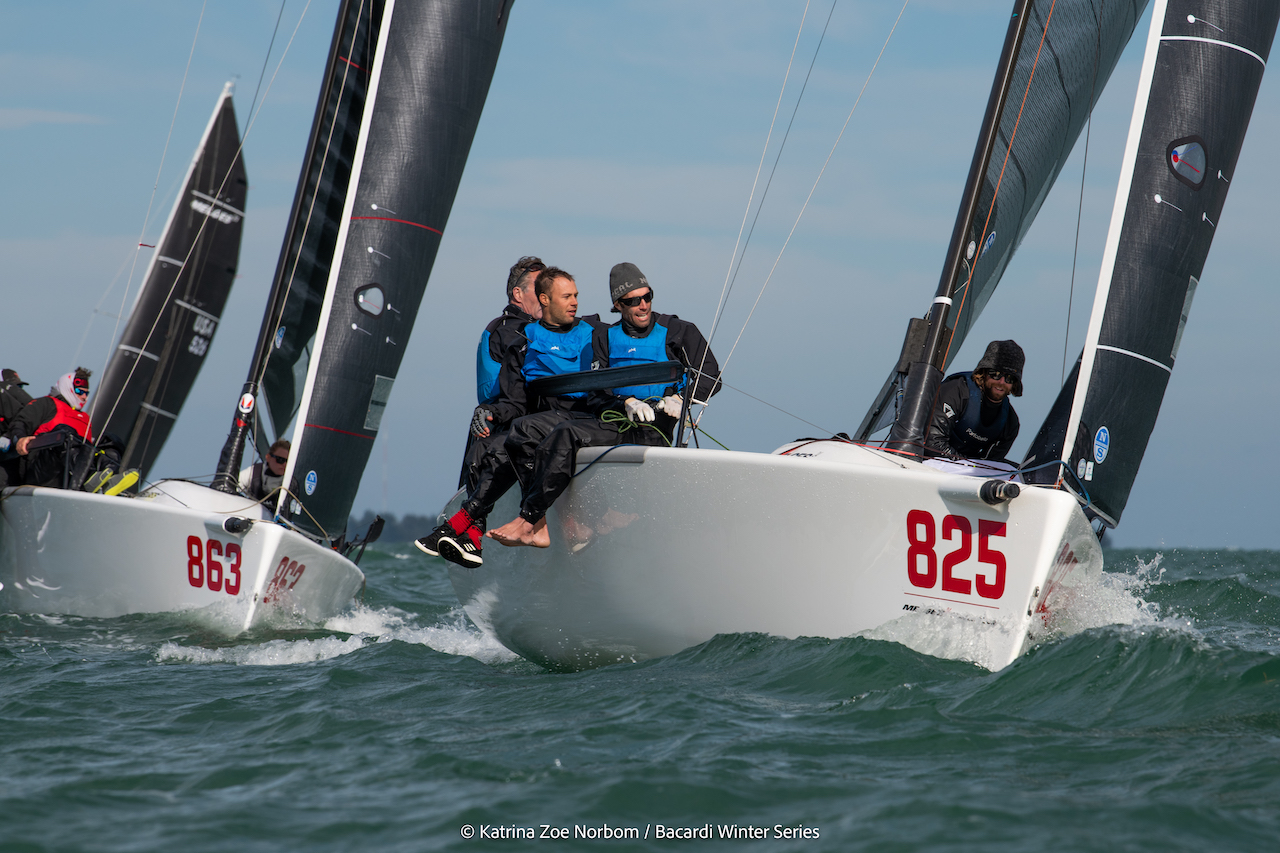 Not all bad though, as teams enjoyed the stunning and convivial host venue of Shake-a-Leg-Miami (SALM).

Four hours after the scheduled 1100 hours start time, the wind eased at 1500 hours and teams took to the track for two races in the J/70 and Melges 24 and four races for the 69F. Perfect conditions delivered fantastic racing, ‘smoking fast’ downwind legs and lots to concentrate on.

All changed in the J/70 and Melges 24 leader board, with Richard Witzel on ‘Rowdy’ and Michael Goldfarb on ‘WarCanoe’ taking over pole position. In the 69F ‘Team Tilt’ took control to win three of the day’s four races and advance into first overall.

An extended day saw everyone happy to be back ashore and enjoying this evening’s Bacardi hospitality at SALM.

Again no margin for errors in the talent-packed J/70 fleet, with points at the end of the day as tight as the start, with the top two teams on tiebreak.

In the opening race Victor Cribb on ‘Victory’ controlled the fleet at the windward mark, chased by David Jannetti on ‘Very Odd’ just four seconds behind. Staying on the plane downwind in the easing breeze was a challenge though and the tables turned. Al Minella on ‘Level 5’ sailed through to rack up a win in the opening race, follow up with a 16th, to shift them up to eighth overall.

Michael Ilbruck, Commodore of Yacht Club Costa Smeralda, followed up his fourth place in the first race to seal the second race win with his crew on ‘Pinta’, pushed hard by Richard Witzel’s ‘Rowdy’ in second and Charles Thompson’s ‘Brutus III’ in third. Ilbruck’s reward, a climb to fifth place on the leader board.

“It is an incredibly competitive fleet,” reflected Michael Illbruck, who has long-standing sailing partner John Kostecki on board. “We have been racing the J/70 in Europe and it is tough here. This is what we want and we are trying to get better. Yesterday was a difficult day for us, but we learned a lot as we always do. Mistakes make us better. Today we were the last boat at the first top mark rounding, but we had good runs.

“In the second race we had again a terrible start, and we couldn’t get going and then John, obviously, got us out of trouble and we somehow had a better feel for the boat going upwind and we had the right shifts. We had a very, very good first run, and then another good beat. I love this, I love this racing. Tomorrow is another day.”

Overnight leader, Bobby Julien on ‘Dingbat’ scored six, six and ends his day tied on 29 points with Richard Witzel’s ‘Rowdy’ team, who hold the advantage to lead on countback, from their 9.2 scorecard.

A key element of success in today’s racing were the choices made at the windward mark. As the fleet split and teams gybed out, those ahead saw their advantage decimated by the teams behind who had better pressure. The gains were made by looking behind for the puffs and gybing at the right moment to score the puff.

Michael Goldfarb and team on ‘WarCanoe’ checked out with the win from the first race of the day and advanced to second overall, but not for long as their fourth place in the second race propelled them into pole position.

Climbs for some, drops for others and a big change for Peter Duncan’s ‘Rasta Mixta’ who unsettled their scorecard with a UFD penalty in the second race and crashed to fourthfrom first overall at the start of the day.

In the opening race, things were looking good for Duncan and Bora Gulari on ‘New England Ropes’, as the two teams won the pin end and took flight in a close fight to the windward mark. But, a big left shift unsettled the train and saw many over stand on the port tack lay line, which made for some interesting port/starboard challenges at the mark. The outcome – Duncan and Gulari lost their lead.

In the second race, the breeze delivered less consistency across the track with lots of isolated puffs and shifty conditions. The race belonged to Bora Gulari, who knew he had to redeem his 10th place in the day’s opening race to stay in podium contention. Finding his groove, he led the fleet around the windward mark, with seconds between the top few boats, and kept control to race glory.

Peter McClennen on ‘Gamecock’ had his eyes on Gulari, hunting him down and rounded the second windward mark in first, going on to play the left side downwind and seal second place. McClennen’s best finish of the series so far pushed him from 12th overall at the start of the day to fifth at the end.

“Breezy, shifty, gusty conditions,” commented Peter McClennen. “The key was staying in phase at all times, and staying fast all the time downwind. We got onto the right side and we probably spent 80% of the race on one tack downwind. Super fun, super-fast, Miami super delivered and the Melges 24 is wonderful!”

In tomorrow’s two races anything can happen amongst the top three teams with just 4 points separating them, and then a small gap to the chasing pack.

Switzerland’s ‘Team Tilt’ claimed track domination, with Sebastian Shneiter steering his team to victory in three of the day’s four races. The short and sharp 10 minutes battles were intense, leaving no margin for error.

A jubilant Stuart Bithell, Tokyo 2020 gold medallist in the 49er, enjoyed the Biscayne Bay breeze, saying, “Miami is one of my favourite places to sail. The wind conditions we had today were somehow shifty and it makes for really dynamic race tracks.”

Boat speeds were again impressive on the ‘triangular’ course format in a perfect breeze of between 10-16 knots. Whilst the boats couldn’t match yesterday’s speeds, it was the youngest team on ‘Convergence’ who notched up the fastest pace of 27.11 knots.

‘Convergence’ also cracked the competition to finish second in race nine, delivering an amazing performance considering their short time on the 69F.