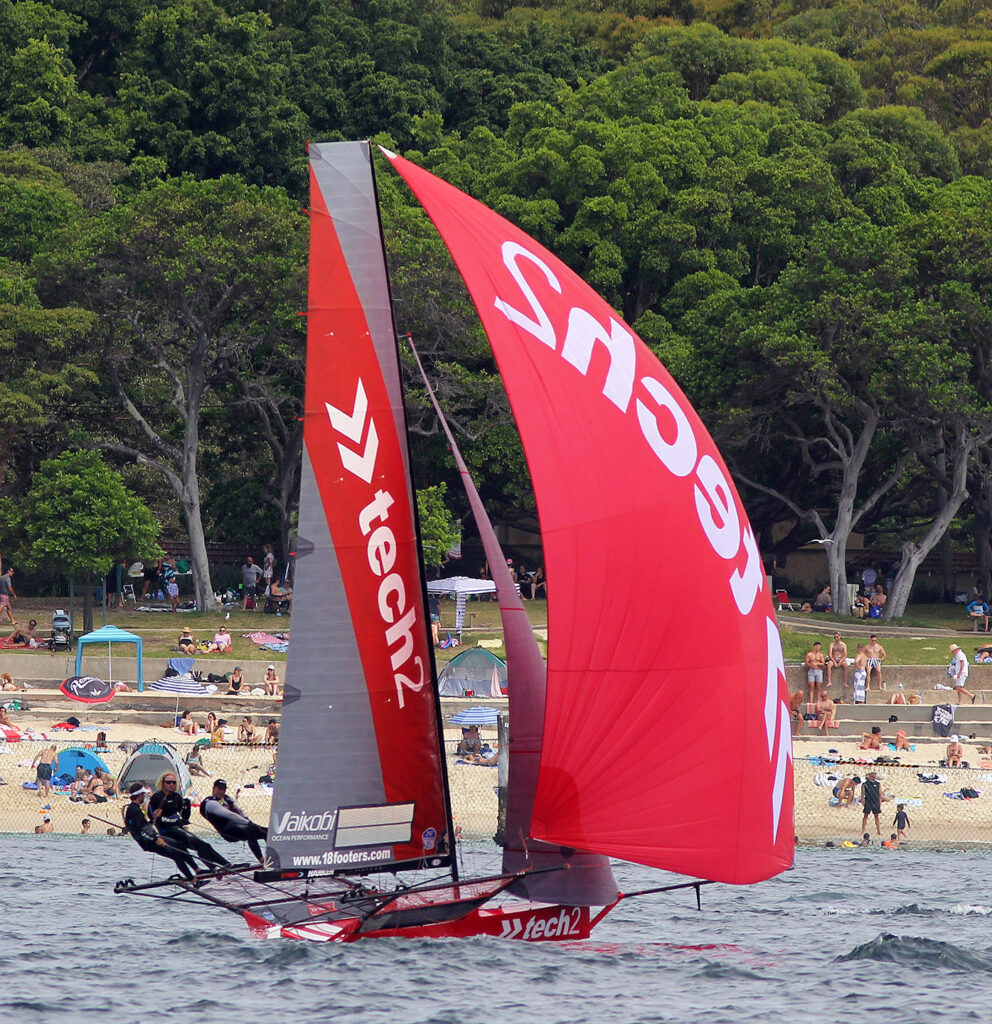 Tech2's team give harbourside beach goers a close up look at the NSW champion. Pic - 18 skiffs 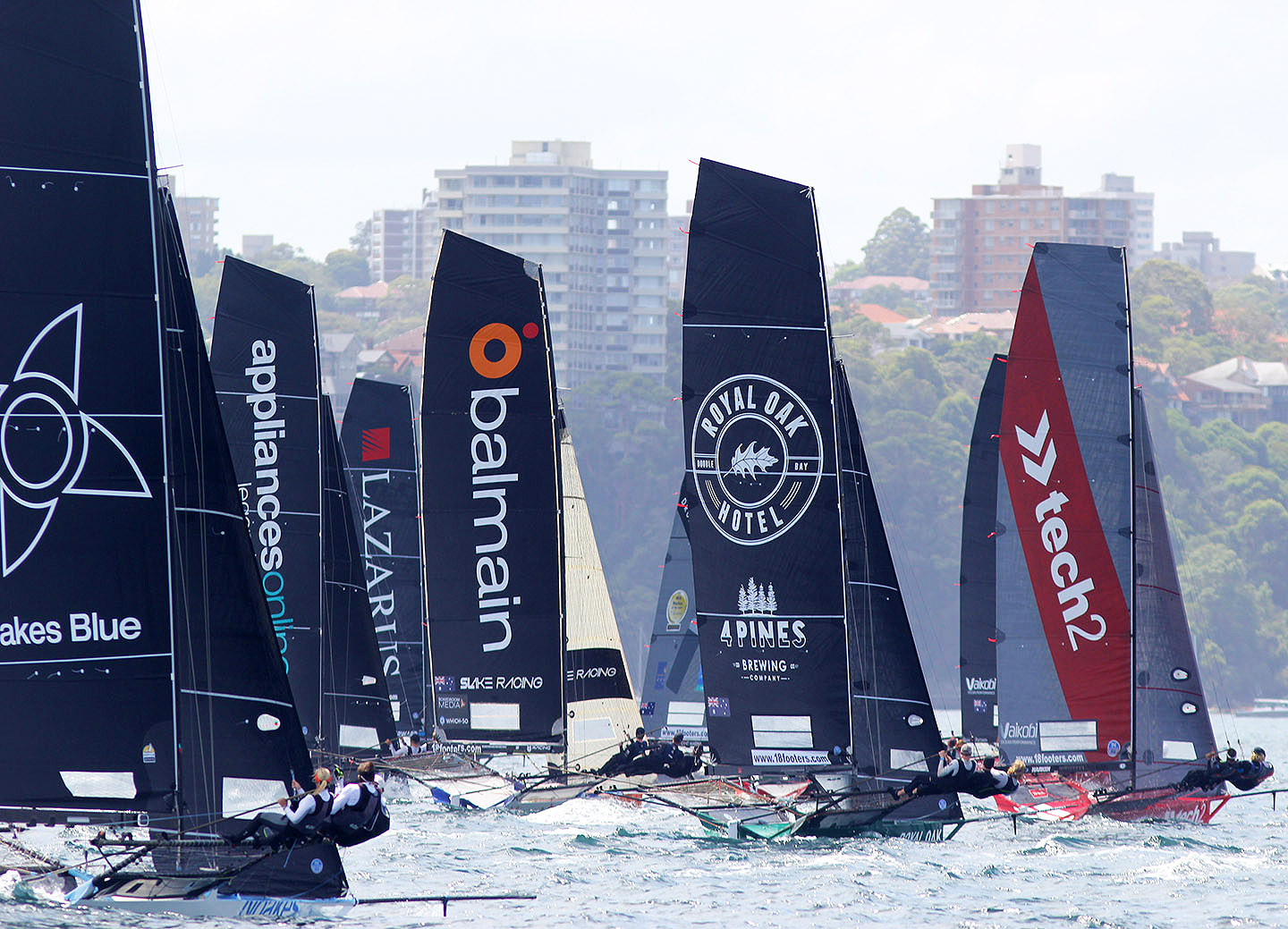 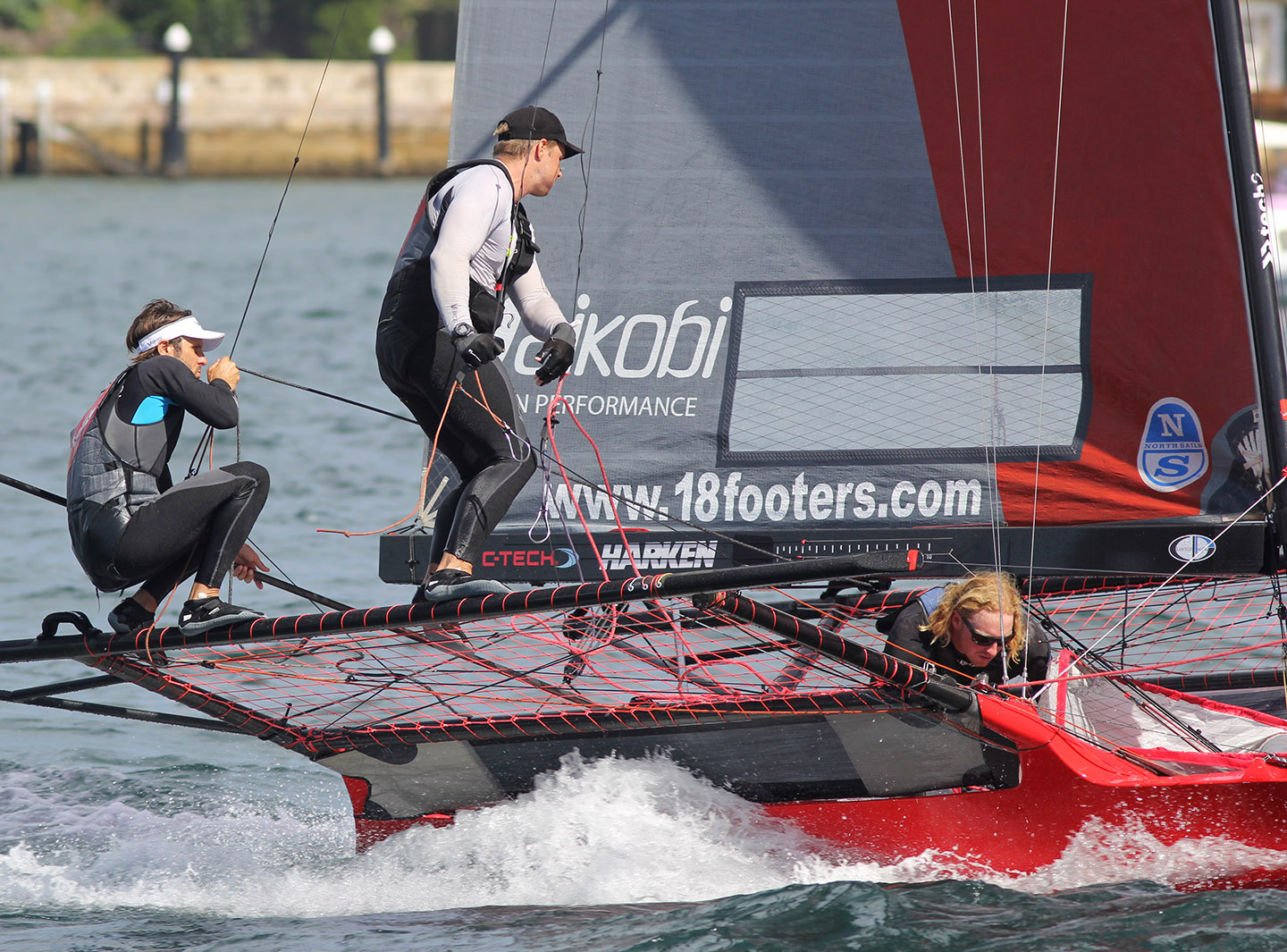 The race for fifth place on the first spinnaker run. Pic - 18ft skiffs 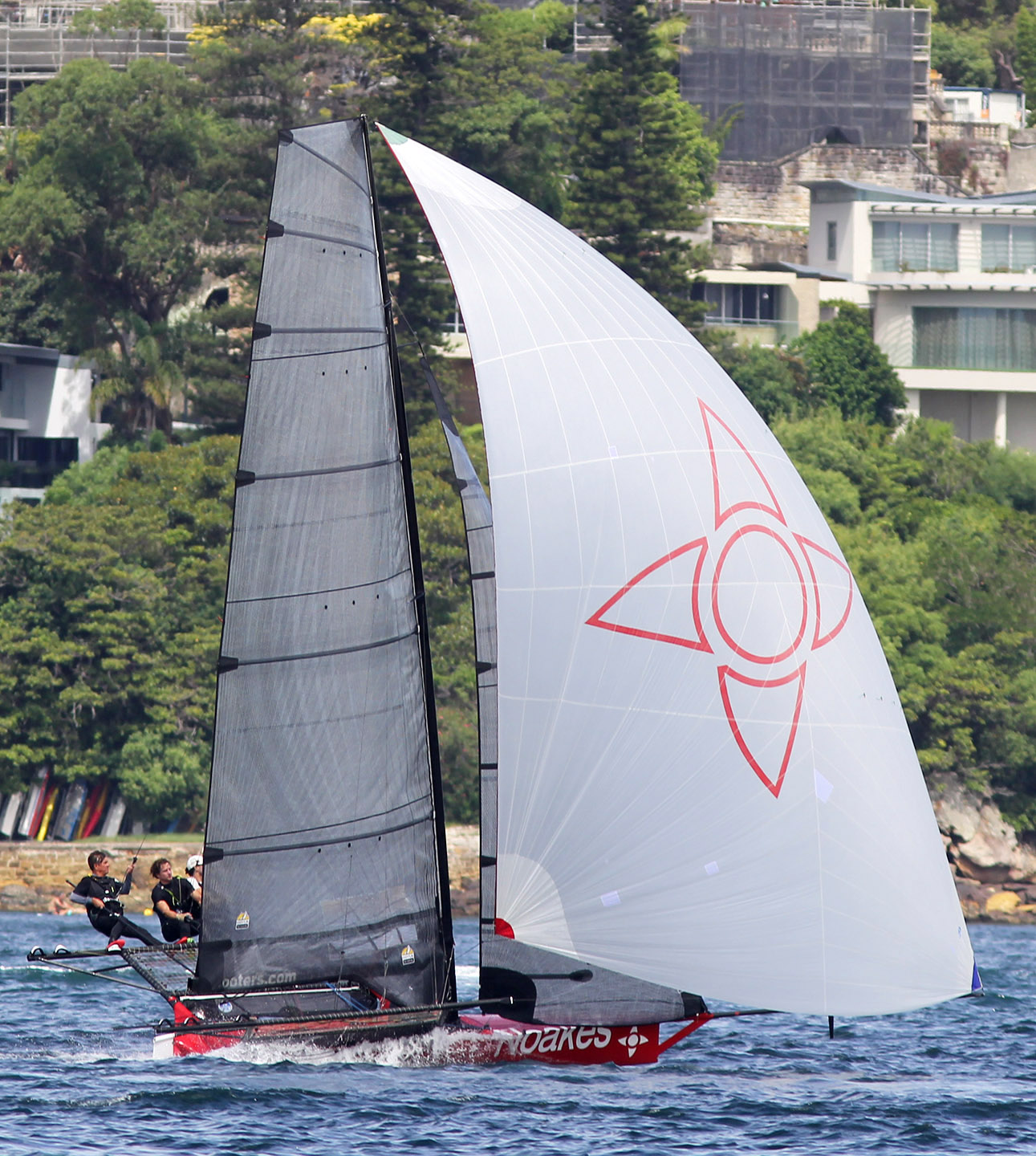 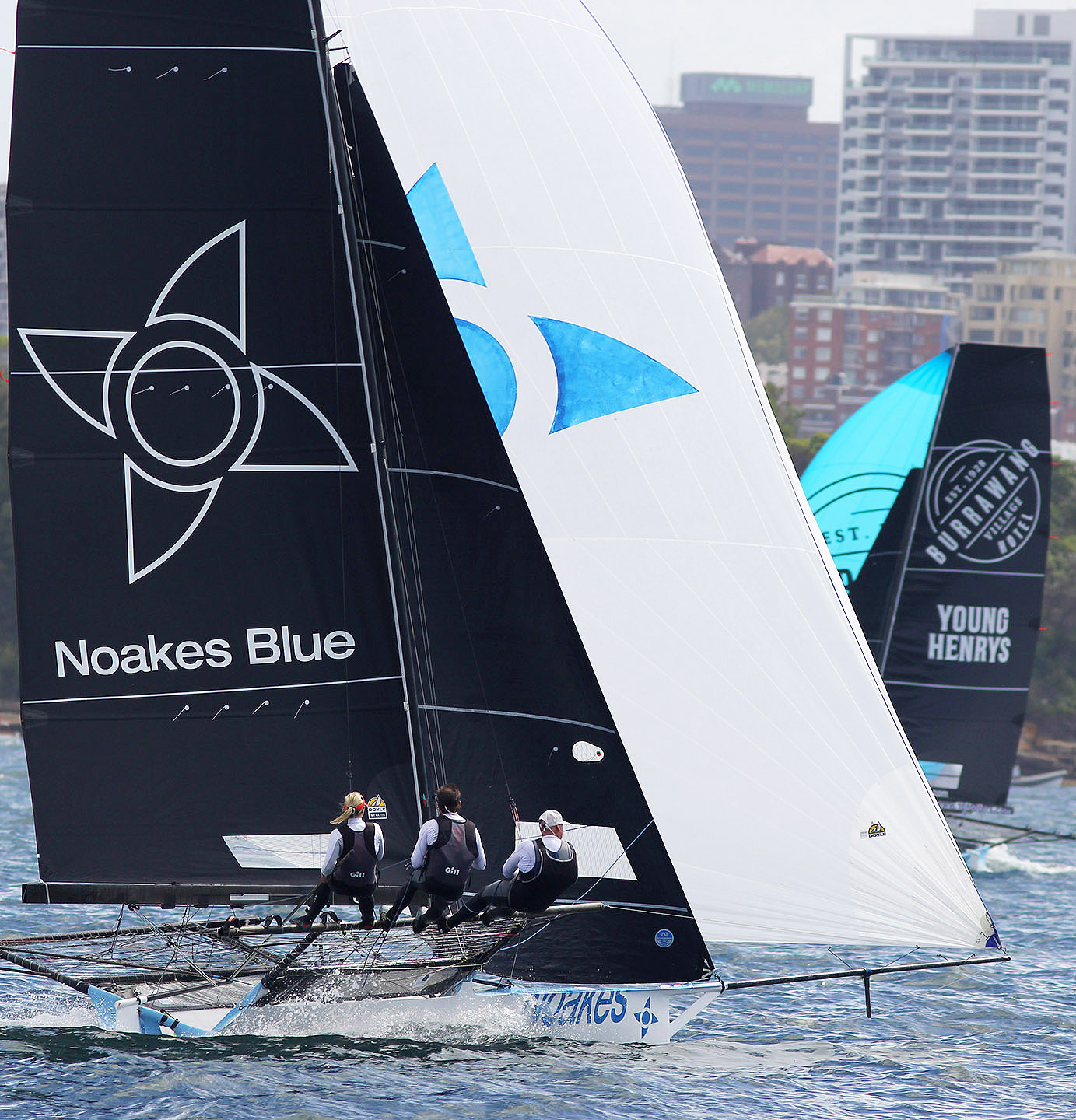 Noakes Blue on the second lap of the course. Pic - 18ft skiffs 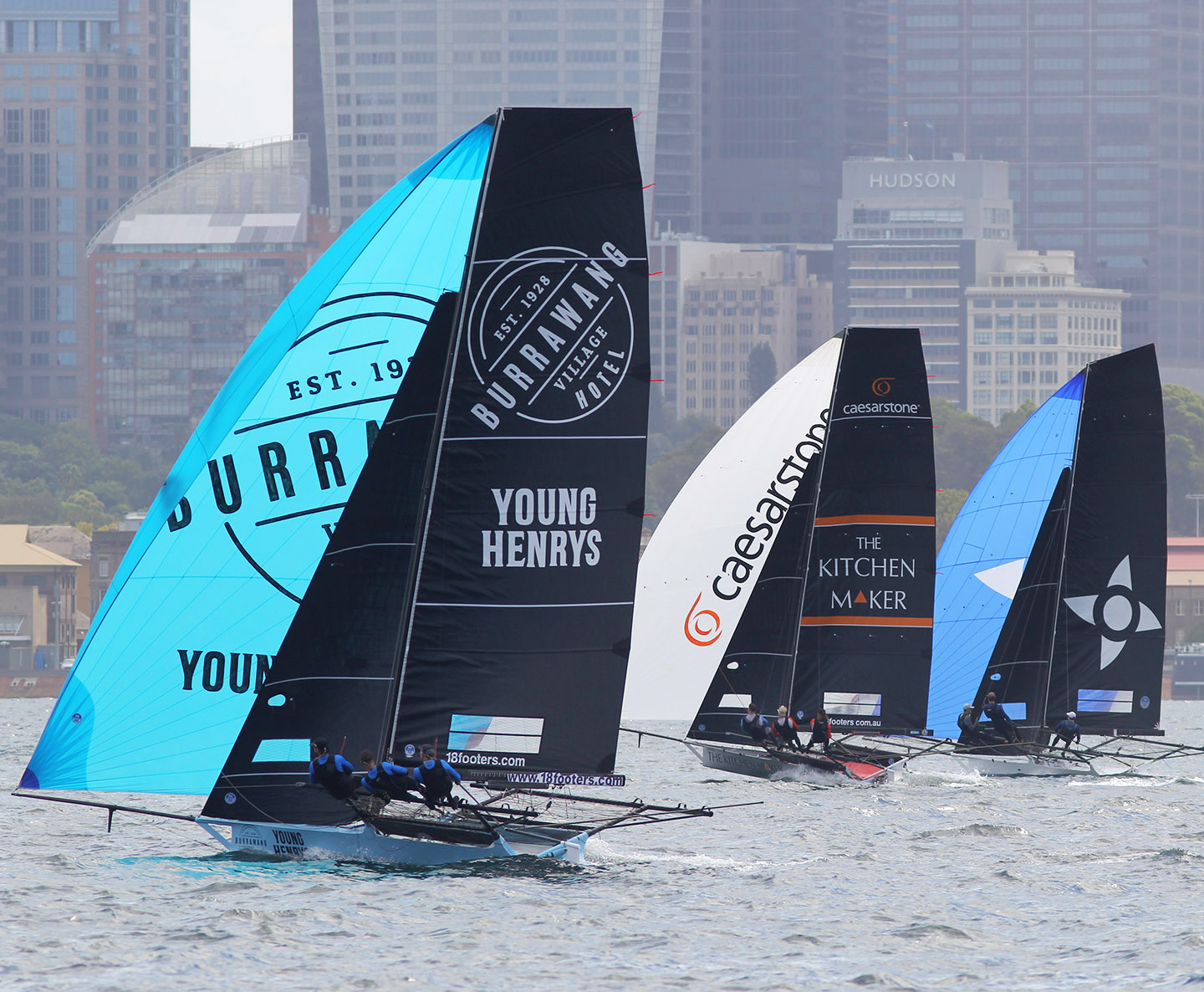 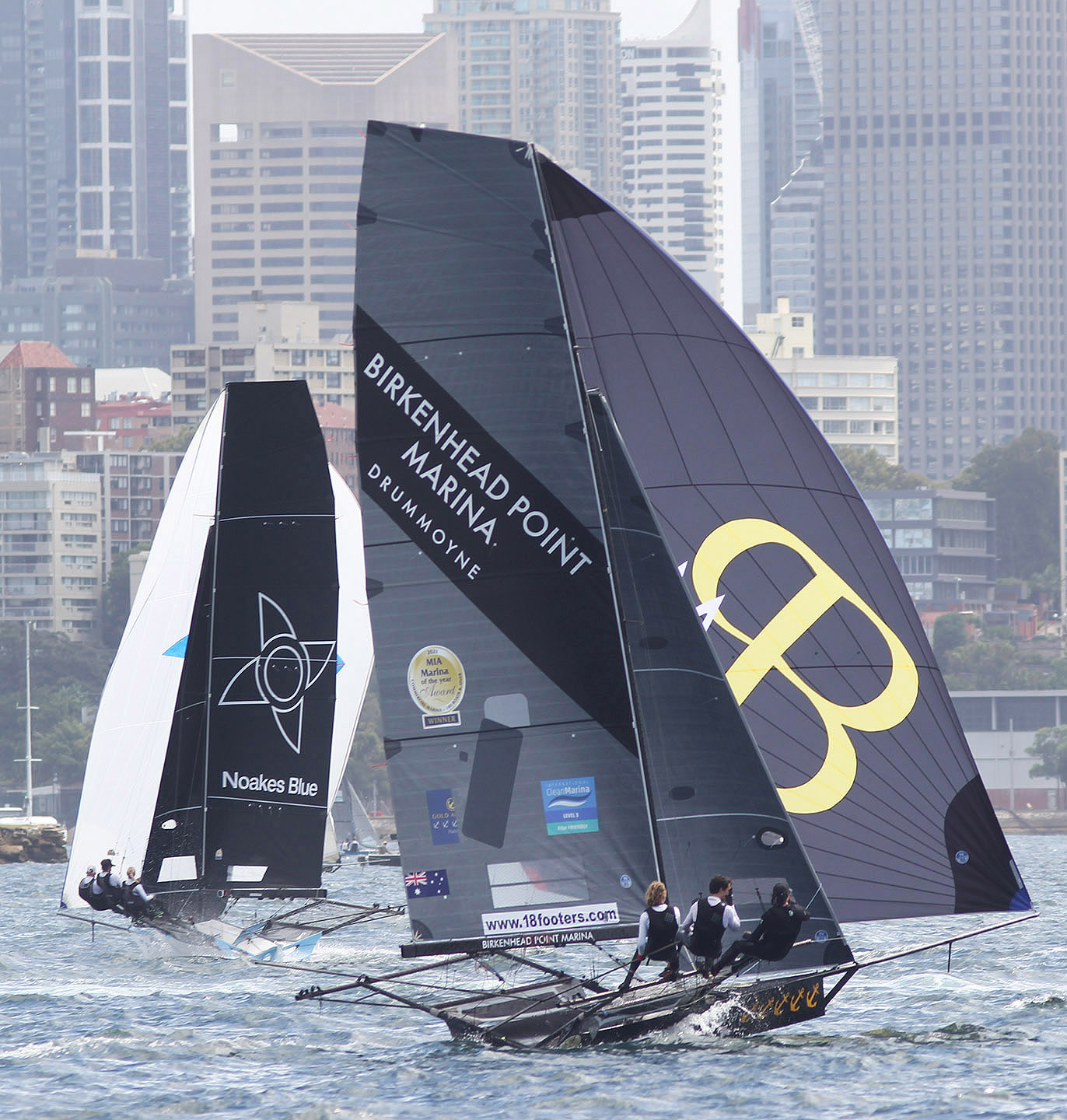 Birkenhead Point Marina on the spinnaker run down the centre of Sydney Harbour. Pic - 18ft skiffs 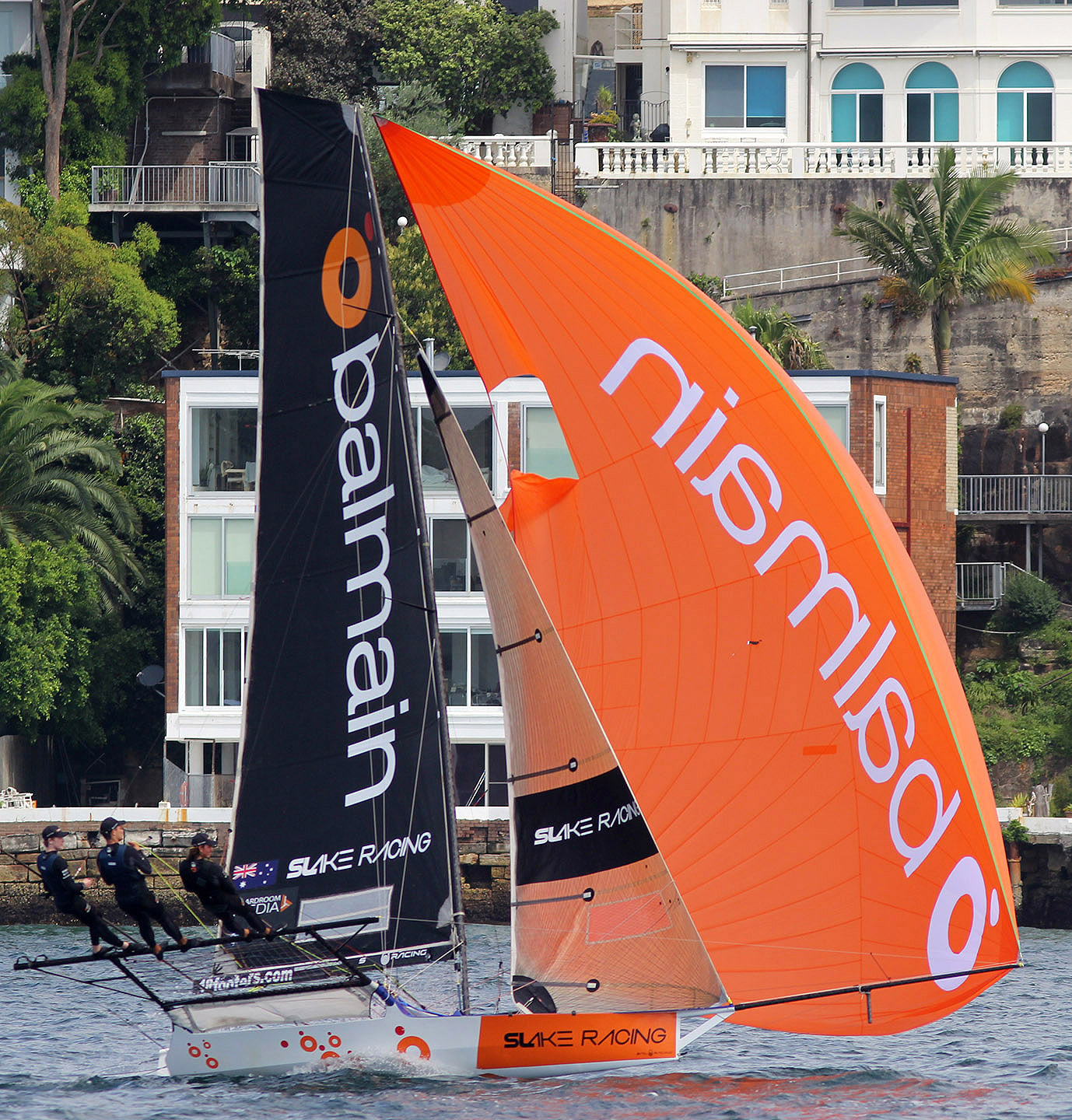 Balmain Slake battles with a torn spinnaker on the first run between Shark and Clark Islands. Pic - 18ft skiffs 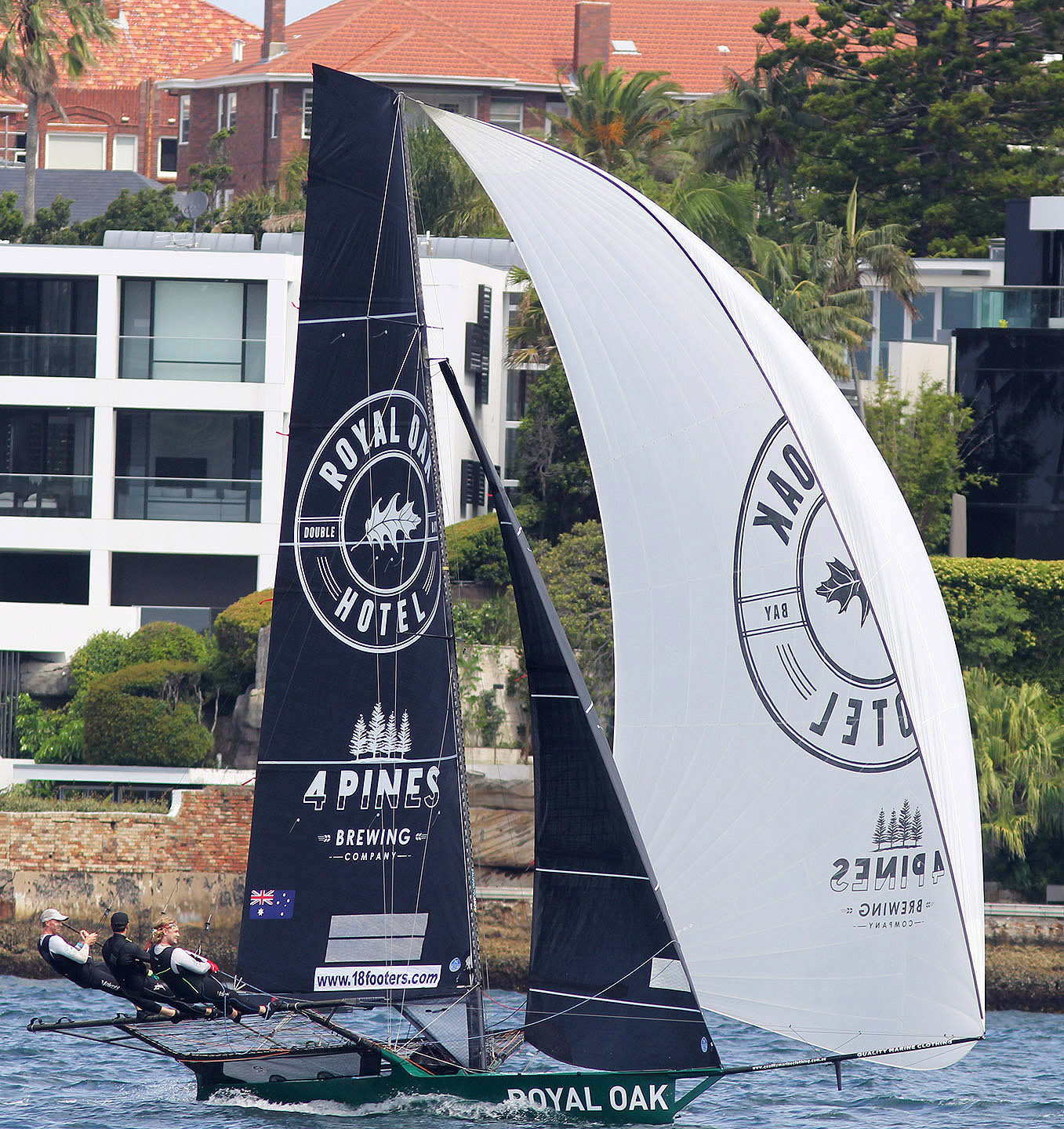 The Oak Double Bay-4 Pines was back to her consistent best to finish fifth. Pic - 18ft skiffs 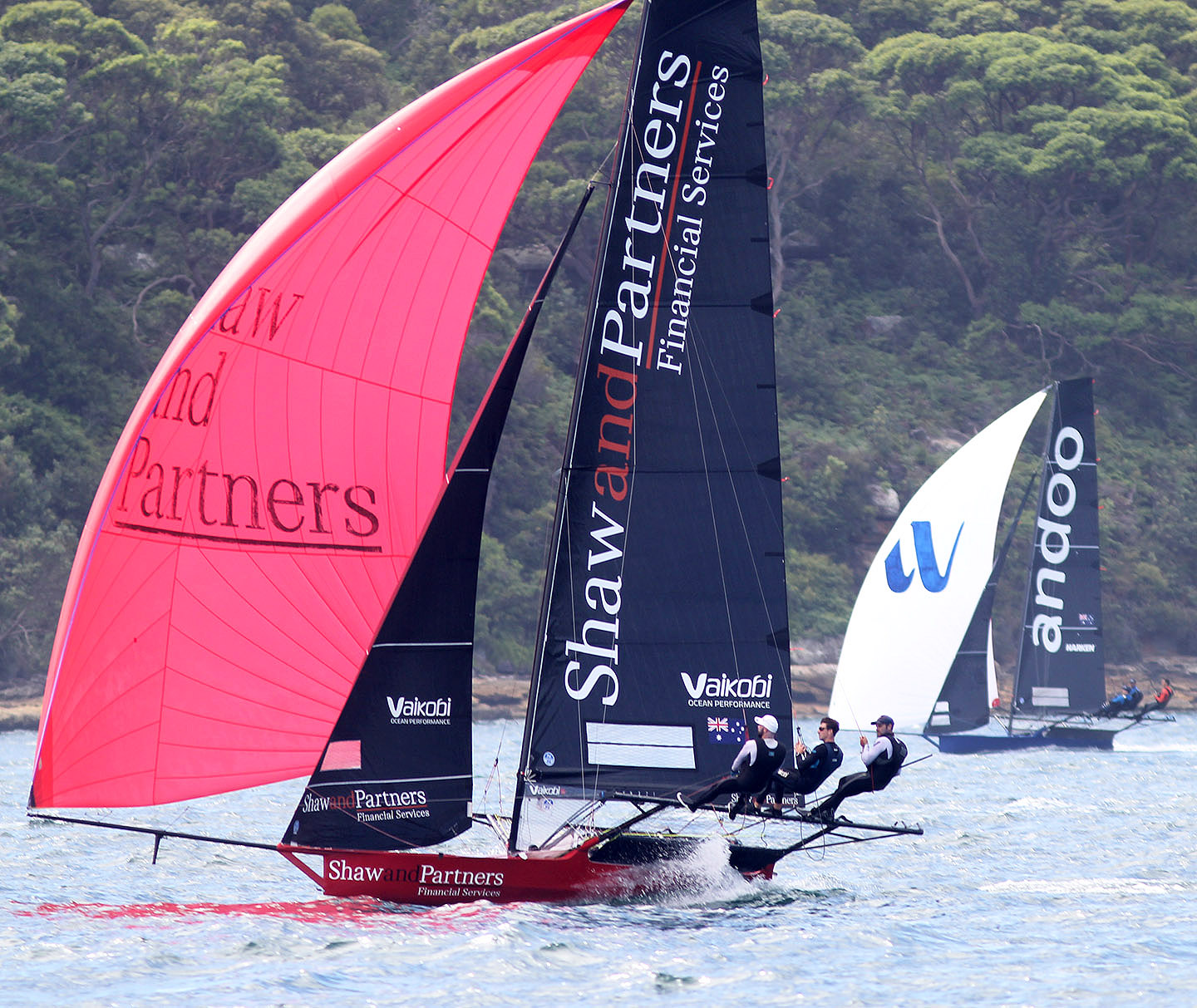 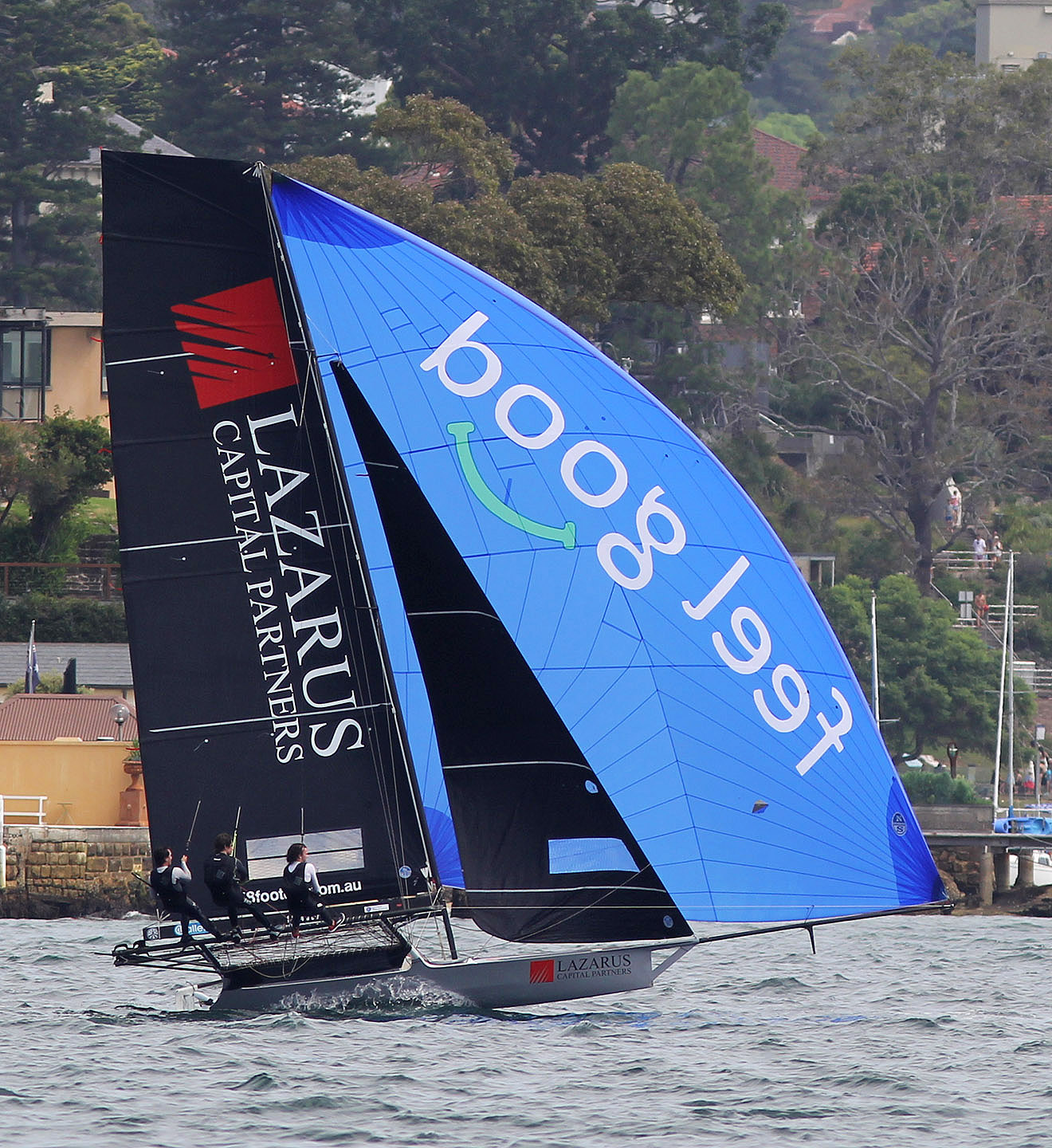 Rookie Lazarus team on the first lap of the course. Pic - 18ft skiffs

Tech2’s team of Jack Macartney, Charlie Wyatt and Lewis Brake became the 2021-22 NSW 18ft skiff champions when they dominated the fleet to win today’s final race (Race 8) of the series on Sydney Harbour.

After trailing the leader Noakesailing over the first two legs of the course, the Tech2 team showed its superior downwind boat speed to grab the lead at the bottom mark on the first lap and from that point was never really in danger of defeat.

Yandoo (John Winning), which led the championship going into today’s race, was just 3 seconds further back in fourth place, ahead of The Oak Double Bay-4 Pines (Aron Everett) and Shaw and Partners Financial Services (Steve Thomas)

Tech2 finished with a total of 16 points in the championship, ahead of Yandoo on 18, Noakesailing on 30, Shaw and Partners Financial Services on 40, and Rag & Famish Hotel (Harry Price) and Fisher & Paykel (Jordan Girdis) on 49.

With the championship on the line between Yandoo and Tech2, today’s race was sailed in a 10-knot northeast breeze and produced a close battle between the two teams over the first triangular lap of the course.

Sean Langman’s Noakesailing was in the thick of the battle as well. And when the leaders reached the windward mark at the Beashel Buoy, Noakesailing was a narrow 10 seconds ahead of Tech2 with Yandoo a similar distance back in third place.

The spinnaker run to the wing mark off Shark Island was just as tight as the three teams battled the light wind going into Rose Bay. Tech2 had reduced the margin down to six seconds and was beginning to show her downwind speed as the trio gybed and set out for the next spinnaker leg between Shark and Clark Islands.

Tech2 finally grabbed the lead on the third leg and at the bottom mark off Clark Island had edged seven seconds ahead of Noakesailing. Yandoo had lost a little ground but was still in third place as her nearest rival, Andoo, capsized on approach to the mark.

The following windward beat back to the Beashel Buoy was decisive as Tech2 powered away from her opposition to establish a 23 seconds break over Noakesailing and a championship-winning break of 1 minute 10 seconds over Yandoo.

Shaw and Partners was fourth, two-and-a-half minutes behind the leader, followed by Andoo and The Oak Double Bay-4 Pines.

Once again, Tech2 was dominating with her downwind speed and her lead was now out to around 40 seconds as the fleet headed out on the final triangle lap of the course.

Tech2’s victory was a great final build up for the team as they attempt to win their third consecutive Australian 18ft skiff Championship, which begins next Saturday on Sydney Harbour.

Today’s result sheet, final championship points, and images from the racing are attached.

The 100th Australian Championship will begin next weekend.  Race dates are:

Spectators can follow the racing on board the club’s spectator ferry, however due to the COVID-19 policy, numbers are limited.  Booking online through the club’s website  http://www.18footers.com.au/18-footers-sailing/spectator-ferry/ is essential.