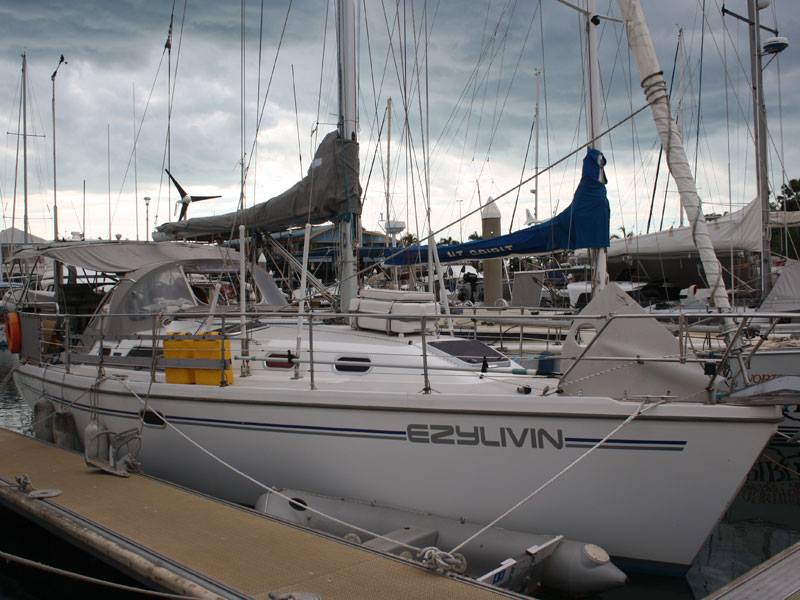 Details are sketchy, but it has been reported that 'Ezylivin', a Catalina 350 home ported in Fremantle, capsized and sank enroute from Thailand to the Indonesian Sabang Marine Festival. (The source of the story is Facebook, not the most reliable of media outlets.)

Skipper John Burn and crew are reported as being safe after taking to their life-raft. Reports and details are not clear including the cause of the sinking and whether the boat did in fact capsize. Although the yacht is registered in Fremantle, it doesn't appear to be part of Fremantle Sailing Club. It took part in the rally division of the Darwin Ambon Race in 2013 under current owner John Burn.

Update from past Commodore of Fremantle Sailing Club, Terry Baker:

TRANSLATION FROM INDONESIAN – link to original story at end of translation
Banda Aceh, Aceh Bisnis – Two New Zealand nationals managed to escape after the yachts that they had sunk in the waters of the Straits of Malacca, Aceh Province.
Information gathered between Antara in Banda Aceh on Friday, the two New Zealand nationals that managed to escape were John Richard Burn (73), who was also the ship's captain, and Douglas Greame Scott (75), a crew member.
Both sailed using a yacht with the name of the Australian-flagged Ezylivin from Jeti Kuah Langkawi, Malaysia, to Sabang Pulau Weh. They sailed from Langkawi on April 22, 2019.
John Richard Burn and Douglas Greame Scott plan to participate in the Sabang Marine Festival which will take place April 26-30 on Pulau Weh.
Head of Malayahati Class IV Port Authority and Authority Office M Said Sitompul said the two had managed to save themselves using rubber boats on their sailing ships.
“The sailboat they wiped out after hitting a hard object on Friday (26/4) at around 2:15 a.m. According to information, their ship sank so fast and both managed to save themselves,” said M Said.
The position of a sailing ship manned by two New Zealand citizens sank after hitting a hard object about 20 nautical miles north of Malahayati Port, Aceh Besar.
“When the ship sank, they immediately saved themselves by riding a rubber boat. They finally arrived at Malahayati Harbor, around seven in the morning,” said M Said.
From the container port, two New Zealand citizens were taken to the Class IV Malayahati Port Authority and Port Authority Office in the Punge Blang Cut area, Banda Aceh City.
https://www.acehbisnis.com/2019/04/26/kapal-layar-tenggelam-2-peserta-yacht-selandia-baru-selamat/