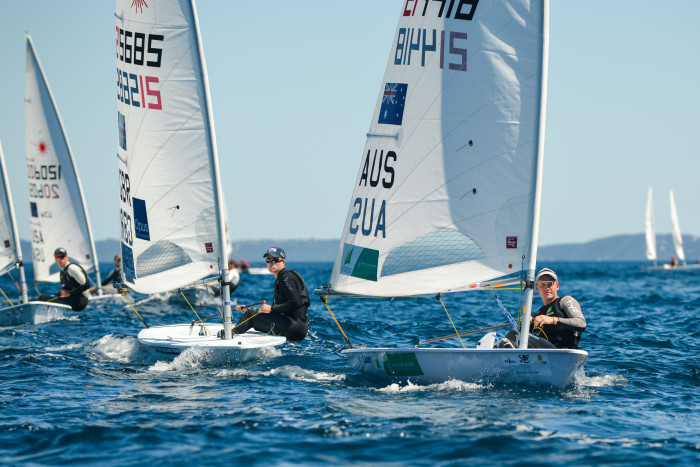 The first day of the 51st Semaine Olympique Française in Hyères saw the kind of conditions that the French Riviera specialises in: endless sun, testing breeze and diamonds dancing on the water. With the wind shifting from the northerly in the morning to almost southerly by the afternoon the best was required of the 197 sailors representing 49 nations – and the best prospered.

Laser
There is a reason some become Olympic and world champions and that is because on days like today they find a way. And for decades Hyères has had a way of finding them.

Sam Meech, New Zealand’s bronze medalist in the Laser at the Rio 2016 Olympics, won both races in his half of the two laser fleets. Meech has good memories of Hyères – a silver medal here in 2016 helped ensure his selection as New Zealand’s representative in Rio. “My last couple of events here have been awesome, so I’ve got some fantastic memories from here,” he said.

Meech tops the overall leaderboard ahead of four Australians. Australia’s Tom Burton, the Rio 2016 Olympic Champion, topped his half of the fleet with a  fourth and a third, but admitted his relief at getting through the day unscathed. “To walk away without a big score is a good day,” Burton said. “I probably gave away one point – I was second in the second race and finished third, but it could have been much worst. The second race was a little bit less stress than the first because it was so light, you’re in that position where you’re lying in the teens and you could forwards a lot and you could also go backwards a lot real quick, especially that first downwind was just too stressful.”

There was no surprise to see Burton battling it out with his perennial challenger for the Olympic spot, Matthew Wearn, who passed him in the final 100m of the last downwind to win the second race and lie third overall.

“The first race I had a pretty good start but couldn’t capitalise and the second race I had another good start and could,” Wearn said.  “I think this is my seventh time here and there are always good sailing conditions and great racing, so I always enjoy racing here no matter what the result, but I’ve been lucky enough to be on the podium once and somewhere in the top 10 most other times so I think it’s a great place to be.”

But even for Meech it was not all plain sailing. “Both races were pretty close,” he said. “I felt like I got a little bit of a gap in the second one, but they all caught right back up to me on the last run, so it was pretty stressful – especially in the first race.”

The mixed results of the last fleet to finish racing this evening were a reflection of an excitingly open field where it was much harder to pick a favourite. Emma Plasschaert, Belgium’s first ever Laser Radial world champion in 2018, could only finish 22nd in the field of 50 in the second race.

Hungary’s Maria Erdi – a rising star having gone to Rio 2016 as an 18-year-old – followed victory in the first race with a fourth place to lead overall. Another youngster, Norway’s Caroline Rosmo was third and second, to lie second. But after them none of the more established names were consistent. Australia’s Jacinta Ainsworth is in third after finishing with a third place after taking ninth in the first race.

China’s women windsurfers have arrived back in Hyères meaning business and the home favourite, Charline Picon, France’s 2016 Olympic Champion, will need all of the nerve and skill she showed to win that gold. Picon held off Peina Chen in the medal race in Rio and it was Chen, the 2017 world champion, who took the overall lead by winning the second and third of their three races. Picon was second in both to like second overall with Britain’s Bryony Shaw, the 2008 Beijing bronze medallist, in third. But China’s Yunxiu Lu, the who Picon out-raced for the silver in the world championships in Aarhus last August, is close behind in fourth and has the better discard after a consistent third, fourth and fourth place finishes.

“It was a good day,” Chen said. “The first race, I had a good start and then I went left and in the end it wasn’t very good and I was almost last at the top mark. But on the second lap, on the reach, I got the gust and I think I was the only one planing and I caught up and finished sixth. The second race I had a great start and I went all the way right and got to the top mark in sixth, but then I had the fastest downwind and was almost leading at the next mark and then passed them.

The third race I had a good start and the wind shifted and made it a very simple race because I went all the way to the left and led all they way.”

China also topped the leaderboard in the men’s windsurfing, after Mengfan Gao won two races, but it Italy’s Mattia Camboni who had the best day with a win in the second race (when Gao could only finish 21st) sandwiched between a second and third. Consistency will be rewarded at the end of the week. Camboni felt it would be his day when he headed out.

“I had a really good feeling about the day, I was feeling fast, pretty smart. If I had a bad start I was totally focused,” said the Italian with one Olympics under his belt and who only turned 23 three days ago. “It’s been a long time since I had a good day like this. I went out on the water and I said: ‘wow, I’m fast today’. I don’t know why, I feel really fit, I lost 2-3 kilos since January and now I’m the same weight as last year, when I had a really good year (he won the European Championships and finished fourth at the World Cup in Enoshima). I put on some weight before the Miami world cup because I thought it would be better, but it wasn’t, so now I’m back to my normal fitness. Also, mentally I’m relaxed, I’m not feeling too much pressure.

“I had a really good start in the first race, I ran out to the right and it was the right side, so I turned the first mark in third I think and I finished second – I wasn’t really close (to winning). The second race I didn’t have a really good start, but I went right and it paid a lot. I rounded the first mark third or fourth and then on the downwind I caught the other guys and won. They gybed too early, I gybed at the right moment and passed them.”

Results and standing after the first day of the Semaine Olympique Française in Hyères: