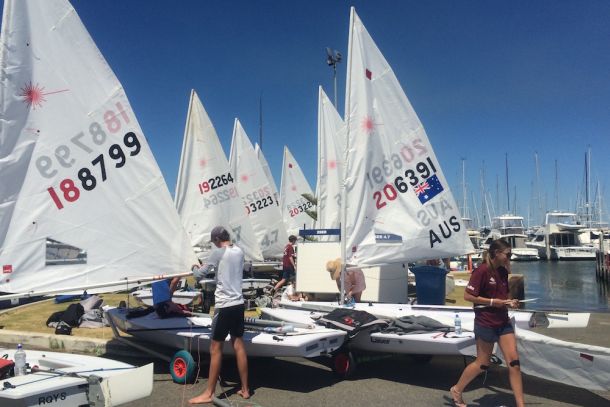 The 2015 Australian Youth Championships (7-10 January 2015) start in Fremantle today with the Nation’s top youth sailors in a variety of classes facing four days of fresh sea breezes, known locally as the “Fremantle Doctor”.

175 U19 sailors from six states and two territories will compete in six boat classes (420, 29er, Hobie 16, Laser 4.7, Laser Radial, Bic Techno 293) for the National title honours. In addition, four sailors from Japan as well as 12 from New Zealand will contest the Championships. Host Western Australia has the biggest contingent at the start line with 94 sailors, followed by New South Wales (54) and Victoria (38).

Hot favourites in the 420 class are local sailors and 2014 Australian Sailing Youth Team members Emerson Carlberg and Lachy Gilmour. The pair won the 420 National title last week-end with a nett score of just 22 points, a ten point buffer over the second placed crew of Calum Gregor and Hugo Christensson of Hong Kong, and are aiming to defend their 2014 Youth Championships title at Fremantle Sailing Club this week.

Western Australians and 2014 Australian Sailing Youth Team’s Nia Jerwood and Lisa Smith were the female champions at the 420 Nationals, finishing a creditable sixth overall and should feature strongly also.

Bunbury’s Koombana Bay Sailing Club hosted the Hobie 16 Nationals.  Only four Hobie crews have entered the Youth Championships and the best of those at their national competition was “Johnny”, sailed by Shaun Connor and Sophie Renouf, who finished a very creditable 11th in an open fleet of 35 boats at the nationals.

Some of the toughest competition in youth classes will come in the Laser class, where both 4.7’s and Radials will be competing. Mandurah Offshore Fishing and Sailing Club hosted a brilliant National series in brisk conditions last week. In the Laser Radials it was a case of the apprentice beating the master when 2014 Australian Sailing Youth Team member Alistair Young (WA) defeated dual world champion Tristan Brown (WA) to take the title. On that form one might be tempted to back Young to win the Youth title as well, but that would be under-rating the quality of WA’s Conor Nicholas and NSW yachtsman Finnian Alexander.

Victorian Brody Riley won the Laser 4.7 national title, winning eight of the twelvd races sailed and goes into the Youth Championship as a strong favourite.  Behind him though, Dunsborough’s Caelin Winchcombe and New South Welshman Jordan Makin were closely matched and certainly pose a threat.

An intense 29er nationals series at Jervois Bay Sailing Club (WA) last week needed a protest committee to sort out the final result but Sydney’s Kurt Hansen and Jim Colley combined well for their win, taking out seven of the 16 races. They are back at the Youth Championships this week. Queenslanders Kyle O’Connell and Tom Siganto were not far behind, also winning a couple of races. Western Australian Annabelle Davies combined with Hayden Hunt to win the top youth female skipper award and NSW’s Amelia Stabback and Pia Doyle led the all-girl crews in the Nationals.

In the Bit Techno 293 windsurfing class dual Australian Youth Champion and 2014 Australian Sailing Youth Team Member Jock Calvert (TAS) is keen to make it his third title: “I’m aiming to take out my third title and to make it into the Youth Team again to have another crack at the Youth Worlds at the end of this year”, a confident Calvert declared before the start of racing. “It looks like it will be a windy regatta, which will favour me being bigger and heavier, but we have some good young guys coming through so it should be a close regatta and good racing.”

The Techno 293 windsurfers did not conduct their national series in WA so it will be interesting to see how their sailors cope with the fresh breezes off Fremantle.

The 2015 Australian Sailing Youth Championships together with the National Class Championships as well as the 2015 Queensland Youth Week in July count as a selection event for the 2015 ISAF Youth World Championships to be held in Malaysia in December 2015. See Yachting Australia Selection Policy for further details: http://www.yachting.org.au/performance/youth-sailing-team/2015-youth-team/asyt-selection-policy-2015/.

2015 Australian Youth Championships results will be made available here: http://www.fsc.com.au/sailing-events/2015-australian-youth-championships/