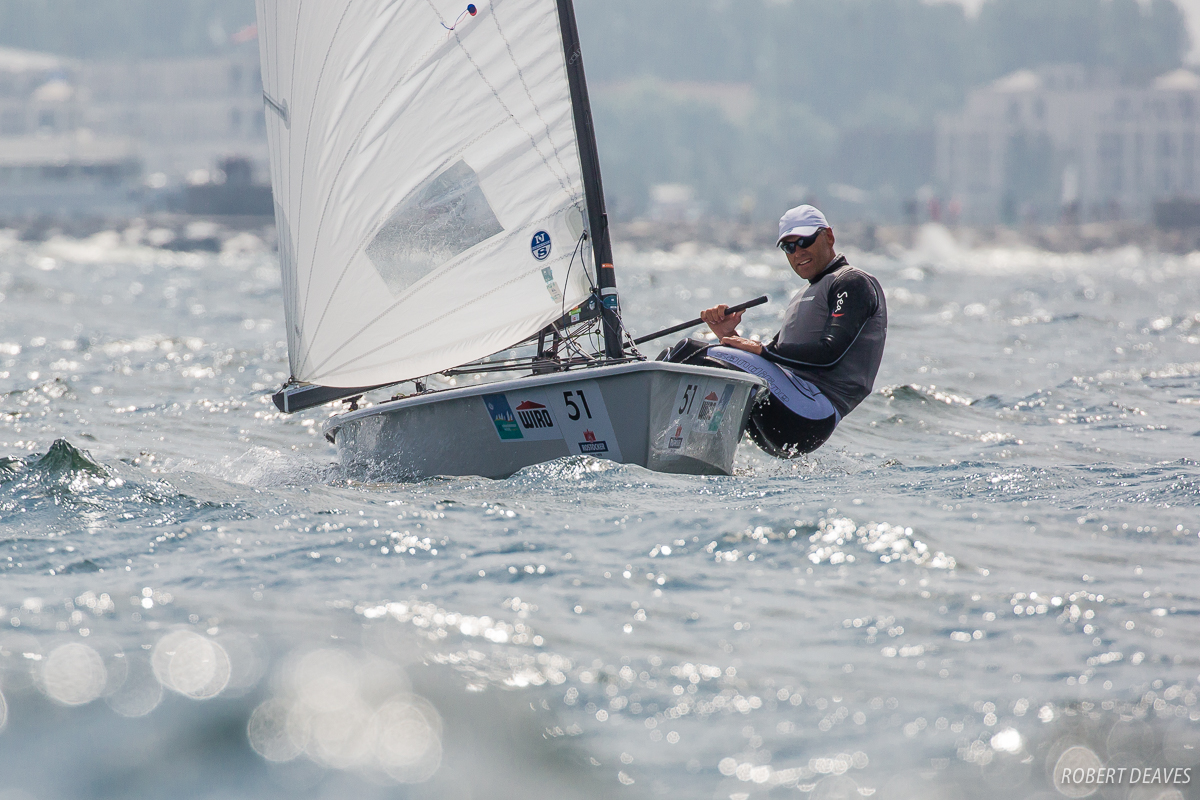 Fredrik Loof moved to the top of the OK Dinghy World Championship in Warnemunde, Germany, after two more races were sailed on Friday in near perfect conditions, taking a win and a second to lead the fleet by two points with just two more races to sail on Saturday.

Jan Kurfeld and Andre Budzien are locked together in second and third, but with only 12 points between first and eighth, the world title is still wide open.

The two races on Friday means the opening series is completed, so for Saturday the fleet will be split into gold and silver groups. There were 141 entries for the Championship, but with only 126 boats taking part, the Gold Fleet is expected to be the larger of the two fleets.

After Thursday was lost because of no wind, Friday produced the conditions that everyone loves to come to Warnemunde to experience: westerly winds, big seas and challenging racing.

Yellow fleet was dominated by Lars Johan Brodtkorb and Charlie Cumbley. Richard Burton was fastest out of the blocks in Race 5, holding a nice lead at the top, but Brodtkorb was not far behind and was soon challenging the lead. It was a very tight finish with Bo Petersen closing fast, but Brodtkorb took the bullet from Petersen and Cumbley.

In the second race Cumbley found his own wind and sailed way for a huge win from Brodtkorb and Budzien.

Two sailors also dominated the blue fleet. Loof found the front in the first race to win from Thomas Hansson-Mild and Kurfeld, but in the next race it was Jim Hunt finding the best shifts on the left to round ahead.

Loof and Kurfeld were having their own battle behind him, and held each other up, which let Hunt escape to win. A second for Loof gave him the overall lead for the first time, while Kurfeld had to settle for third.

Brodtkorb didn’t have the best day on Wednesday, but is now right back in the mix.

“I was struggling because I was really not ready for sailing, but today I felt better and I think that showed in the results because I felt much better on the course.”

“I had really good starts near the pin end in both races and tried to play the shifts – they were quite big I thought – but they were quite long, so you didn’t really have a choice to stay on the tack.

“In the second race Charlie had a little bit of leverage on me from the start, so he had the better path to the mark and it was all over from there so he just won it by miles.

“I managed to take the lead near the gate, but it was really tight, so I didn’t have a comfortable lead. On the last downwind I was third and then Budzien and Charlie started fighting on the last reach and I went to leeward of them and then up to the finish I tried to control both of them.

“I was behind him but I was finishing on the favoured side because I had crossed him. It was so tight; I think maybe five boats finished in ten seconds. That one felt good. I really needed it to get back in to contention.”

Speaking on the fleet and the competition, Brodtkorb said: “It’s great racing. The conditions were great, so we couldn’t really ask for more. The fleet is really nice and I didn’t really get this experience last year, but I kind of prefer this kind of racing, but the shifty part is also kind of fun. I am looking forward to tomorrow and the finals.”

Former world champion, Hansson-Mild, also had a better day with a second and a fourth.

“It was a good day but not good enough unfortunately. I had a second and a fourth. In the first race I was up there leading, going well on the downwind as I usually do.

“I got a good gap but this was the first time I was in blue fleet, and I was still in the yellow mindset, so I started beating when there was still one reach to go. I lost both Loof and Kurfeld, but on the last beat up to the finish, I got back to second.”

In the second race, “I did an average start in the middle, worked my way up to fourth after fighting myself around the course. It was a hard struggle. There are many guys that are really, really good.”

He commented on the high level and the health of the class, “I love competing in Warnemunde, with the big waves; they remind me of the days up in Umea. Warnemunde is always nice as a venue – and with 140 boats with two fleets it’s magnificent.

“The level in the class is just getting higher and higher, so for me I have to step up every year, and that’s not easy.”

With just two races to go, former Olympic champion, Loof, has a small but useful lead.

“We had nice races today. It was paradise sailing with 10-14 knots, small shifts, nothing major, On the downwind you just had to find a good track but once you got that it was easy, so a good day.”

Speaking about the OK Dinghy fleet, “This is a really nice fleet with good competitors. The guys really know the boat and they are helping me out a bit, so I am getting around the course quite nicely. So I’m very happy.”

He indicated he would like to carry on sailing the OK Dinghy. “I want to sail in a class where you don’t need to train too much but still need to keep fit, and I enjoy this kind of sailing, like the Star and the Finn, but the OK is a lighter and easier boat to sail, but in a way is more technical so your body movements are really important, so I really enjoy it.”

While the top three have a slight points advantage, the title is still wide open, at least down to eighth place. One mistake by anyone is likely to prove costly at the end of Saturday’s racing.

Within that group there are far too many world, European and national titles will possibly count, as well as some Olympic medals, so when they all meet together for the first time in the gold fleet on Saturday, it is going to be a fascinating conclusion to another great OK Dinghy world championship.

Racing is scheduled to start on Saturday at the earlier time of 11.00.