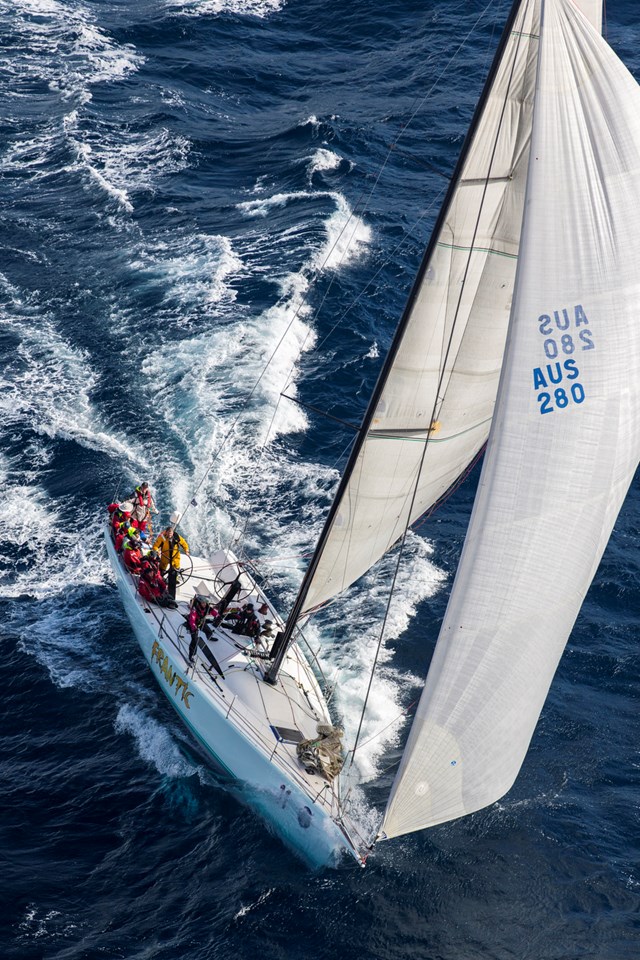 Michael Martin’s Newcastle TP52 Frantic is the line honours winner and new record holder of the PONANT Sydney Noumea Yacht Race, riding the sou’east tradewinds conveyor for most of the four days two hours 23 minutes they spent between the start and finish lines.

Frantic took a whopping one day 19 hours 12 minutes off the previous race record set in 1991, the weather window setting up a dream run for not only a race record for the first Sydney Noumea race in 25 years, but for most of the fleet to finish under the previous fastest time.

A downhill reaching and running race suited the TP52. “It was neck-and-neck with the front group until the last afternoon,” Martin said at Port Moselle once berthed. “We had some of the best downhill sailing we’ve ever had. That’s why we sail!

“When the breeze got up to 25-30 knots we just smoked. Any kite work you had to go and see the bank manager; we blew up a fractional code zero and a kite – I’m still crying about that – but it was worth it.”

Second across the finish line was GBP Yeah Baby, the Ryckmans twins, Marc and Louis’ Welbourn 50. The historical tally favoured GBP Yeah Baby over Frantic but a lack of training pre-race and blowing out a key sail within the first four hours proved costly according to Yeah Baby’s skipper Lindsay Stead.

“We were excited to see Frantic on day three and have a dosey-doe with them to the finish. Congratulations to Frantic; we would’ve should’ve could’ve beaten him, but that’s yacht racing and they did an awesome job.”

Third over the line on a rainy afternoon in Noumea was Smuggler, Sebastian Bohm’s Rogers 46 which is a strong contender for the IRC overall win in the Cruising Yacht Club of Australia’s longest ocean race.

Smuggler also leads ORCi and PHS divisions overall and could take the treble.

Sibby Ilzhofer’s Dare Devil is the next yacht due to finish, likely to be mid-morning on Friday June 8.

South-east winds are expected to remain on the race track for the duration of the 1,064nm endurance race and the last boat in the fleet, currently Michael Graham’s Santana, is 400 nautical miles from the finish and due Sunday morning.

Other than two early retirements and stories of sail damage filtering through as yachts complete the PONANT Sydney Noumea Yacht Race, it has been a pretty straightforward event.

The fleet can be continuously tracked via http://noumea.cyca.com.au/standings/