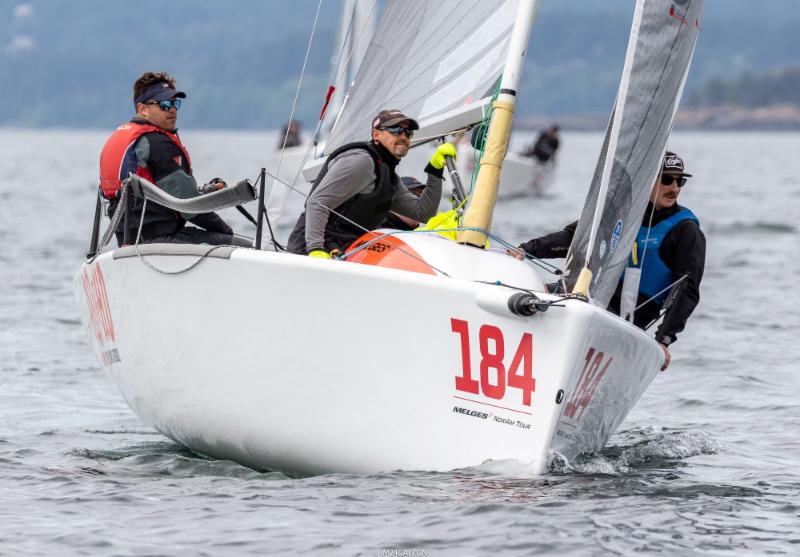 ADHD CAN184 by Brad Marchant

06/06/2018
June 5, 2018 – Victoria, BC, Canada – Light breeze was the protagonist of the opening day of the 2018 Melges 24 World Championship in Victoria BC, Canada, where forty-one crews from five countries gathered to determine who will be the next one to achieve the Melges 24 Worlds title after Italian Gian Luca Perego's Maidollis success at the 2017 Championship in Helsinki.
The Race Committee presided by John Abel waited for the breeze to fill in, displaying AP flag ashore, before sending the fleet out to the water from the Victoria International Marina.
The shifty and light breeze only allowed to complete one race in the inaugural day of the 2018 World Championship and the American crews were the indisputable protagonists of the regatta: the “birthday bullet” was scored by Alan Field's WTF USA829, with Steve Hunt calling the tactics celebrating also his birthday today.
“It was a light air flight and we were over the line in the start, so we had to come back and sailed a very good race. Also we might have a little bit of luck, because it's my birthday today. Alan sailed very fast and we all stayed really calm and the team sailed a really nice race. The wind got really weird in the last run and died out and the current just pushed the top finishing boats over the finishing line. The Race Committee did a great job and they tried hard to start another race while waiting for a wind to fill in and it almost pulled it off, but it wasn't enough, though,”  Steve Hunt, tactician of the WTF  said.
WTF was shortly followed on the finish line by Brian Porter's Full Throttle USA849, already World Champion in San Francisco 2013, and Bruce Ayres' Monsoon USA851 in third position.
The Canadian entry ADHD CAN184 by Brad Marchant, closing the race in seventh position overall, leads the provisional Corinthian ranking, with just one point margin over Matt MacGregor's Good Enough USA806. The provisional podium of the Corinthian division after the first day of racing is completed by another Canadian entry, Hold My Beer CAN591 by Mike Bond.
Principal Race Officer John Abel was saying that the wind was just above the class minimum speed throughout much of the race. “Crews found the going slow up the first beat due to the counter current which then turned to advantage on the downwind leg. The wind fell to very light on the final downwind leg, but the current allowed all boats to finish within the time limit from the first finisher. The wind teased the Race Committee a couple of times later in the day but never reached a level suitable for running a race.”
The racing for the Melges 24 Worlds' title will resume on Wednesday with a first signal schedule at 11am.
Overall Top 3 after Day 1