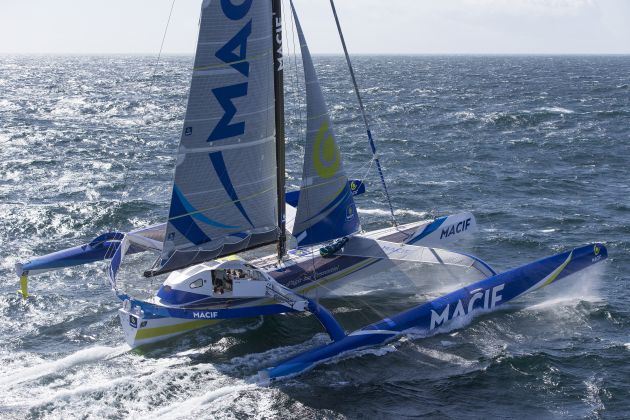 Since the MACIF trimaran was launched on 18 March, François Gabart has done a lot of solo-training to prepare his round the world record attempt at the end of the year. As of mid-May, he will switch to “crew” mode, with his sights set on The Bridge, a transatlantic race between St Nazaire and New York, in which he will compete with five sailors introduced below.

François Gabart is used to sailing mostly single- or double-handed. Below he explains just how different it is to sail with a crew on board the MACIF trimaran.

–    Manoeuvring is much faster

“The first difference, of course, is the physical aspect. Manoeuvring is at least four times faster with a crew than it is single-handed. This is because there are four of us on the winches, furling, hauling in, lowering and hoisting the sails, plus one crew member at the bow and one at the helm. This changes everything!”

–    Someone is always on deck, so there is greater safety and peace of mind

“Sailing with a crew is much less stressful. When you sail single-handed, you are constantly under pressure and you must always listen to your boat and stay alert, even when you're resting. However, when you're with a crew, with two crew members always on deck working the sheets and at the helm, it is a whole lot safer.”

“Naturally, with a crew, you're more often on the offensive, you change the sails more frequently and you steer 98% of the time. This means that you can really sail on the edge, on one float, and you can reach really interesting speeds, while there is a greater level of safety. This is what makes The Bridge interesting; we are halfway between the launch of the MACIF trimaran and the Route du Rhum 2018. We have already made progress and it is going to be very interesting to push the boat harder, to test her limits and to reach her full potential. You can only do this with a crew.”

–    A different role for François Gabart

“In The Bridge, I won't stand watch; I will be in charge of sailing but also coordination. This crew leader role, trying to get everyone to work together effectively and cheerfully is right up my street!  I've been doing this on shore for several years now and it will be interesting to adapt this to the sea. Of course, I will also mix with the crew: I have my pointers on board, established through constantly being on deck for two years. I don't want that to change. With the single-handed round the world ahead of me at the end of the year, it is essential that I keep these sensations.”

Designed for single-handed sailing, the MACIF trimaran will not be refitted for The Bridge. François Gabart and his crew are perfectly happy with this choice: “As the project has been focused on single-handed sailing since the start, with three important dates in three years (round-the-world record at the end of the year, Route du Rhum in 2018, and a race round the world in 2019), we concentrated on the ergonomics of the living area for one person only. Instead of refitting the boat, the crew will need to have the philosophy of adapting themselves to the boat. It'll be a bit like camping; we will probably be all a bit tight in the cockpit, but we’ll get organized and it will last less than 10 days.”

François Gabart has chosen a crew of six sailors to race The Bridge. The skipper of MACIF introduces them below.

“Pascal has been with us since the boat was launched and he knows her very well. We raced and won the Transat Jacques Vabre together. He also helped me to prepare The Transat last year. He is one of the most experienced multihull ocean-racing sailors. He is also capable of pushing the boat harder and increasing its speed considerably, both at the helm and on trimming and that's what I expect of him in The Bridge.”

“Like myself, Yann will be the second crew member to have a task that only he will carry out and that will be to take pictures as we sail. I really like what he does as a media man and I hope that he will help me progress in this area, so that I will have the right reflexes for the round-the-world. However, he will not just be the media man. He will also crank the winches, trim and steer. What's more, he has lots of experience in ocean racing, in the Mini, the Volvo Ocean race and on other large trimarans.”

“I'm introducing them together as they are both part of the MACIF trimaran’s technical team. For the project overall, I felt it important that they should see the boat in real racing conditions. This will add to the list of ideas for future changes to the boat, and they will both be valuable sources of information for our router, Jean-Yves Bernot, for the next single-handed events. They are also highly competitive and they are there to win the race!”

“He is the latest addition, since he has just joined the team. We have known each other for over 20 years, since we sailed on Optimists together. We get on very well with each other. He is both experienced in ocean racing (winner of the mini Transat in 2013, sailed on MOD70s) and in flying boats (in particular foiling Moths). He shares with us the unceasing desire to sail as fast as possible. In addition to his sailing skills, Benoît constantly suggests new ideas and he has an ability that I really admire, which is to always question himself in order to progress.”

25 June: Start of The Bridge (Race with crew between St Nazaire and New-York)

21 October: Start of the standby period for the single-handed round the world record attempt