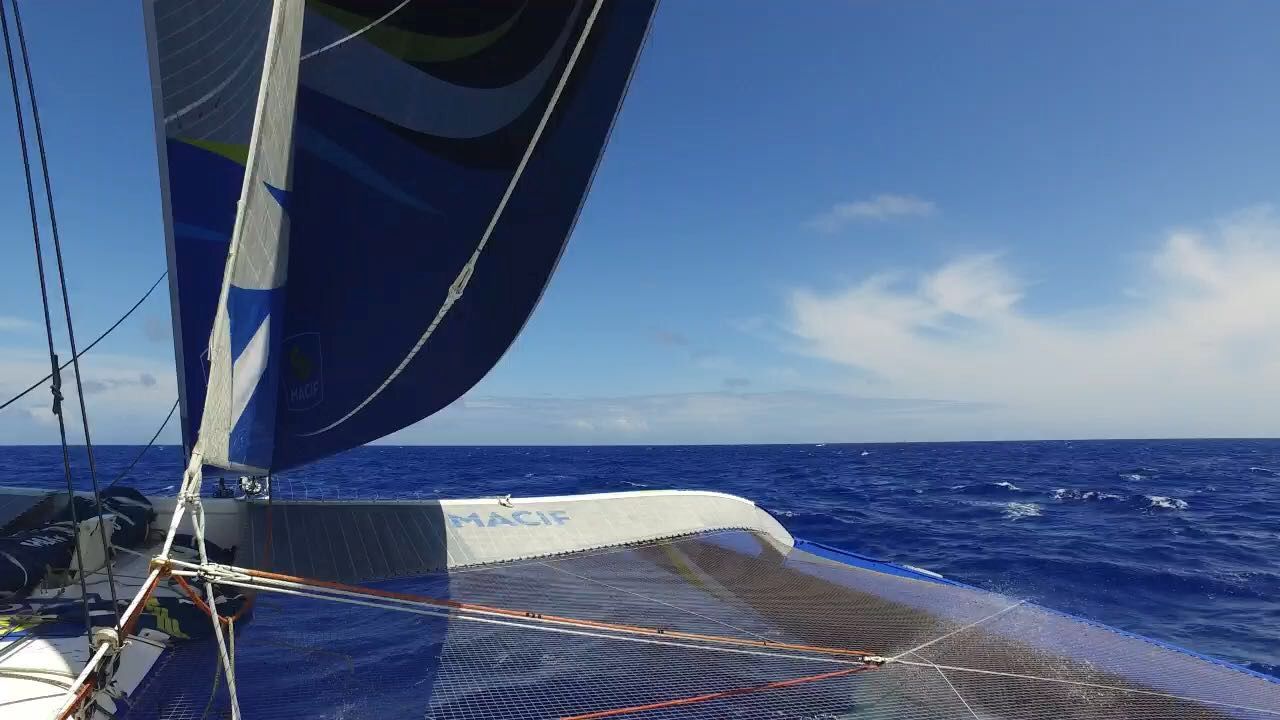 In sailing 818* miles from Monday to Tuesday afternoon, a figure that may yet change this evening, François Gabart has overtaken the legendary limit. He pushed the MACIF trimaran hard to avoid being caught in strong winds behind him and in doing so he became the first single-handed sailor to sail a distance of over 800 miles inside 24 hours. He has pulverized his own record of 784 miles, dating back to 3 July 2016.

What was his average? 34 knots, i.e. 63 km/h! What does he think of this? “I’m delighted. Records are made to be beaten. That’s how you progress. The sensations at these speeds are pretty extraordinary. The boat flies and there’s a blend of power and lightness.”

Not the sort of guy to rest on his laurels, the skipper of the MACIF trimaran immediately added: “It’s not the main goal right now. The idea is to finish this round the world first”.

When François Gabart left Brest on Saturday 4 November, at 10:05 AM, he was spared any technical incidents. The first real alert came on Monday, when a mainsail batten broke, forcing him to haul it in and begin a quick repair job which went well.

“The batten broke forward (near the mast). Nine centimetres were missing.  As there was a little extra astern, I managed to push it forwards. The sailing is not perfectly taut, but it’s by no means a bad job. I wanted to avoid sailing with a broken batten as the wind was lifting, as it could have torn the sail and damaged the mast. Often, small do-it-yourself jobs like that don’t deteriorate too much if you catch them in time. I have now dealt with the worst of the problem”, said the MACIF skipper happily, during a radio session this Tuesday, at the Macif headquarters, in Niort, at which many of the group’s employees attended.

He also praised the speed at which his team reacted when the damage was identified: “When there’s this sort of technical problem, because they know the trimaran so well, they are quicker off the mark than I am, when it comes to finding solutions. It’s “Hello Houston, we have a problem!” and back on shore they think of solutions that I work on at sea”.

In the Roaring Forties! Following a little over ten days of racing, François Gabart, who noticed the temperature had lowered by ten degrees in 24 hours, entered the Roaring Forties at midday. These are the latitudes of the Great South and he will stay with them for some time.

“It’s the start of a long conveyor belt that will take me to the Cape Horn, in places where you really can’t come about. It’s wonderful to be able to sail in places like this at high speed for days on end”.

The last routings show him rounding the Cape of Good Hope, the first of three legendary capes, on Thursday morning, setting a time of approximately 12 days. This is roughly two days less than Thomas Coville, the round the world record holder, who rounded it in 14 days, 04 hours, and 44 minutes last year.

When we mention this to François Gabart, he can’t believe it: “I’m a dreamer, but honestly, 12 days? I wouldn’t have dared believe it in my wildest dreams. When we looked at hypotheses at the start, we said that if we reached Good Hope in the same time as Thomas, or even a day later, we would be happy.”

However, the MACIF skipper doesn’t want to get carried away: “It’s great to start with a small lead, because this gives us a better chance in the miles to come. Anything is a plus.  Now, we just need to stay lucid. There’s a long way to go yet. I hope the success will stay with us for the route to come.”

With 2 and a half hours of sleep in 24 hours, between Monday and Tuesday, François Gabart has had little sleep.

“The business with the mainsail didn’t stop me from sleeping, because it didn’t last long. It was more because the waves shook me about,” he said. “But I slept well enough to be properly in form. The rest of the time, I remained lying down, which rested my muscles, especially as I didn’t manoeuvre much these last days; just one change of sail”.

His physical condition is fine, and his mental condition is as good as ever, which will be important when he tackles the Great South, the centrepiece of this round the world.

Follow François Gabart’s record attempt on the MACIF trimaran on the map: http://bit.ly/MACIF-CARTO-TDM