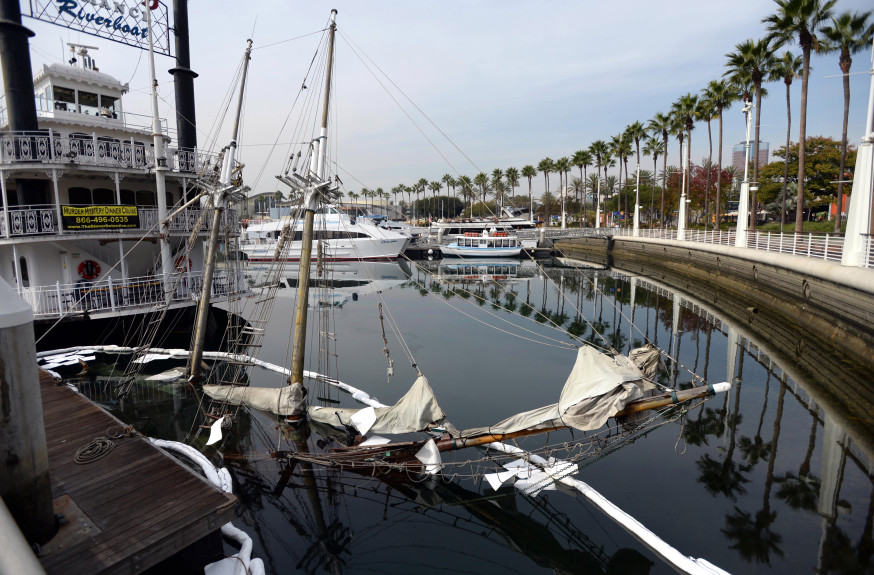 A 40 foot wooden sailing ship that sank at a dock in Rainbow Harbor. Long Beach Calif.

Crews on Monday were working on salvaging a 40-foot sailboat that sank in Long Beach’s Rainbow Harbor, according to authorities.

The boat was completely underwater when it was discovered by maintenance crews before 9 a.m. Monday, Long Beach Fire Department Capt. Pete Kusel said.

The boat sank near Dock Four in Rainbow Harbor, which is by the Grand Romance Riverboat, which hosts events and cruises, according to Kusel.

Bill Barker, who owns the Grand Romance, said the sail boat also belongs to him. “I guess it got a leak in it and it sunk,” he said.

Barker described it as a replica wooden pirate ship that was built in 1968. He said people often stopped by to take pictures of it.

Barker said he’s making arrangements to float the boat back to the surface so he can get it repaired. “It’s just a wood boat so it won’t hurt nothing,” he said.

Kusel said the boat also leaked some oil into the water as it sunk, but fire crews responded and set up booms in the water to contain the spill.