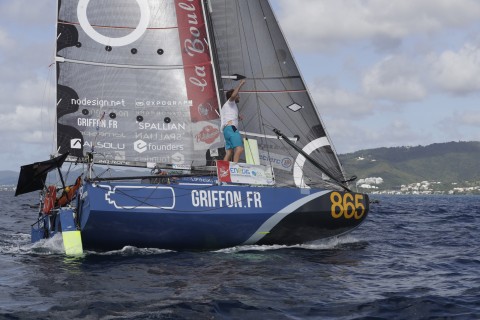 Amidst all the fanfare of the finish, the race continues… Indeed, there have been a succession of arrivals in the port of Le Marin, but for the overwhelming majority of the racers, there are still some days to go before they reach their holy grail and the celebratory rum punch of the finish, synonymous with being part of the clan of sailors who’ve done the Mini.

In a few hours’ time, the Mini-Transat La Boulangère pontoon will have accommodated five prototypes and the first of the production boats. Following on from Ian Lipinski (Griffon.fr), Jörg Riechers (Lilienthal), Simon Koster (Eight Cube Sersa) and Andrea Fornaro (Sideral), Martinique is now preparing to welcome Keni Piperol (Région Guadeloupe), the darling of the Antilles arc and, almost at the same time, Erwan Le Draoulec (Emile Henry), who is about to become the youngest ever winner of the Mini-Transat.

Production boats: all to play for in the race for the podium

There are currently four boats within a 20-mile radius astern of Erwan Le Draoulec. Though Clarisse Crémer (TBS) is managing to hold onto her second place, hot on her heels is Tanguy Bouroullec (Kerhis Cerfrance) who, should he fail in his bid to secure second place in the overall ranking, may still make the podium if he manages to make up his 2h15mn deficit in relation to Benoît Sineau (Cachaça II). Suffice to say that the last few miles are likely to be extremely tense and the slightest error may well prove very costly. Clarisse Crémer, who appeared to be slightly below par for some days, now seems to have the bit between the teeth again since the fleet bunched up again. That said, in an easing breeze which is gradually veering as it shifts a little further south, the slightest separation may well increase in scale to the detriment or the delight of the others. In principle, this latest wind shift looks set to favour those furthest north, who might well benefit from a better angle to make the channel between Martinique and Sainte-Lucie.

As the chasing pack homes in on the finish, further back in the fleet there are the rumblings of the solidarity observed since the Cape Verde islands. Several competitors have opted to hunt down performance as a pack, agreeing on which strategy to adopt and following through on it. Some have been forced to find a dodge when technology lets them down. In this way, Melchior Treillet (Boulègue) and Julien Mizrachi (UNAPEI) have got into the habit of consulting each other on which route to follow, because sailing in convoy is far more reassuring and sociable. Unfortunately, the microphone on Julien’s microphone has given up the ghost. Too bad. Melchior will simply put forward some strategic options and Julien will reply yes or no by hitting his VHF button once or twice respectively. Did you understand me R2D2?

Quotes from the boats at the finish:

Jörg Riechers (Lilienthal): “It’s natural that Ian’s won. He put together the perfect project: he bought the best boat, he trained to ensure he was ready and he’s talented; you can’t do better than that. You could almost write a manual: how I won the Mini-Transat. Mine is an anarchistic, hippy project. I’ve come along with a new boat, I didn’t train and I’ve finished second. This hasn’t been an easy transatlantic race: in upwards of twenty knots of breeze, I had to take the helm as the autopilot couldn’t keep up. I didn’t get enough sleep; around two to three hours a night. The boat wasn’t originally designed for this configuration as she was supposed to have foils. In the end, I told myself that in the seas you encounter in the Mini-Transat, foils are not a solution. The Mini’s too small to sail with foils.

My southerly option really was a considered choice. Each time I climbed up to the north it was stormy, further south I encountered more stable conditions. What’s clear is that the new designs with their scow bows perform far better. However, I still believe that, given the way I put this project together, finishing second is almost a miracle. It’s worth a Vendée Globe or a Route du Rhum.”

Simon Koster (Eight Cube Sersa): “This third place suits me to a T. It’s pretty much in line with the goal I set myself. After the first leg, the game remained wide open, even though there were a few people in front. As per usual, the Atlantic crossing reshuffled the cards. Already, there was Ian (Lipinski), who could only battle against himself. Our boats are too similar and I have a slight speed deficit in relation to him. I would have needed a different boat like the 800 (Erwan Le Mené’s boat) to stand a chance of worrying him.

With regards the foils, we’re really going to have to rack our brains to analyse the pros and cons in terms of the weight estimate and the use you get out of foils. We know it will be impossible to have a boat that flies all the time, so the aim would be to have foils that aren’t a disadvantage when they’re not in use.

As for scow bows, we should have been doing this for a long time. It’s impressive to see how powerful these boats are. There’s no longer any doubt about whether they work or not. For bigger boats, the only issue relates to coming up with fairly solid structures. Unfortunately, the big boat classes have their hands tied in this area.

Fun? This is the most fun edition I’ve had. In 2013, it was very complicated with a race comprising a single leg. In 2015, it was a race against time. In this instance, I was ready and we had ideal conditions to boot. Some days it was so pleasant that I said to myself that the race could last another 2,000 miles.