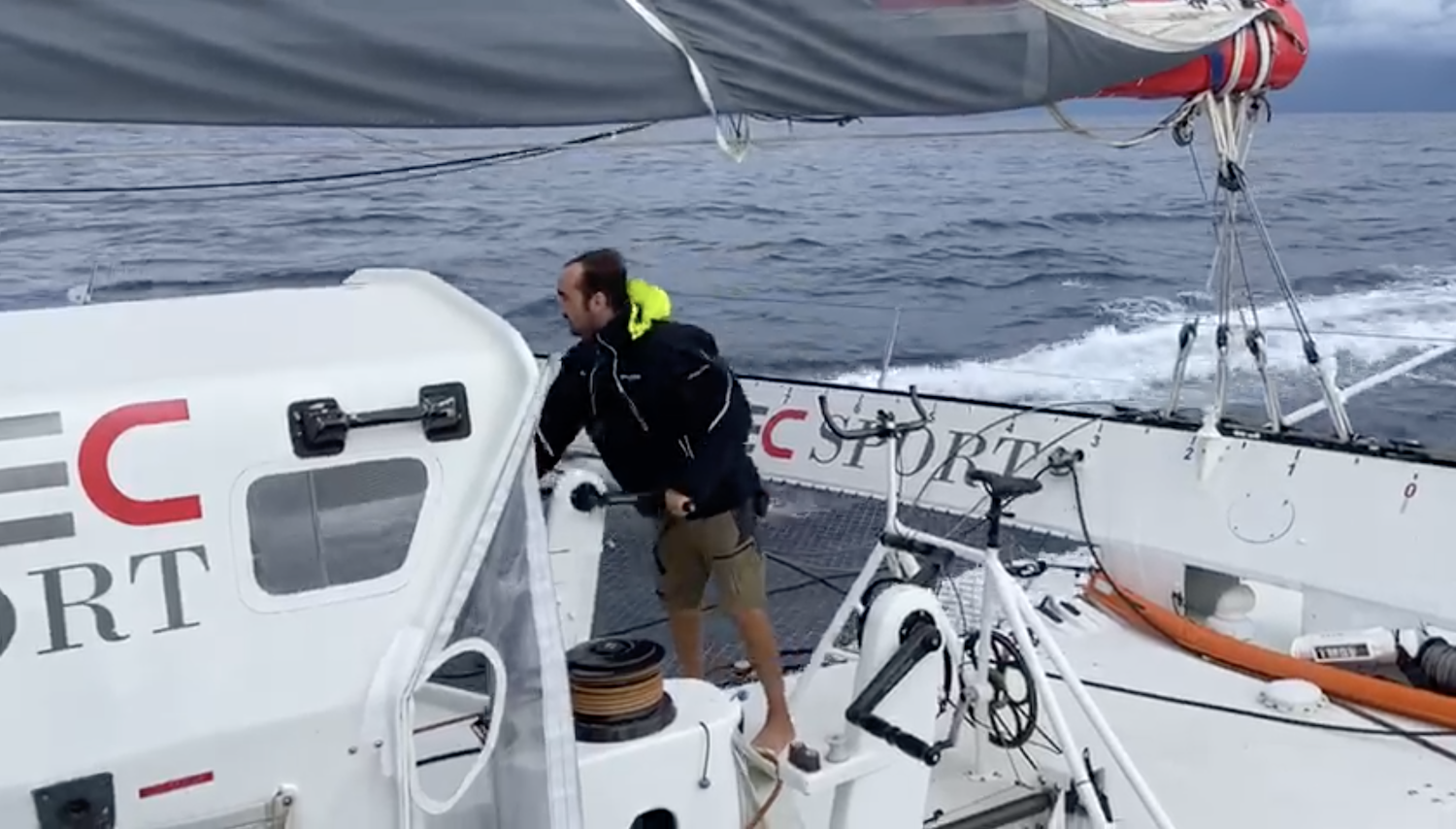 IDEC Sport grinds out the miles - photo from onboard IDEC Sport

The IDEC Sport maxi trimaran has been showing real efficiency over the past two days, as she passes through the heart of the Indian Ocean, continuing to accelerate since passing through the Sunda Strait between Java and Sumatra on Wednesday, allowing the crew to increase their lead over the record time for the Tea Route.

With a lead of 620 miles at the start of the seventh day of racing, Francis Joyon, Christophe Houdet, Bertand Delesne, Antoine Blouet and Corentin Joyon have not finished roaring across the ocean.

Their efficient tack should last another 24 hours with speeds reaching 38 knots as they surf the waves, which means the lead should grow even bigger.

The first major difficulties are expected this weekend with some small cyclonic areas that they will have to get around in the southern latitudes, where they will encounter icy conditions, strong winds and heavy seas.

At the start of this seventh day of racing, IDEC Sport has clocked up a good lead and has been faster than expected when they studied the charts.

“We dared not even hope of passing through the Sunda Strait in less than four days,” explained Christophe Houdet, who has recovered from the food poisoning that upset his first few days sailing amongst the wild islands of the Sea of China.

“It is true that we haven’t sailed many more miles than necessary,” Joyon added. “We had to gybe a lot to get to the Sunda Strait, but we remained more or less on the direct route.”

Having sailed more than 3200 miles averaging 22 knots, IDEC Sport has only sailed around 350 miles more than the Great Circle Route. On the way out she sailed across the Indian Ocean, we saw that Joyon and his crew sailed an extra 1500 miles close to the coast of Australia.

“We’re sailing close to the wind with full mainsail and J1,” Joyon explained. “Our goal is more speed rather than bearing. In the coming hours, we are going to have to dive further south.

“Our current high speeds on seas that have varied a lot from smooth to chaotic, means we have to look at some tactical choices to get around the powerful small areas of low pressure which are developing to the East of Madagascar.”

The t-shirts and shorts they are wearing today will be replaced by fleeces and wet weather gear. “We should be able to maintain these speeds and continue to make good headway over the next 700 miles,” Joyon said. “But the gateway to the Cape of Good Hope is for us down at around 40°S.

“We need to keep good watch all the time, with our hands on the sheets, as we have to deal with a series of fairly violent squalls. We are not with the decent trade winds we had on the way out. We are surfing along, but it’s more up and down.”

The crew is still enjoying sailing the maxi trimaran. “It’s a huge pleasure. We’re really pleased to be sailing in these waters and in this way,” Christophe Houdet remarked.

“The mist during the record-breaking trip to Ho Chi Minh City meant we missed out on the wonders of the China Sea, which we have been able to discover this week.

“Tropical islands with incredible colours and huge unspoilt beaches – a paradise. Discovering these places on a boat that transports you at high speed is a privilege and we are savouring every second. I have just taken the helm. IDEC port has accelerated easily to 38 knots… It’s amazing!”