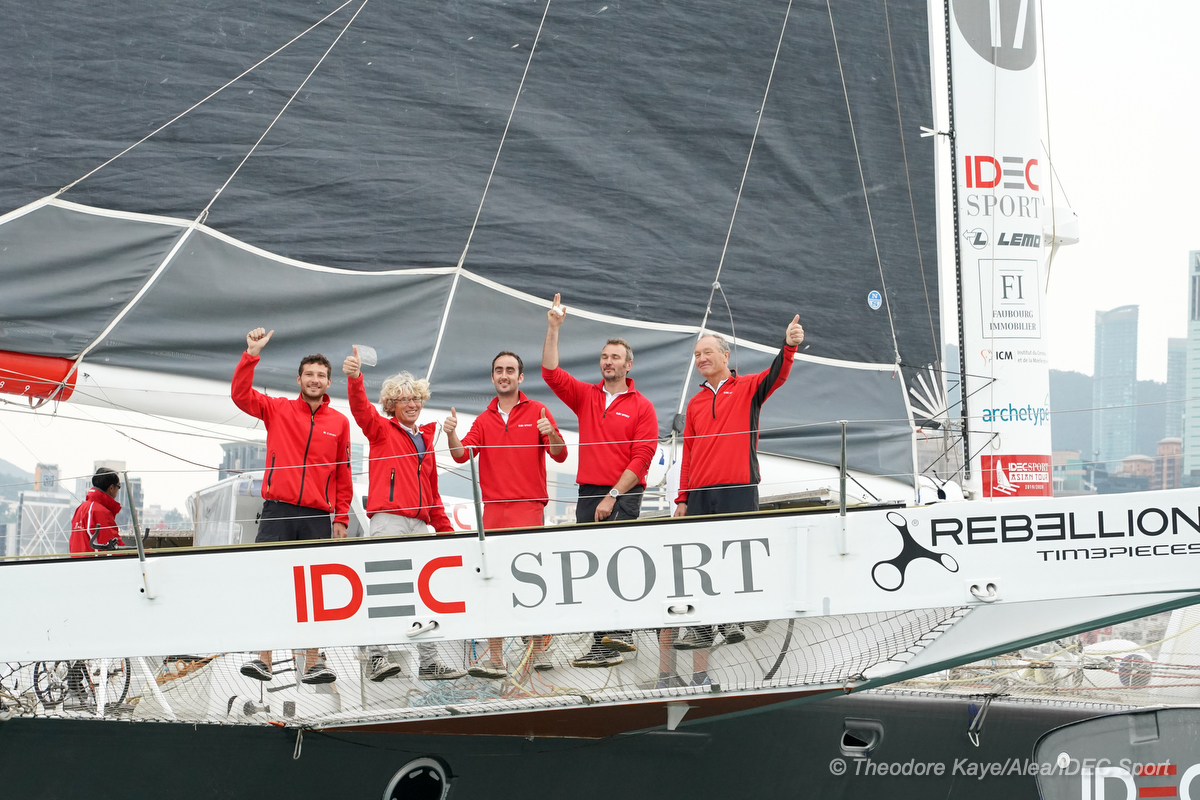 The IDEC SPORT maxi trimaran is back racing, with Francis Joyon and crew leaving Hong Kong this morning at 08:00:47 hours UTC on their way to London in the framework of another record attempt: the Tea Route.

The reference time has been held since 2018 by the Italian, Giovanni Soldini and the crew of the Maserati trimaran, who completed the voyage in 36 days, 2 hours and 37 minutes. To beat the record, Joyon and his crew have to finish in London by 11:36:58 on Sunday 23 February.

The fourth Act of the IDEC SPORT ASIAN TOUR, the Tea Route is without doubt the longest and hardest of the races. A voyage of around 17,500 miles lies ahead of the IDEC SPORT red maxi-trimaran, which won the last Route du Rhum when sailed solo and is still holder of the Jules Verne Trophy for the crewed round the world record.

Francis Joyon never likes to hang around on stand-by waiting for the ideal weather opportunity. With countless records under his belt, he has often proved that his intuition was enough to achieve his goal.

After returning to China by plane last week, and following on from some PR operations with the Chinese in Shenzhen and Hong Kong, Joyon and crew of four, Antoine Blouet, Christophe Houdet, Bertrand Delesne and his son, Corentin, decided to cast off on Saturday morning and cross the start line for this new adventure in the IDEC Sport Asian Tour.

The crew will attempt to beat the Tea Route record between Hong Kong and London. The start took place in moderate conditions, with the monsoon generating 15-knot north-easterly winds along the coast of China.

This is a huge voyage that the big clippers completed in several months. Francis and his men will have to complete the voyage in less than 36 days, 2 hours and 37 minutes to add this record to their list of achievements and finish their Asian tour in style.

“The weather opportunity is not that extraordinary, but it suits us,” Joyon said. How many times have we heard him say those words as he sets off to tackle a record that he ends up beating?

Joyon is off to the open seas again on this return voyage back to Europe in record mode with a crew. On the way out, there were three stages in the trip – Mauritius, Ho Chi Minh City and Shenzhen, but this time, he will be doing the trip in one go with the trade winds cooperating on paper, but that may not be the case.

The studies carried out over the past few hours by his weather assistant, Christian Dumard, reveal a number of hurdles. They start with the crossing of the Equator around Singapore, and the passage through the Sunda Strait joining the Sea of China with the Indian Ocean, where there is usually the worrying combination of calms and strong head currents.

The start of the race is likely to be slow according to Joyon and crew, who believe they will reach the south of the Malaysian Peninsula in just over four days.

In the Indian Ocean in December there were powerful north-easterly trade winds, which forced IDEC SPORT to extend the voyage by almost 1500 miles sailing down close to the coast of Australia. But now there are rough seas with a series of low-pressure systems disturbing the steady flow.

The situation changes quickly and Francis with his enthusiastic crew who understand the secrets of the maxi-trimaran, which has won the Route du Rhum three times and holds the Jules Verne record, hope to reach the Cape of Good Hope within the record time set by Giovanni Soldini.

They are going to have to pray to the wind gods that the cyclones off the coast of Mozambique do not upset their plans. Speed and dealing with transitions are going to be key in the Indian Ocean, which should be fascinating intellectually and physically demanding.

Joyon and crew are going to have to watch out for the Agulhas Current at the southern tip of Africa. Combined with the westerly winds, it could force IDEC SPORT to come to a halt, similar to that experienced by Lionel Lemonchois’ maxi-catamaran, Gitana 13 back in 2008, when he successfully completed the record.

There is plenty to keep them busy after that with the south and north Atlantic, where in both cases they will have to get around huge high-pressure systems.

“Rounding Saint Helena by the north and east looks like being the best solution for the moment,” explained Christian Dumard.

“This means sailing along the coast of Namibia.” Then they face the Doldrums, Azores, the Bay of Biscay, the English Channel and the Thames Estuary… so many episodes to come in the great adventure that lies ahead for Francis and his men.