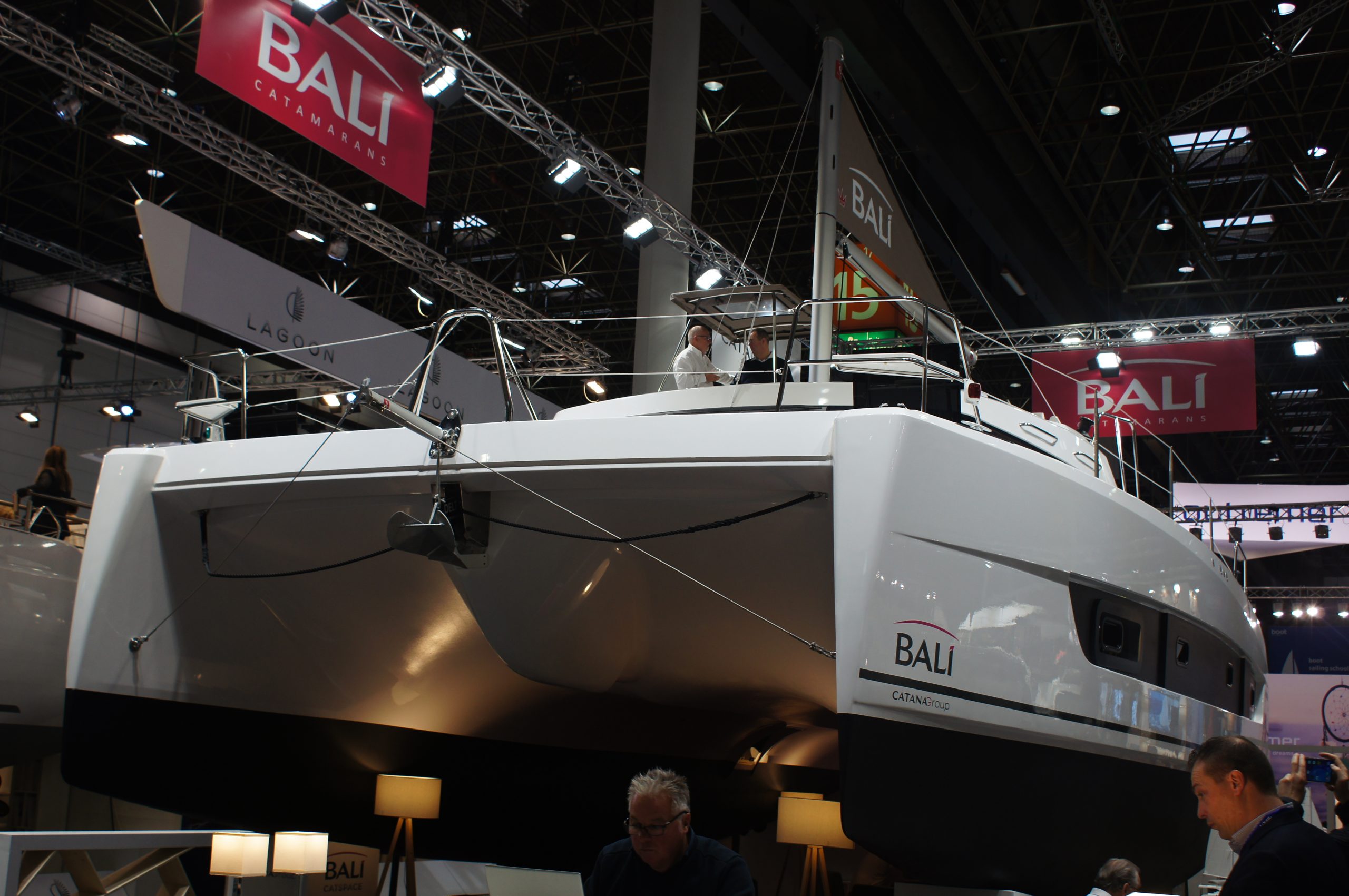 The first few days of the world's largest boat show, Boot Dusseldorf, is the time when yacht builders hold media launches of the new builds they are releasing for the coming year. This year has seen, so far, the world premieres of the Dragonfly 40 trimaran, the Bavaria C42, the Nautor Swan 58, the Discovery 65, the Dufour 530 and the Bali Catspace.

With a week of the fair still to go there are other launches still lined up to go.

Cruising Helmsman editor Phillip Ross is attending the boat show and filed this report on some of the new launches.

First up was the Swan 58, which will take the current line-up of Swan yachts to ten: two Maxi Swan designs and three Club Swan designs sit on either side of the five standard Swan yacht designs.

The Club Swan is a growing idea with Nautor, seeing these one designs travelling around the northern hemisphere in various regattas. The two maxi designs are virtually bespoke builds to suit the cruising clientele at the top end of the market.

The five standard Swans hit the long-standing market of Swan yachts: sailors who want a well-built and designed yacht to take them anywhere in the world in comfort.

The new 58 launch is a return for Swan into this size market. The two designs on either side, the 40 and the 60, have sold well with the 48 having sold 33 so far, but with yacht design being able to include more space in a smaller length sees the 58 replace the 60.

Respected designer German Frers was on hand at the launch and talked about the brief Swan wished for this revamped design. “It involved two years of intense work,” he said, “many discussions and many arguments!”

But now they have a yacht that still rates well in both ORC and IRC for those owners who still like to compete when not cruising, but also has 1150 litres of fuel in six tanks within the hull to ensure long cruises to anywhere.

Frers noted that he thought this was his most beautiful design ever!

On the other side of the scale the Catana Catamaran group launched its 40 foot Catspace design on the first day as well. Due to clever design always expected from this group, there are four berth cabins in this tight package with all four beds at the same size. Often in catamarans the forward berths are quite small compared to the aft berths, but not with this Bali Catspace.

Hull depth is deep on the two hulls to allow for the fuller forward sections and the forward bridge deck is fully glassed in to add to the space in the lateral berth forward cabins. The other point of difference with the Bali Catspace, compared to others in the same class, is the addition of a flybridge – the first for a 40 footer.

The launch of Dufour's 530 held a lot more than just releasing a new boat on the market for this company. The 530 is the first release of a Dufour fully formed by the new owners of Fountaine Pajot Catamarans. The full team was on hand at this launch including the designer Umberto Felci.

The 530 represents the  vision the new owners have for the range of monohulls. Romain Motteau, FP's deputy CEO stated they were “aiming for the premium market with all the quality but still a production boat, still a performance cruiser as that is in the Dufour DNA.”

Agents in Australia, Performance Cruising Yachts were on hand to state they already had a buyer and had secured the seventh hull being built.

Later this year Dufour will release a new 61 footer which will finish three new yachts under the Foutaine Pajot leadership. Certainly a marque to watch.

Watch out for more news from Boot in the next newsletter.