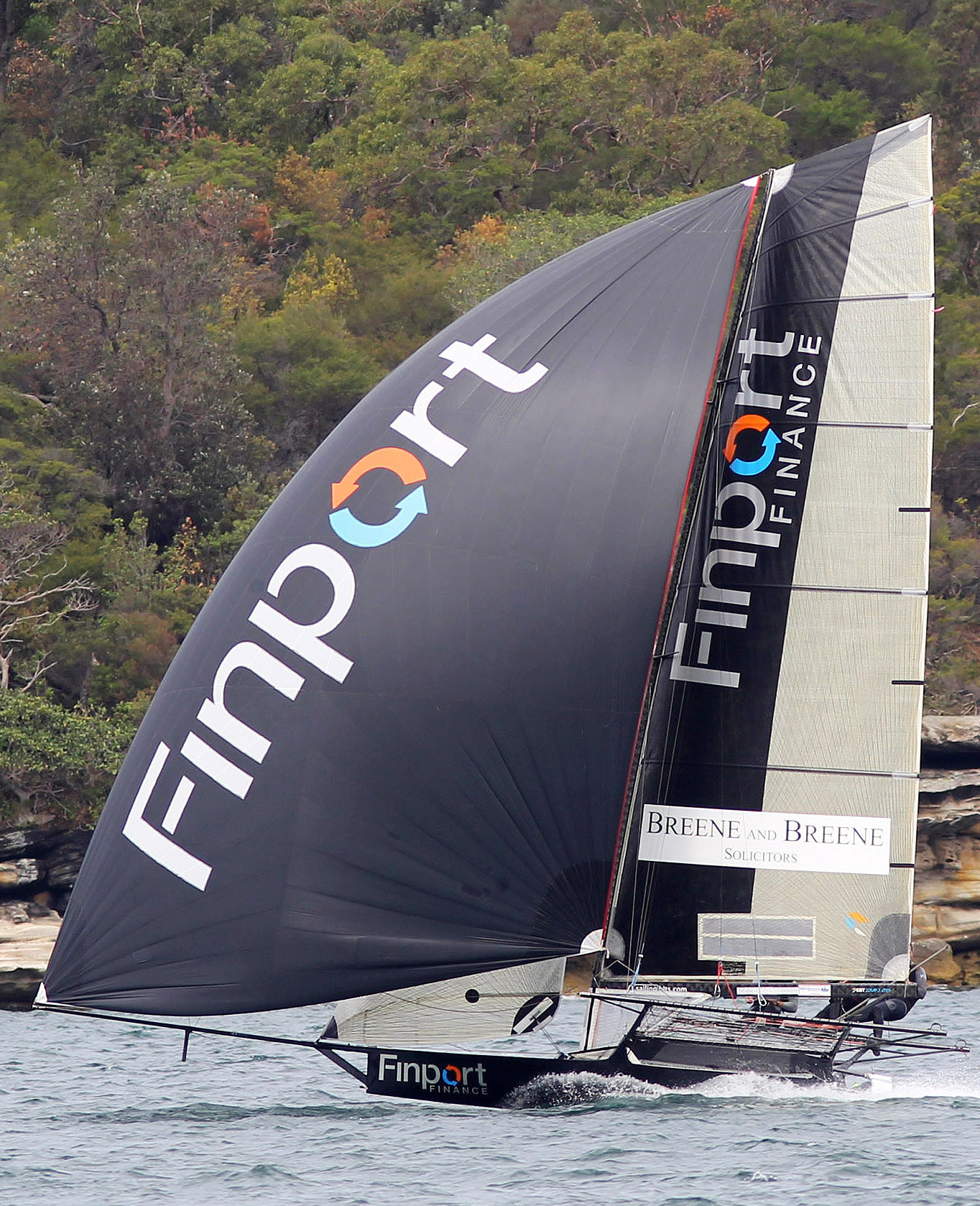 19/01/2020
Sunday, 19 January, 2020
Sydney Harbour
The Finport Finance team of Keagan York, Matt Stenta and David Ewings totally dominated the racing in a 8-12 knots SSE wind to lead the fleet after the two-race opening day of the Australian 18ft Skiff Championship on Sydney Harbour today.
York and his team won the start with a risky port hand start at the pin end of the line in Race 1 and were rarely challenged as they led at every mark of the three-lap windward-return course set in Rose Bay.
Finport Finance increased her led at every mark before crossing the finish line 2m27s ahead of Tech2 (Jack Macartney, Charlie Wyatt, Trent Barnabas), with Shaw & Partners Financial Services (James Dorron, Harry Bethwaite, Tim Westwood) a further 25s back in third place.
Brett Van Munster's appliancesonline.com.au was near the leaders throughout the race to finish in fourth place, ahead of Noakesailing (Sean Langman), R Marine Pittwater (Marcus Ashley-Jones) and the NSW Champion Winning Group, sailed by Seve Jarvin.
It was an outstanding performance by the winner and onlookers were left to wonder could the Finport Finance team repeat the effort in the latter race.
Team tactics changed for the start of Race 2 as York elected to start at the windward end of the line.  Despite the different tactics, the result was the same as Finport Finance led appliancesonline.com.au at the windward mark.
Once again, Finport Finance led at every rounding mark andbut had to survive a very strong challenge from the Rag & Famish Hotel team (Bryce Edwards, Rory Cox, Jacob Broom) to win Race 2 by a mere 4s from 'The Rag'.
Appliancesonline.com.au continued her good performance throughout the day's racing to come home a further 37s back in third place.
The Oak Double Bay-4 Pines (Aron Everett) was just 2s further back in fourth place, ahead of Tech2, Noakesailing and Winning Group.
Progress points after the two races are: Finport Finance on 2, Tech2 and appliancesonline.com.au equal on 7, Rag & Famish Hotel on 10, Noakesailing on 11 and Winning Group on 14.
While a few of the top teams in the fleet were not at their best today, there was a marked improvement in the performances by Rag & Famish Hotel and R Marine Pittwater.
The results have now set a challenge for the Winning Group, Shaw & Partners Financial Services and Smeg teams over the following seven races of the championship.
Today's Result Sheets and images from the racing are attached
There is no club racing next Sunday as the fleet will contest the Lord Mayor's Cup as part of the Australia Day Regatta.  There will be no ferry to follow the race.
It will be back to normal on Sunday, 2 February when Australian 18 Footers League club racing resumes with Races 3 & 4 of the Australian Championship being contested.
Spectators can see all the teams while they are rigging, then follow the racing on board the club's spectator ferry, which leaves Double Bay Wharf, alongside the rigging area, at 2pm.
Book online through the club's website www.18footers.com
AeroMedia Live Broadcast team will be out on Sydney Harbour on 2 February to capture all the action.  For those who can't make it onto the water, live streaming is available at www.18footers.com and clicking on the '18 Footers TV' link.
Also follow all the club's racing throughout the entire 2019-2020 Racing Season:
Club Website             www.18footers.com
Frank Quealey
Australian 18 Footers League