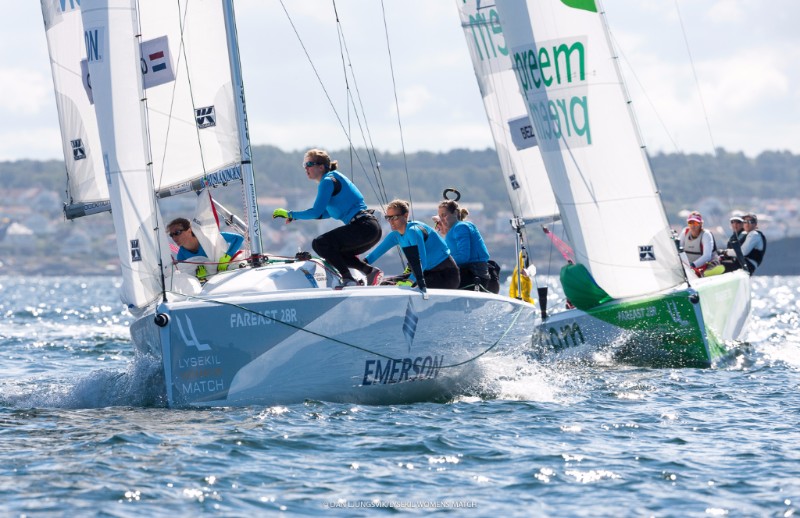 “Now we appreciate getting a little rest before the quarters,” says Palludan, who, thanks to her top spot, can choose her quarter-final opponent.

Alexa Bezel, SUI, was the only skipper to beat Palludan in the round-robin, by taking the start and leading all the way to the finish of their match. The Danes came up close at the bottom mark, but touched the Swiss boat with their gennaker to get penalized. “After that we felt a little bit safer,” says Bezel.

“We lost too much distance to be able to do something,” Palludan admits.

In Tour de France à la voile earlier this summer, Pauline Courtois crashed with her boat, and a crewmember was so hurt that she couldn’t sail in Lysekil. However, a partly new team doesn’t seem to bother the French skipper, finishing the round-robin in second with eight wins.

“Well, I have to admit we’re a little bit surprised, but I know we can handle gennaker sailing. We’ve raced a lot in J/80s and in First 7.5s,” she explains, looking forward to continue racing in the event. “We like the new boats and the conditions here in Lysekil, so we’re aiming high.”

Local hope Caroline Sylvan of the Royal Gothenburg Yacht Club and the Dutch Match Racing Team’s Renée Groeneveld both finished the round-robin with seven wins and three losses each. Thanks to winning their match with Sylvan, the Dutch skipper places third.

“It wasn’t a bad day for us, but we made some mistakes in the starts. Generally we had good boat handling, but sometimes we made it a little bit too hard for ourselves,” she says. “Today we’ve learnt a lot. Because of the shifty conditions we had to change the trim all the time. Another important task was to look out over the course for pressure.”

Palludan, Courtois, Groeneveld and Sylvan are now qualified straight into the quarter-finals, while the remaining seven crews have to continue fighting for the other four spots, in a repechage round-robin. Not very expected is to find World #1 and Lysekil defending champion Anna Östling, SWE, among the latter, but she’s not too upset about it.

“It is what it is. At least we get another six matches to learn more and get even better in these new boats. That’s not a disadvantage,” she says.

Event organizers Sailnet and Lysekils Yacht Club Gullmar will conclude the Repechage Round Robin stage of Lysekil Women’s Match, the 2nd event on the 2017 WIM Series, Friday morning. Quarter-finals are to be raced Friday afternoon, with semis and final to follow Saturday.