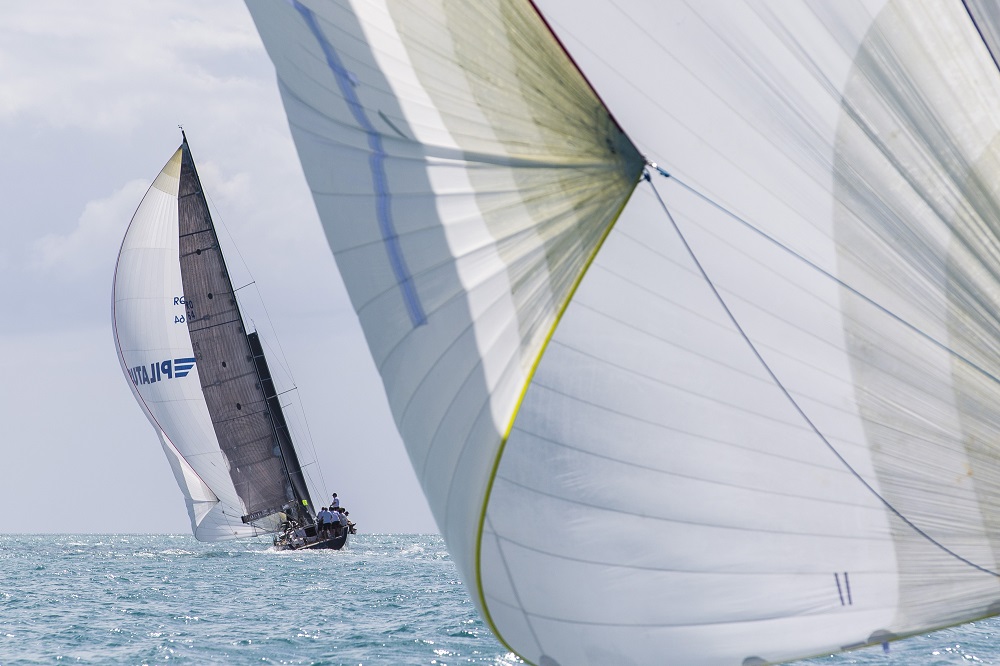 Day 1 at Airlie Beach Race Week Festival of Sailing hosted by Whitsunday Sailing Club got off to a fabulous start – lots of sun and a light breeze for entrants to ease into the competition.

Sailing in light airs, the entire fleet contested the Double Cones course, with the IRC Passage boats away first, followed by Multihull Racing and Performance divisions, with the rest following suit at five minute intervals, the Trailer Yachts brigade last away.

“What a beautiful day,” Davenport said on coming ashore. “We only had to put in two tacks upwind because there was a lot of easterly in the breeze. Perfect for us, because the boat is not a good upwind tacker. We had Tyee and Paxos close by for the entire race, so it was enjoyable.

“We’ll probably be punished by the handicapper now, but it doesn’t matter – we always have a good time here and meet great people. It’s fun and relaxed. It’s our third Airlie Beach Race Week in a row. The boat winters on the east coast and the crew just flies in from Perth and sails it,” he ended.

According to Teri Dodds, a crew member aboard fourth placed Poco Loco (Cam Rae, Vic): Vivace led around the entire course. They went so close to the Cones and we went wide – she creamed us. “Despite that, it was a beautiful day’s sail,” the Geelong yachtswoman said.

At the back end of Performance 2 are Roger Jepsen and crew aboard his new Whereswal II a Fareast 28 that replaces the yacht he sailed here last year.

”It’s a new boat sailed by old bodies,” declared the Victorian. “We are all north of 60 – some nudging 70,” Jepsen said.

“Two of us towed the boat up from Melbourne to Airlie Beach in three days. We were pretty tired when we arrived, but a few beers and the sunshine did wonders,” he said laughing.

Peter Harrison and his crew may have been beaten to the punch today – twice – by fellow Whitsunday Sailing Club members. But he and his aptly named ‘Awesome’ crew had an awesome time anyway.

“We didn’t win, but we finished third on a magic day of sailing,” Harrison said. “Typical Whitsunday weather – that’s why we race at this event every year.”

All starts were away on time in a light north-easterly breeze with no incidents reported. And how good was it to see the many locals back on the water in the aftermath of Cyclone Debbie, mixing it with their rivals from other Queensland clubs and interstate?

Airlie Beach Race Week Festival of Sailing closed with 102 entries across nine classes and division. For full results go to: