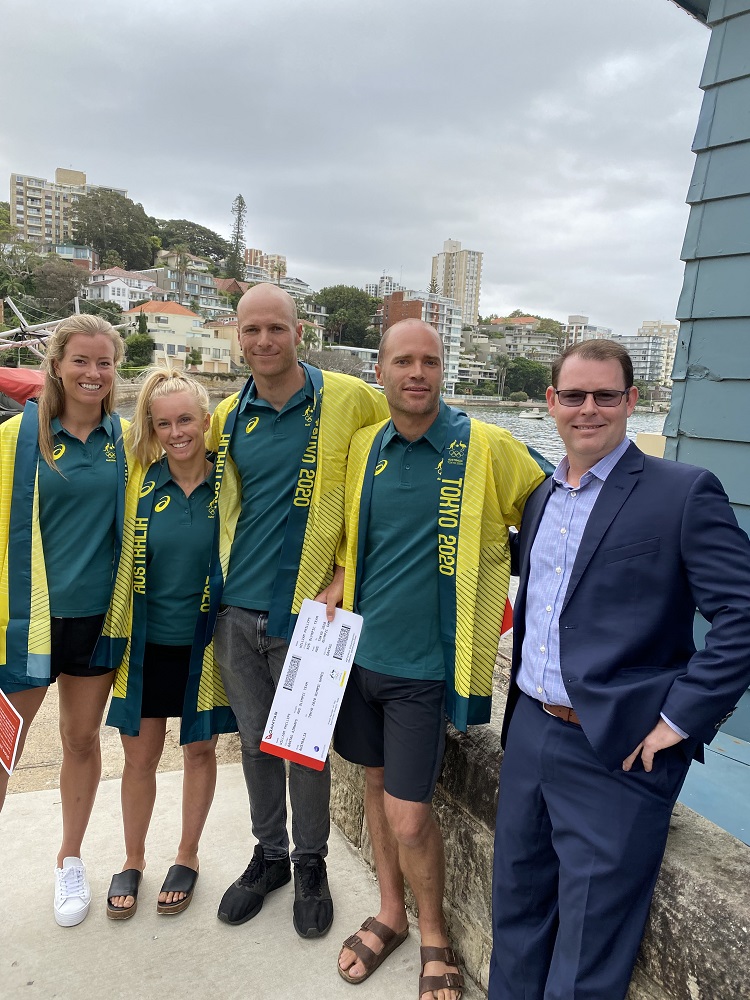 At Double Bay Sailing Club this morning, Ian Chesterton, Chef de Mission for the Australian Olympic Team, announced four more sailing athletes are bound for the 2020 Tokyo Olympic Games, to be held from 24 July to 9 August.

Tess Lloyd and Jaime Ryan have been selected in the 49erFX skiff and brothers Will and Sam Phillips in the 49er skiff. The four will join Matt Wearn (Laser) and Mat Belcher/Will Ryan (Men’s 470), who were selected a few weeks back. More announcements are expected in coming weeks.

It’s been a long hard road for Lloyd. At 16 years of age in January 2012, she was involved in a serious sailing accident with a windsurfer while competing as a skipper in the 29er class.

Ten months after being in an induced coma to treat a serious brain surgery, Lloyd, turned 17, was back sailing. Her dream, she said, was to do the Olympics. “I am aiming for the Rio Games.”

Fast forward and Lloyd did not make it to Rio in 2016. Despite being the top placed Australian skipper in the class, the selection committee felt she and her then crew were not ready. It caused Lloyd huge disappointment, but did not put her off her goal.

No such qualms for this time. Jaime Ryan, who represented in the 470 double-handed dinghy at the Rio Games (her brother Will, an Olympic silver medallist multiple world champion is headed to his second Games in the Men’s 470), joined the Victorian sailor and they have made big strides in the 49erFX in recent times.

“It is a big relief,” admitted a Lloyd, a very determined 24 year-old from Victoria. “It’s been a long journey and a big commitment. Now we want to show the world what we can do.”

The two know they have big obstacles to overcome, but that is nothing new for either. The world top three ranked pairings have been on their games for a while now. World Ranked No. 1, Martine Grael/Kahena Kunze (BRA) won gold in Rio; Alexandra Maloney/Molly Meech (NZL) Rio silver medallists and Annemiek Bekkering/Annette Duetz (NED), are the ones to beat.

“We know who we are sailing against, but Jaimie and I are at a stage where we have bonded. And you have to go backwards to go forwards. We are still training and racing and know we have to step it up a level at the Olympics,” Lloyd said.

“We have a lot of supporters, especially back in Melbourne, and we just want to do everyone proud,” she said.

The biggest 49er obstacles for the Victorian Phillips brothers are the Kiwis; Peter Burling and Blair Tuke. Just saying their names puts fear into any sailor worth his salt. ‘The Kiwis’ won Silver in London (Australians Nathan Outteridge/Iain Jensen won Gold) and Gold in Rio, where they beat silver medallists Outteridge/Jensen by a massive 43 points.

Taking a break, the Kiwis returned to the race track with a vengeance this year. it did not take them long to resume their place at the top of the leaderboards. As the sailing saying goes, they are ‘on fire.’ Rio Games silver medallists, Erik Heil/Thomas Ploessel are also in form.

“It’s been a long battle to get here,” Will Phillips admitted after their close competition with another pair of brothers, David and Lachy Gilmour, and other Australian 49er teams. The two sets of brothers have been on a bit of roller coaster ride, both have had their share of great results and some not so good ones. The Phillips’ have been running hot in recent times, stepping it up a notch.

“It’s been a cool and wonderful ride,” Will said. “It’s been really important to have the others around us and working in a group environment than to be on our own. The team environment has been a huge benefit for us.

“We feel a little bit of a relief too; we’ve had a mindset all along that that’s (Olympics) what we’ve been aiming at. We took a bit of a break to work and do other things, but Sam and I came back together. We got on well, which you have to, to succeed.”

Describing the sailing venue at Enoshima in Japan, where all the Australians in the team will spend time competing and training ahead of the Games, Will said, “It’s a humid environment at that time of year and you’re sailing on the Pacific Ocean. It’s unprotected, so it can be challenging – the waves and a lot of swell.

“For the skiffs it’s even more challenging,” he says in reference to their breakability factor compared to the heavier dinghies. “Just one more factor that will determine the outcome,” he conceded.

And the Coronavirus is another factor. Whether the Games will even go ahead is an unknown at this stage.

“The Coronavirus issue is a serious one. Efforts and energies are going into controlling it. It’s a moveable feast, but at this time, the Games will go ahead,” said Ian Chesterton, as news came this morning that the virus was spreading outside of China.

“The virus has been disruptive, but athletes across all sports will keep preparing. The Games are happening – that is the message at the moment,” he ended.