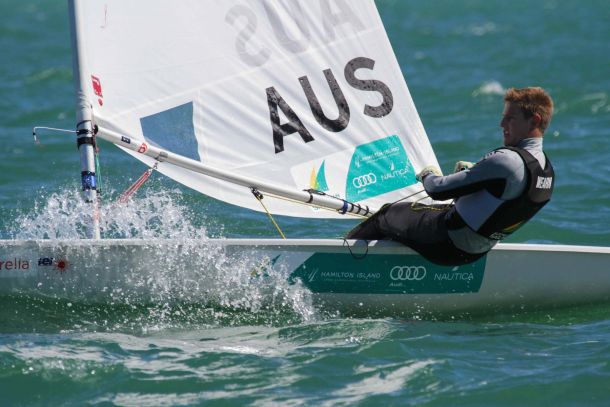 It was again challenging racing at the ISAF Sailing World Cup with wind back in the east at 13-15 knots all day. But day four (Thursday, 29 Jan local time, i.e. Friday, 30 Jan AEDT) saw little change in the overall rankings and counting down to Saturday's (Sunday AEDT) top-ten medal races in the Olympic boat classes.

The Paralympic boat classes will finish on Friday, January 30 (Saturday, 31 January AEDT) and things are looking good for Australian Sailing’s Paralympic gold medallists Daniel Fitzgibbon (NSW) and Liesl Tesch (NSW). The pair remains in the lead and has a four-point advantage over their closest rivals Alexandra Rickham and Niki Birrell from Great Britain. Both crews posted a second and first on the penultimate day of Paralympic sailing, which will make for an exciting battle in the last two remaining races with the Australian’s aiming to bring it home:

“Today the wind was a little lighter and more unstable than previous days,” skipper Daniel Fitzgibbon summed up the day. “In the first race we were able to extend our lead over the second placed Italian boat and finish second. The final race of the day was a good one for us where we led from start to finish. There are two final races tomorrow and we hold a four point lead over the GBR crew and we will try to bring it home.”

Tasmanian Matt Bugg finished the day off with a race win as well, which moved him into fifth place in the 2.4mR.

In the Olympic classes, Men’s 470 World Champions Mat Belcher (QLD) and Will Ryan (QLD) continue to sit in second with nine points behind Great Britain’s Luke Patience and Elliot Willis. The pair is still in touch and has two more races ahead of the final medal races to gain on points.

Olympic gold medallist Iain Jensen (NSW) sailing in Miami with up and coming skipper Joel Turner (QLD) held onto their second place in the 49er skiff. After an impressive performance of this new pairing, with 19-year old Turner filling in for Nathan Outteridge at this event, they are only one point behind the leading crew from Austria. (See Thursday’s Media Release with more information on Turner/Jensen http://www.australiansailing.org/aus-sailings-youngsters-make-waves-at-sailing-world-cup-miami/ )

“The Miami Sailing World Cup is living up to my expectations of being a challenging venue with world class competition”, Jake Lilley said about racing in Miami. “The first three days of offshore north-westerly winds produced unpredictable shifty conditions. One minute you’re looking like a hero and the next you find yourself in the bottom of the heap. Fortunately so far I have done well picking the good shifts and sailing with speed in these conditions. It looks like we might have more of a classic Miami sea breeze condition over next couple days and I’m looking forward to the challenge of lighter winds.”

With one more day of racing before the double-points medal race on Saturday. Britain’s Giles Scott, who has not lost an event over the past 18-months, is 10 points ahead of Jake Lilley, who in turn is eight points ahead of Ioannis Mitakis of Greece.

“Today just didn't seem to be my day,” he said after racing. “I couldn't get my head around the shifts. Although I did fight back in both races, which could have been shockers, and managed to score a 12th and a 16th. Not great; and it made me slip down to third overall. But it’s still close at the top with two more races to go before the medal race.”

In the 49erFX both Australian Sailing crews of Tess Lloyd and Caitlin Elks (WA) as well as Olivia Price (NSW) and Eliza Solly are ranked 11th and 12th respectively. They will aim to make the most of tomorrow’s three races to move up into the top ten in order to compete in the medal race. Also fighting for a top-ten spot tomorrow will be Euan McNicol and Lucinda Whitty (NSW) who moved up to 12th in the Nacra17 after posting a race win, a 15th and 3rd in Thursday’s racing.

Racing in Miami continues on Friday local time (Saturday AEDT) when the Olympic class opening series will conclude. The medal race for the top ten will be sailed on Saturday (Sunday AEDT).

Competitors in the Paralympic events have a total of five days of fleet racing and will finish the regatta on Friday, 30 January 2015 (Saturday, 31 January 2015 AEDT).