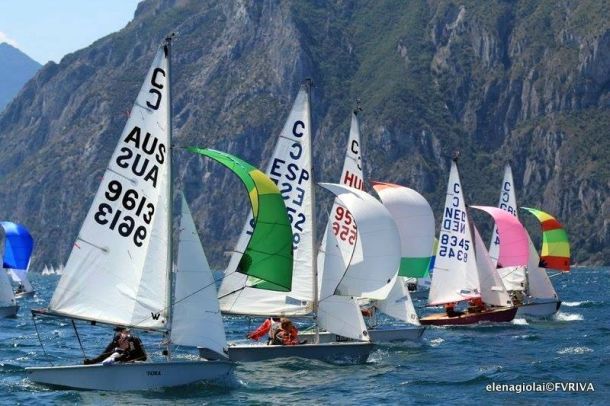 Three straight wins by a British crew on day two of the International Cadet World championships on Italy’s Lake Garda have forced the Tasmanian crew of Sam Abel and Hugo Allison down from first to second overall after six races. However, four Australian crews remain in the top ten of the 58-boat fleet and a fifth crew 13th overall.

Abel and Alison, from Hobart’s Sandy Bay Sailing Club, still sailed exceptionally well, with a 2-6-4 score on day two, but instead of being one point ahead they are now five points behind the GBR crew of Jamie Harris and Bettine Harris.

The weather on Lake Garda has been a very steady 15-18 knots and conditions look good for the remaining six races, two each day planned for Tuesday, Thursday and Friday, with Wednesday a reserve day. Temperatures are around 35º C which means that breezes are likely to be stronger as the week goes on.

All but two of the seven Australian crews fell back slightly on the leader board, the exceptions being Angus Price and Archer Ibbott from Sandy Bay Sailing Club and Dominic Randall and Ella Purnell from Royal Geelong Yacht Club.

Price and Ibbott began the day with a 25th (their first discard) but followed this with a 10th and a second to move up from eighth overall to fifth at the end of day two.

Randall and Purnell recovered from the setbacks on day one to finish fifth in race six overnight. This lifted them three placings to 22nd in overall standings.

In sixth place are Marty Hood and Jack O’Donnell from Port Lincoln Yacht Club who placed 27-11-7. In revised results from day one, Hood and O’Donnell moved from third to second place in race one of the championship following the disqualification of the provisionally second placed Ukrainian crew.

The fourth Australian crew in the top ten are Julian Sasson and Mischa Suda from Sandringham Yacht Club who are 10th overall following placings over 24-3-17 overnight,

Sandy Bay sailors William and Laura Cooper began day two with a 10th place but followed this with two 25th places to drop down from eighth to 13th in overall standings.

In 17th place are Oliver Manton and Benjamin Garner from Royal Geelong Yacht Club who placed 28-30-21 on day two.

Good Morning from Riva. Another three races were sailed yesterday, so we are halfway through the regatta statistics wise after only two days.

The sailing was in much lighter winds which in the past has not been the Australian forte. We have done a lot of work in this area in our Australian training camps and it stood us in good stead. The day belonged to the GBR team, in particular the Harris siblings who won all three races. The Australians also had plenty of boats up in single digits. Particularly Sam Abel and Hugo Allison who withstood the Harris onslaught to score very well and hold up second position overall. Angus Price/ Sam Ibbot and Marty Hood/ Jack O Donnell lie 5th and 6th and Julian Sasson/ Mischa Suda 10th after some good results. Will and Laura Cooper slid a little to 13th but have time on their side and doing very well for such a young crew.

We have a couple of very good crews in the twenties who will look to improve in the second half of the regatta. To the uninitiated even a small boat like a cadet is a vary complex machine. For each day all your standing or fixed rigging need to be set up just right on the day, then there are a myriad of lines to be constantly adjusted to trim the three sails and the boat needs to be steered to match the particular wave pattern, all with just four hands. On top of this there are tactical issues dealing with boats around you and strategy to be considered in regard to wind shifts and fleet placement.

Whilst we have all the crews in the top half of the fleet, we will work hard to find the right triggers out of all the above to improve all our fleet. While some may not feature in this regatta placings, we all look to do our best and the process of finding a way to “get back into the regatta” will stand them in good stead in future sailing and life in general.