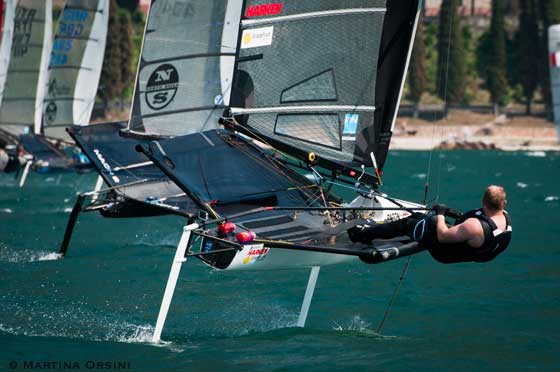 The Foiling Week is the first and only series of global events dedicated to the fast foiling boats, their sailors, designers and builders. After two successful editions in 2014 and 2015 held at Fraglia Vela Malcesine on Lake Garda in Italy, in 2016 the Foiling Week will also hold an additional event in the USA.

In its third year Foiling Week Association has decided to follow up on the numerous overseas requests to hold a Foiling Week event and as a result, Sail Newport, in Newport R.I. will co-organize the second act of the Foiling Week Series 2016.

The first event in Malcesine on Lake Garda from July 7th to 10th is the ‘classic’ Foiling Week organized by Foiling Week Association together with Fraglia Vela Malcesine. The second event of Foiling Weektm in 2016 takes place in Newport, Rhode Island, USA from September 8th to 11th.

The program will include the Forums to be held in the morning and the on water activities mainly in the afternoon with a Foiling Expo and Foiling Boat Trials available throughout the week. There will be races for the one-design classes, long distance races along with prototypes, a speed contest and a permanent training area for those not racing at that time.

At Malcesine the Moth class will have an excellent opportunity to test the waters of the venue that will host the 2017 International Moth World Championship.

The Flying Phantoms will hold a regatta as part of the 2016 Flying Phantom Series and the GC32 foiling catamarans return for a leg of the 2016 GC32 Racing Tour. The Waszp, S9, kitefoils and prototypes will also race over two race courses during Foiling Week in Lake Garda.

Nicolas Felix from Phantom International: “For the second year in a row, the Flying Phantom Series will join the Foiling Week event in early July. Lake Garda is one of the favourite sailing venues for European sailors and a perfect place to organize Flying Phantom races. With its unique dedication to foiling boats with new foiling classes this year, The Foiling Week is definitely one of the key events of the season and also a great opportunity to enjoy this fantastic area.”

About their participation at Foiling Week 2016, Christian Scherrer, the GC32 Class Manager, declared: “The GC32 Racing Tour is looking forward to coming to Malcesine on Lake Garda for the second event in our season. Having the GC32 Malcesine Cup as part of The Foiling Week gives this event a very special status. The Fraglia Vela Malcesine will become the hot spot for the foiling community for the first week of July. We are counting on a great event and interesting meetings ashore.”

The President of Fraglia Vela Malcesine, Gianni Testa, says: “We’re enthusiastic to be part of such a successful project that this year will also expand to Newport, USA. The Foiling Week has gained a very special status within the foiling community and in the 2016 we welcome as new member of our foiling family the GC32 catamarans with their Racing Tour. Lake Garda is one of the best spot for sailing and we’re happy to organize for the third year in a row this exciting event together with the The Foiling Week Association. We look forward to the first week of July and to lots of exciting days with foiling boats!”

Newport will hold races including the Moth North-American Championship and the A Class Catamaran Pre-Nationals. The C Class multihulls and a lot of prototypes will fly during the week from 8th to 11th September.

Brad Read, who heads Sail Newport, which masterminded the last Volvo Ocean Race stopover, declared “We are very excited to bring this international event to Newport. High-performance sailing has a home here and has for generations. Sail Newport Sailing Centre is the home of one of the nations largest foiling Moth classes. Narragansett Bay is popular for kite boarders which are now equipped with lifting foils as well as the foiling A Class catamaran fleet in Bristol.
Boats that literally fly out of the water are not a new development. The technology is becoming more ‘mainstream’. We look forward to the sharing of technology and showcasing ideas among sailors from around the world in Newport Rhode Island in September.”

In the past editions a lot of flying boats including foiling mono hulls, multi hulls, kite-surf boards, windsurfers, and a wide variety of prototypes have been sailed by sailors including professionals such as Sebastian Col, Francois Gabart, Josh McKnight, Stefano Rizzi, to name just a few.

In both venues the Forums will be scheduled during the week with presentations in the morning and a round table with Q and A’s to close the sessions on these days.

Forum Workshops will be scheduled during the mornings and at the end of racing in the afternoons from Thursday 7th to Saturday 9th July in Malcesine and from Thursday 8th to Saturday 10th in Newport. Special forum sessions are open to those who have innovative ideas and projects to propose.

An Exhibition of foiling crafts and test trials on board some of the boats, provides a rare opportunity to try the ‘third mode of sailing’.

Nominations are now open for Boat Show exhibitors and sponsors who would like to support the events.