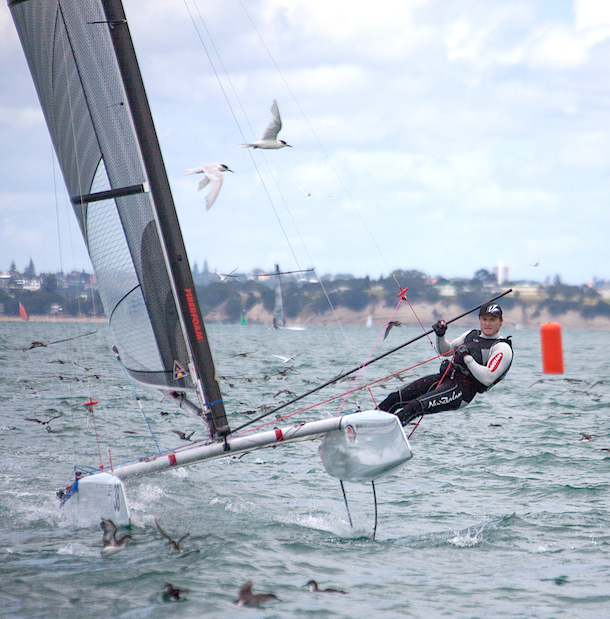 After nine years on “floaters” the Extreme Sailing Series will race foiling GC32s next year; the A Class is looking to split their fleet into foilers and floaters; Andrew McDougall is putting the finishing touches on a new, cheaper one-design foiling mono called a Waszp; and even World Sailing (formerly ISAF) has moved with astonishing speed to confirm that the Nacra 17 will be on foils at the 2020 Olympics.

Solo sailors in the IMOCA class are racing semi-foilers across oceans and even the humble cruising catamaran is likely to feature these devices in the not too distant future.

Perhaps the most important and exciting consequence of this trend is that for the very first time, sailing has a weapon in its armoury that is not only stopping the loss of teenagers from the sport – it is actually attracting new sailors of that vital age.

The Europeans are already teaching the next generation of sailors. Austrian double Olympic gold medallists Roman Hagara and Hans-Pieter Steinacher run a special foiling class at Foiling Week and there are two sailing schools on Lake Garda in Italy that are teaching foiling on Australian-designed Mach 2 Moths. Sailors from as far away as Great Britain are spending their holidays learning the set-up and sailing skills required.

Australia has some of the best foiling sailors – and more importantly foiling thinkers – in the world. Leading the charge is 'A Mac' – Andrew McDougall, the man who effectively started it all with his foiling Moths. Then there are the America's Cup sailors: Glenn Ashby, Jimmy Spithill, Tom Slingsby and Nathan Outteridge are all intimately involved with the design of the next generation of foiling AC boats. There is very little they don't know about the effects of different design features and the best way to generate controllable lift and forward momentum.

Australia needs a dedicated foiling school where this knowledge could be passed on to the next generation of sailors. With the Nacra going to foils, and the possibility of a Moth derivative as a single-hander at future Olympics, our continued Olympic success depends on being better than other nations. And that's not even counting the sailors who will pursue world domination in the Extremes, the GC32s and future America's Cups.

According to McDougall, foiling is more about set-up than sailing. He says that in normal sailing about 25% of success is attributed to how the boat is rigged, while 75% is down to sailing it well. In foilers, he says, the ratio is about 60% set-up and 40% sailing.

This echoes what Nathan Outteridge told me at the 2010 Moth Worlds on Lake Macquarie (which he won). He said that if the sailors who were crashing constantly sailed his boat, they would foil. And if he sailed their boats, he would crash. So they both agree that any foiling school should have a strong technical program.

Other elements that aid foiling are flat water, a constant wind of 8 to 12 knots and a lack of weed. So that possibly counts Outteridge's home at Wangi Wangi on Lake Macquarie as a possible venue.

Royal Queensland at Manly could be ideal, with its flat water and steady afternoon breezes. But McDougall said his preference would be Port Stephens on the NSW coast. He owns a property there that has a big lawn for rigging…

I ran the idea past Jimmy Spithill and Tom Slingsby and both said they would like to see it happen.

“It (foiling) is the way the sport's going,” said Slingsby. “And we need to stay on top.”

McDougall would obviously like more people foiling as he would sell more boats. But he also warns the consequence of not bringing foiling into the mainstream of sailing.

“We're going to lose a lot of people. They're sailing Moths and foiling kites, all the exciting things, outside the sailing realm. Just going out for fun. If we don't include foiling boats at the Olympics and in other mainstream sailing events, we risk losing these guys permanently.”

Yachting Australia is aware of the opportunities. CEO Matt Carroll responded this way: “We agree that foiling has a strong future and we need to be at the forefront of the opportunity both for Olympic and international competition and as a participation growth tool to attract the youth.”

So what's the next step? There are two possibilities. Either Yachting Australia quickly adds foiling to their pathways program and devises a Tackers-style accredited program that shows progressive clubs how to offer foiling as an option.

The program could feature videos of the top guys like Outteridge and Ashby explaining how to set up the boat and why certain settings are so important for different conditions. Then the instructor would show the class how to put this knowledge into effect on the water.

There would be a large initial outlay in buying the foiling boats, but many clubs have large reserves sitting in their bank accounts. This would be an investment, not a cost, as course fees and new member subs would eventually cover the cost of the boats.

Alternatively, an enterprising sailor raises some capital, buys a few foiling boats and sets up a commercial operation that becomes the best foiling school in the world. It could even be franchised.

Whichever way it goes, someone in Australia needs to act fast. The upside is huge. And the penalty for not acting is very high.