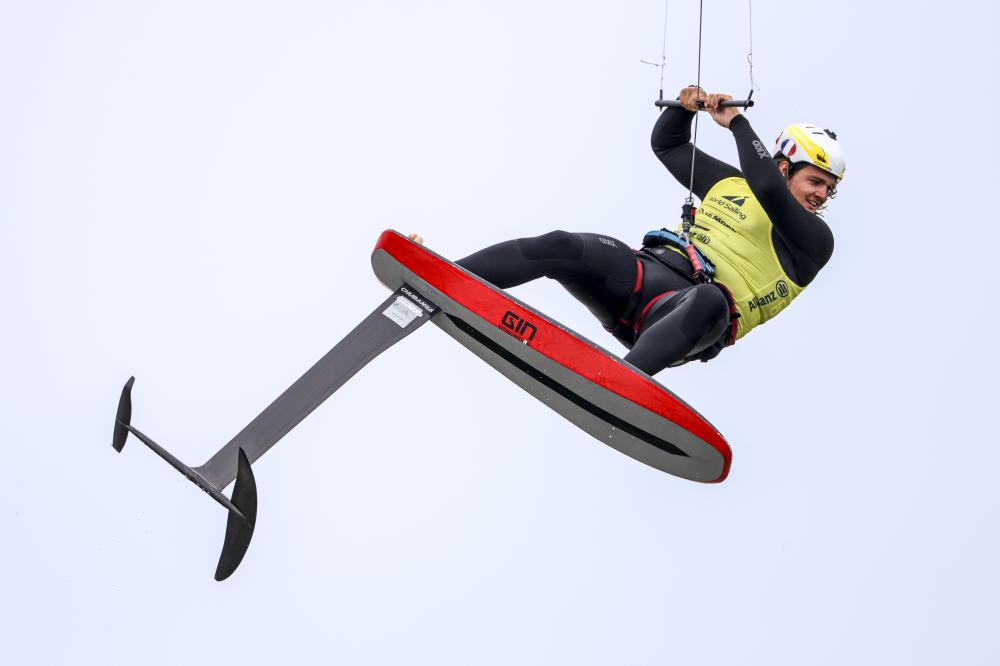 Lelystad, the Netherlands: The boat classes completed their medal races at the Hempel World Cup Series at the Allianz Regatta on Saturday, and on Sunday it was the finale in Lelystad for the four Olympic board classes.

All week Annelous Lammerts (NED) had set the pace in the Formula Kite women’s fleet. For winning qualifying, the Dutch rider earned a place directly in the four-board final along with second qualifier Giselo Pulido (ESP). Meanwhile it was two Israelis – Maya Ashkenazi and Gal Zukerman – who fought their way through from the two semi-finals to take their place alongside Lammerts and Pulido on the start line of the final.

The two Israeli riders pushed Lammerts hard all the way around the course, especially on the high-speed 30-plus knot reach towards the finish line. “I had nothing to lose,” said Zukerman, “so I push, push, push all the way. Annelous had to sail with a bit more safely, so I tried to take my chance.”

Lammerts kept her nerve to win the race and take her first gold medal at a major international regatta. “That was my first ever final, and I know it’s an all-or-nothing scenario, so it’s a change of mindset,” she said. “The qualifying is all about consistency but then in the final you have to get into ‘beast mode’. The others pushed me really hard, but I kept going at 99 per cent all the way round. The trouble was they were going 105 per cent. But I won and I’m super-stoked.”

Despite finishing last in the four-board final, Pulido’s championship point from qualifying in second place meant the Spaniard took the silver medal. Zukerman was second across the line just ahead of her teammate Ashkenazi, so it was Zukerman who took bronze with Ashkenazi in fourth overall.

Benoit Gomez (FRA) powered his way to victory in the first heat of the final, although not without a start line battle with his closest rival, Lorenzo Boschetti (ITA) where their kites came dangerously close to each other. From there the race became more straightforward for the Frenchman. As Gomez crossed the finish line he skyrocketed his board out of the water and celebrated four metres above the surface of the grey Markermeer. Gomez had used the week to experiment with new equipment and made a radical decision to fly a mid-size 15-metre kite in the light airs of the final day.

With all his rivals opting for the full-size 23-metre kite, opting for the mid-range kite was a brave choice, especially considering Gomez is the heaviest rider in the fleet. “I’m 112kg at the moment, trying to get to 117kg but it’s hard for me to reach that weight,” said Gomez. “There are a lot of different riding styles and many different techniques in the fleet, but for me it works to go with the smaller kite. It felt a bit risky, but I had good speed. I’m super happy with that result. The level is going up, up all the time, so a lot more to work on.”

Behind the big Frenchman it was silver and bronze for the two Italians, Boschetti and Riccardo Pianosi respectively.

Maria Belen (PER) had been closing in on her training partner Lilian de Geus (NED) all week and by the end of Saturday had drawn level on points at the top of the leaderboard. Even more crucially, Belen came off better on the tiebreak which meant the Peruvian wore the yellow bib going into the final day. The unique medal series format of the iQFOiL class puts the winner of qualifying straight through to the three-board final. “It is nice to know I have a medal of some colour,” said Belen in the morning as she donned her wetsuit and yellow bib.

Unfortunately, the wind continued to fade throughout the afternoon, and it wasn’t possible to hold the sudden death final. So, gold went to Belen who won from de Geus by the tightest of margins.

“This is my first podium, my first gold medal in a championship outside of South America,” smiled Belen. “I had good success as a junior, but it’s been a long time coming at senior level. It was a good battle all through the week. We finished super close, on the same points. Same number of first places and second places but because I won the last race, I won the tiebreak. It couldn’t have been closer.”

While proud to be representing Peru she also paid tribute to the Dutch squad. “I’m super thankful to the Dutch team because it’s like they have adopted me and I’m able to train here and have all the support. I’m happy to still be able to represent Peru, but it would be impossible without all the help of the Dutch team.”

So it was gold for Belen, silver for de Geus and bronze for Lena Erdil (GER).

The Dutch squad dominated the iQFOiL Men’s podium, with no change on the final day as the wind proved insufficient to complete the medal series. As yellow bib wearer from the previous day, Huig Jan Tak (NED) beat his Dutch teammate Max Castelein who had led for much of the regatta. Joost Vink (NED) had overhauled Louis Giard (FRA) towards the end of the competition, making it a perfect podium for the home team.

“We didn’t have all the major players here but it’s still good to win,” said Tak. “I would love to have had the magic of crossing the finish line today and be able to win on the water, but still, it’s good to win here at home. A Dutch 1-2-3 is beautiful, proud to do it with all our team. We’re going for more successes in the future and more easy wins, because we are a strong team.”

That’s the end of the Hempel World Cup Series at the Allianz Regatta for 2022. Arno van Gerven, director the Dutch Watersports Federation, thanked all the international competitors as well as the hundreds of volunteers who made the event happen in Almere and Lelystad for the first time. “We’re very proud of what’s been achieved with this new event,” he said, “but we know there are many areas to improve, and we look forward to making the event better for 2023.”

For more information about the Hempel World Cup Series at the Allianz Regatta, click here.

By Andy Rice for World Sailing.