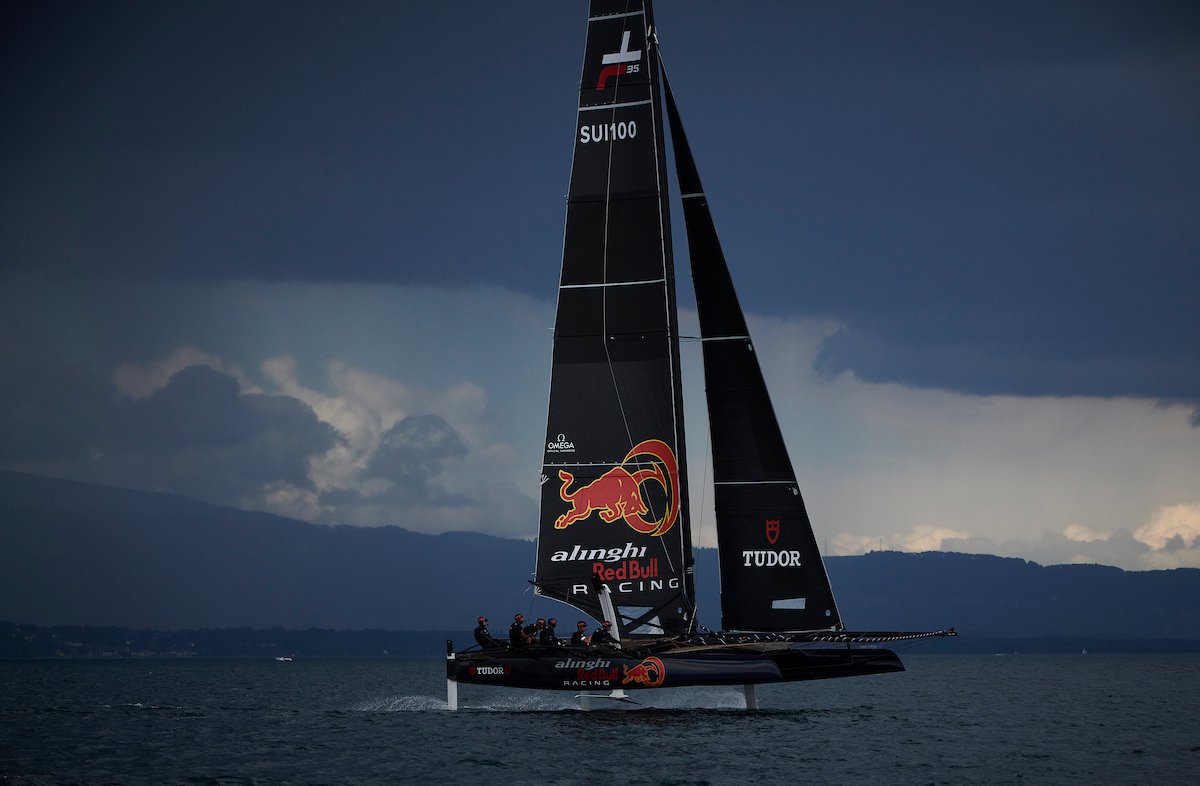 Versoix, Switzerland: Ernesto Bertarelli’s Alinghi Red Bull Racing triumphed at the end of a thrilling final day of the TF35 Mies Grand Prix, which came down to a match racing battle with closest rivals Realteam for Léman hope over the last three races of the series.

Bertarelli’s Swiss America’s Cup challenger team went into the day ahead, tied on points with Realteam for Léman hope, but with the confidence of having won the Genève-Rolle-Genève long-distance race yesterday.

In today’s opening race, it was Jérôme Clerc and his crew on Realteam for Léman hope who led the fleet until the final cross to the finish line. When the dark blue hulls of Alinghi Red Bull Racing skimmed ahead to claim the win, putting Realteam in second and Guy de Picciotto’s ZEN Too in third.

“The racing was very close all weekend. Congratulations to Realteam, Yilliam and Spindrift, who sailed well,” said a beaming Bertarelli on the dockside at the end of three days of intense competition. “Realteam and Spindrift especially have given us a lot to work on and a hard time on the racecourse. We are happy to finish just in front of them.”

Realteam for Léman hope fought back in the next race to take the win from Bertarelli with Spindrift in third, putting the two rivals back on tied points going into the day’s final race.

In this seventh and last race of the TF35 Mies series, threatening storm clouds rolled in over the lake as the compact fleet followed the transom of Alinghi Red Bull Racing as they slalomed upwind. At the leeward gate, Realteam for Lèman hope were in fourth, with Vitamina Sailing and Ylliam XII – Comptoir Immobilier between them and Bertarelli’s leading team.

As the radio call was made to finish the race at the second windward gate, Realteam for Léman hope found enough speed to leapfrog into second place, but not enough speed to catch Alinghi Red Bull Racing, who won the race and the overall TF35 Mies trophy.

Bertarelli added: “We are happy with our performance. We have learnt a lot from Realteam; we have watched them sail as they have had an edge on us upwind until now, but I think we have caught up. We managed to balance the boat out and resolved a bit of disadvantage we had on starboard, so we are happy with how the boat is going and the performance this weekend shows it.”

Completing the podium in third this weekend is Bertrand Demole’s Ylliam XII – Comptoir Immobilier. Their result was especially satisfying after a disappointing seventh in Nyon just two weeks ago: “We had a beautiful weekend, so it has been an absolute pleasure to be racing. The team is gelling together, we are starting to find our rhythm, and I’m happy with the preparation of the boat,” Demole explained.

“Our TF35 feels a lot more stable now as the onshore crew have focused on the trimmings and setting, and onboard, we are starting to get to know each other and work well together, which makes us more stable and confident,” he added.

Fourth-placed Spindrift capsized today, adding to the excitement of the final race sprint to the finish line. “We were upwind on the last leg of the day on starboard tack, and a strong gust hit us. The boat took off, and as we fell, the windward rudder tore away, so we lost all control and went over,” summarised helm Yann Guichard.

“It was quite impressive to experience, but there were no injuries, just a bit of material damage to the boat. We have a big week of work ahead of us now but are motivated to be ready for the Bol d’Or Mirabaud next Saturday,” he said.

In fifth overall was Guy de Picciotto’s ZEN Too, who’s third in race five breaks the points tie on countback with French team SAILFEVER, who finished the weekend in sixth. The new Italian team Vitaminia Sailing struggled with consistency and finished the regatta in seventh place.

Next weekend the seven TF35s will participate in the 83rd edition of the Bol d’Or Mirabaud, the world’s largest inland lake regatta. Having won last year, Demole is ready to defend his title. “The one rule I tell my crew is that I don’t care about second place, especially for races like the Bol d’Or; you go for the win. We will be on full attack and will try our best to bring the cup home.”

To find out more visit www.tf35.org