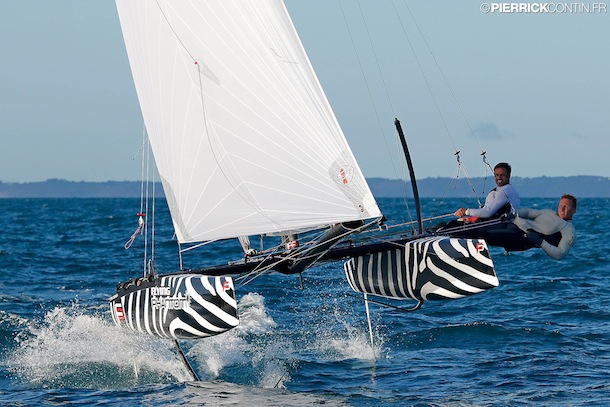 18/04/2015
As each year on the first weekend in May, Carnac Yacht Club will be organizing the Eurocat, one of Europe’s biggest gatherings of racing catamarans. This year, it will also be the first event for the Flying Phantom catamarans: The Flying Phantom Series – Eurocat 2015. Fifteen Flying Phantoms will be taking part in this big event on their very own race course off the main beach and the Yacht Club in Carnac – France.
The races will be completely one-design, so the Flying Phantoms will be racing against each other on a course specifically prepared by the Race Directors. These courses will be laid out to offer a reaching start with a clearing mark in the middle, a leeward gate, a windward gate and a reaching finish after rounding the clearing buoy. Various combinations will be set up in order to vary the races, which are scheduled for Friday 1st and Sunday 3rd May.
On 2nd May, the fleet will compete in the Eurocat long distance race, which involves crossing Quiberon Bay and rounding the island of Houat. For this event, the Flying Phantom will line up alongside all the other catamarans competing in the Eurocat. Last year, Gurvan Bontemps and Benjamin Amiot shattered the Eurocat long distance race record improving on the previous time by 24 minutes by finishing after 2 hours, 5 minutes and 20 seconds. Many of the competitors this year will be aiming to establish a new record.
Some of the big names of French sailing will be present for this maiden event in the Flying Phantom Series, including Team Momentys : Franck Cammas – Antoine Joubert, Sébastien Rogue – Christophe Carbonnières, representatives of the Phantom Sailing Team : Billy Besson – Matthieu Vandame ; Gurvan Bontemps – Benjamin Amiot, as well as crews from Germany, Switzerland, Britain, the Netherlands and Belgium.
The Flying Phantom fleet will be gathering the week before the event at the ENVSN (The French national sailing school) on the Quiberon Peninsula for two training sessions on the 24th to 25th and on the 28th to 29th April. This will be an opportunity for Flying Phantom owners to take advantage of the know-how acquired by the Phantom International team, in order to improve their technical knowledge of the boat and improve their performance, as they prepare for the Eurocat.