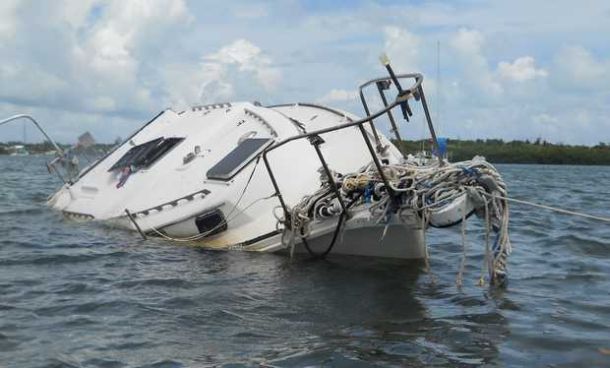 This is a prime example of a derelict vessel. Florida officials are looking at ways to lessen the problem. Photo KEYSINFONET

When so many people would love to own a boat and embrace the cruising lifestyle, it's a crying shame that so many vessels around the world lie abandoned or sunk at their moorings. In Related Content (top right) there is the story of a boat which ran aground in Moreton Bay and is now abandoned, and at Airlie Beach there is another which was washed ashore in a recent cyclone.

The problem is obviously not as bad here in Australia as it is in the USA, however. We recently came across this report from Kevin Wadlow of the Florida website Keysinfonet:

Florida Keys, August 1, 2015: Proposals will be floated to reduce the number of abandoned and sunken boats littering the shallow Florida Keys sea bottom at an Aug. 13 session in Key Largo.

A state survey on “anchoring of non-liveaboard vessels” outside public mooring fields drew 11,693 responses, including more than 600 from Monroe County.

The survey, completed in December, “found widespread and nearly unanimous support for a program to do something substantive about the problem of derelict vessels,” said FWC Capt. Gary Klein.

As part of five sessions around the state beginning this week, the FWC will host the 2:30 p.m. Aug. 13 open meeting at the Murray E. Nelson Government and Cultural Center in Key Largo to review derelict-vessel problems and outline possible solutions.

Bills introduced in this year's Florida Legislature sought to move on the derelict-vessel situation but they stalled in a contentious session.

From June 2014 through May, Monroe County spent $151,245 in Boating Improvement Fund money to remove 51 derelict vessels from Keys waters. Many more remain.