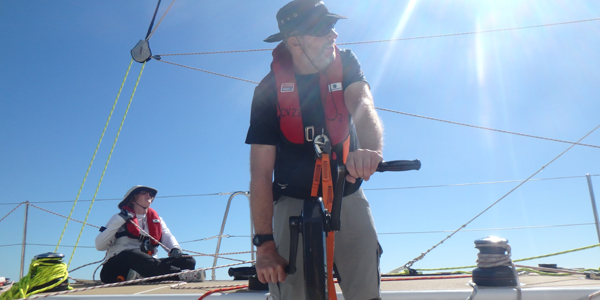 After 5600 nautical miles of racing, four teams made it to the Marina da Gloria yesterday within 14 hours of each other. Winners LMAX Exchange had to wait 36 hours to greet second placed Qingdao, but it was followed by GREAT Britain in third, Derry~Londonderry~Doire in fourth and Garmin in fifth place.

Along the eastern coast of South America, the competition is heating up for the remaining positions. At 0005UTC ClipperTelemed+ went into Stealth Mode, which allows its position to be hidden from the Race Viewer and the rest of the fleet for up to 24 hours. Skipper Diane Reid is hoping it can outwit Visit Seattle and slip into sixth place, the highest remaining position.

“Stealth Mode has been fully engaged as we try to gain full advantage over Visit Seattle. We are in the last 400 nautical miles to Rio and pulling out all the stops to get to that finish line ahead. Over the last 5000 plus nautical miles we have been building our skills through loads of repetition and training. We've been greasing the wheel and refining our processes. Now we are putting it all in place to try and squeeze out every extra little bit of speed we possibly can!”

Playing ClipperTelemed+ at its own game, Visit Seattle has put in a Stealth Mode request of its own, which will commence at 1200 UTC today. Watch this space…

Mission Performance, currently in ninth place, is celebrating after recording the fastest time over the Ocean Sprint which earns them two bonus points for the race. After finding out that none of the other teams had beaten its time of 28 hours 46 minutes, Skipper Greg Miller said: “We have won! This is not withstanding scrutinisation of the declaration pictures when we get to Rio, but we won by 30 minutes. Visit Seattle put in a really good time which we found out only five hours before we finished, so we were frantically doing the sums to see if we could still win. The team pulled together and worked hard and we were victorious! Well done Mission Performance Warriors.

“There is renewed vigour in the team since the Ocean Sprint, but looking at PSP Logistics which is 147 nautical miles ahead of us currently, it may be a stretch too far. We will never give up and will keep on fighting until the end.”

Less than 400 nautical miles now separates the fleet. At the tail, IchorCoal is 814 nautical miles from Rio as of 0800 UTC. However, taking into account the redress it is due upon race finish, based on its current Speed Over Ground (SOG) the Race Office has calculated that it would move up to seventh place.

From the Atlantic Ocean the fleet enjoyed undisturbed views of last night’s ‘Blood Moon’ lunar eclipse, but IchorCoal Skipper Darren Ladd says that short break didn’t stop them springing into action shortly afterwards: “The blood bit did take a bit of imagination but I think we all agreed it was reddish and at about 0200UTC the moon was fully eclipsed. It was at this point our top trimmer Matt 'Dingle' Berry, a round the world crew member, said the apparent is around at 120 degrees – action! In a flash – that appeared to last a few seconds but realistically was more like 45 minutes – the sheets were run and the lightweight spinnaker was rigged and hoisted. What a team!

“We slipped straight back into the pre-Doldrums Corridor routine of rotating helm, grinders and trimmer, and as I write we are doing a sprightly 10.6 knots. I'm hoping it will be spinnaker territory all the way to Rio now.”

The next teams are expected to arrive in Rio on Wednesday 30 September, but these times will change according to wind and other weather conditions so to stay up to date on arrival times, click here.