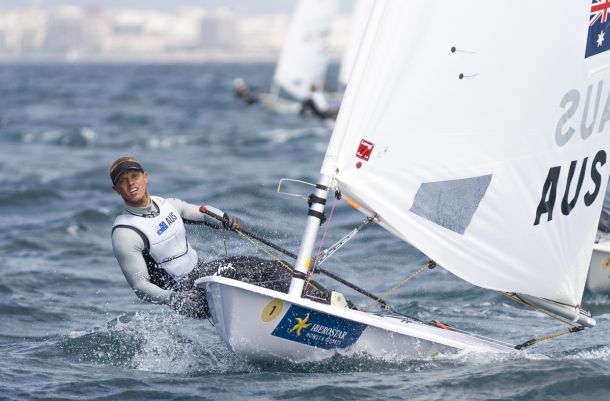 It was a very shifty last day of finals racing at Trofeo Princesa Sofia Regatta with Australian Sailing Squad’s 49erFX crew of Olympic silver medallist Olivia Price (NSW) and Eliza Solly (VIC) having their best day of the regatta thus far, winning the first two races of the day. This catapulted the pair into fourth place overall and thus into the top ten medal race.

Also competing in tonight’s medal race will be Laser World #1 Tom Burton (NSW) and Matt Wearn (WA), who finished day five of racing in fourth and fifth respectively. Racing has been tight in the Laser fleet as well as between the two, with the leader position changing over the week. Going into tonight’s final, double-point medal race Tom Burton is tied on points with third and only three points separate Matt Wearn from a podium spot, which will make for an interesting Australian Laser battle in the medal race.

“This was a tough last day of finals. The very light sea breeze made for some close and extremely tough racing. I only managed a 20th and a 18th today, but thanks to a solid week it didn't hurt me too much overall. I’m still sitting in fifth with points close for the top few spots and the medal race tomorrow will be the last chance to get on the podium,” said Matt Wearn after today’s racing.

Already earlier in the week, Olympic medallists Darren Bundock (NSW) and Nina Curtis (NSW) missed the opportunity to get into the medal race qualifying gold fleet after they dropped down the ranks following a mast breakage.

“We had extreme conditions on the first day of racing with everything between five to 40knts of breeze and for us it didn’t go too well. Going around the top mark, after we set the spinnaker, we went into a bit of an auto-gybe, rolled-over and broke our mast, which put us out for the next race and we lost valuable points,” Darren Bundock explained.

After posting strong results in silver fleet, including three race wins, the pair finished the regatta in overall 30th and are looking forward to Hyères next and not losing the ultimate goal out of their sight as Nina Curtis said: “We have a long-term goal and that’s to qualify for the Olympics. Australia’s already got the spot, but there’s three really strong teams all fighting to qualify for the spot and the selection will last for almost a whole year until the World’s in February, so it’s going to be a long, exciting journey.”

For most athletes the Trofeo Princesa Regatta Palma de Mallorca was a warm-up event for the upcoming ISAF Sailing World Cup in Hyeres, France (20-26 April 2015). The event also offered the opportunity to those who had not yet qualified for the ISAF Sailing World Cup in Hyères, France (20-26 April 2015) to secure their World Cup spot. To qualify for Hyères, they had to finish in the top ten boats not already qualified by ranking in the top 30.

This included Australian Sailing Squad’s new 49er combination of Will Phillips (VIC) and James Wierzbowski (VIC) who finished their first event together in 23rd, which secured them their place at the upcoming ISAF Sailing World Cup in Hyères.

“We've had a great week in Palma for the first regatta of the European season. This being our first event together, it was hard for us to know the level we were at. But we've now sailed 13 days straight and as the regatta progressed the improvements came fast and we settled into racing as a team. Our goal was to qualify for Hyères and it’s great to have made that first step in setting up the rest of our season,” James Wierzbowski said.

For Wierzbowski the 49er is a new class after having sailed the Nacra 17 last season and having been part of the Extreme Sailing Series team of GAC Pindar over the last couple of months.

“The transition from the Extreme Sailing Series with GAC Pindar was really great. I spent a week in Oman before heading to Palma and it was a nice to settle half way around the world before heading to the other side. Trimming the main on the Extreme 40 sharpens a whole range of skills required in the 49er and it's really good to mix up the style of racing with a big team,” he said about his transition into the new boat class. “We'll be flat out in the 49er until Hyères and can't wait to take it on.”

The second Australian crew who still had to qualify was Women’s 470 crew of Carrie Smith (WA) and Jaime Ryan (QLD). They did so convincingly by taking home their first international race win together on day one of the regatta and qualifying for gold fleet.

“It was definitely an exciting start to the regatta for us! The race win on day one was a great confidence boost and we were happy to place consistently within the top twenty since then and Gold fleet locked in our qualification for Hyères,” crew Jaime Ryan said after racing.

The on-going recovery from medical procedures Carrie Smith had to go through at the end of last year saw the pair out of the boat for most of the Australian summer and with the qualification for Hyères locked in, the decision was made to pull out of racing after day three.

“We arrived here in Palma with nowhere near the preparation we would have liked. But making the cut off for gold fleet locked in our spot for the World Cup in Hères, which is the first part of our selection trials for the Test Event in Rio this August, so we’ll be tailoring everything to be performing at that event. With this in mind, we decided not to race the last two days here – having met and even exceeded our goal of qualification, we now need to do everything to have Carrie at full strength for Hyères, and for the big year we have planned after that,” Jaime explained their reason to pull out of racing.

Australian Sailing’s Finn sailors of Jake Lilley (QLD) and Oliver Tweddell (VIC) just missed out of the medal race after finishing the regatta in 13th and 15th respectively. Australia’s second 49erFX crew of Tess Lloyd (VIC) and Caitlin Elks (WA) also missed out on the medal race with an overall 16th place as did Ashley Stoddart (QLD) in the Laser Radial. For all results see below.

The Princes Sofia Regatta IBEROSTAR in Palma de Mallorca, Spain (30 March to 4 April 2015) marked the start of the European season and kicked-off racing in the Northern Hemisphere for the Australian Sailing Team. Over 1200 sailors from 65 nations competed in the 46th edition of this international regatta, which has become a regular feature on the international regatta calendar.

The remainder of the team will be arriving in Europe over the next week for the third ISAF Sailing World Cup of the 2015 series in Hyères, which will be the first major benchmark event and will see all Australian Sailing Team and Squad Olympic contenders compete in France.