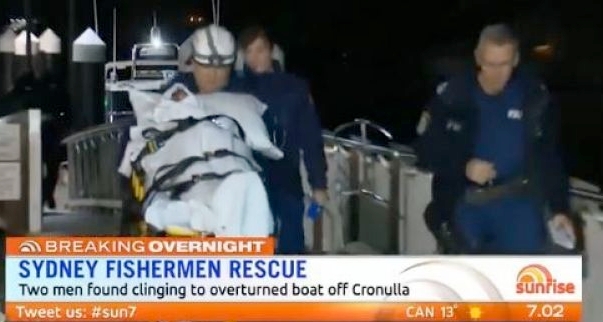 Two fishermen are fortunate to be alive after their 5.5 metre boat capsized off the southern Sydney coast on Saturday evening.

The men, aged 36 and 28, were not wearing lifejackets when they capsized in rough seas about 6pm on Saturday July 22nd. After clinging to their upturned vessel for almost four hours in freezing water, with hypothermia setting in, one of the fishermen decided to dive back under the vessel to retrieve their GME emergency beacon.

Finally activating the EPIRB at around 9.45pm, the emergency signal was received by the Australian Maritime Safety Authority in Canberra. After checking with the beacon point of contact, it was confirmed that two adult males had departed earlier in the afternoon to go fishing.

AMSA tasked the Bankstown based Rescue 209 helicopter and Water Police vessel 46 to home in on the beacon signal using Radio Direction Finding equipment. By 10.30PM the helicopter spotted the upturned boat, some 2 kilometres off of Sydney’s famous Cronulla beach, with one man in the water and the other clinging to the hull.

Both survivors were pulled from the sea by the police and transferred to Sutherland Hospital suffering from what was described as mild to severe hypothermia, with one survivor also suffering a head injury.

This rescue occurred on a weekend of extreme surf conditions including seven-metre swells and warnings from the NSW Bureau of Meteorology not to go rock fishing, swimming or boating along most of the NSW coast.