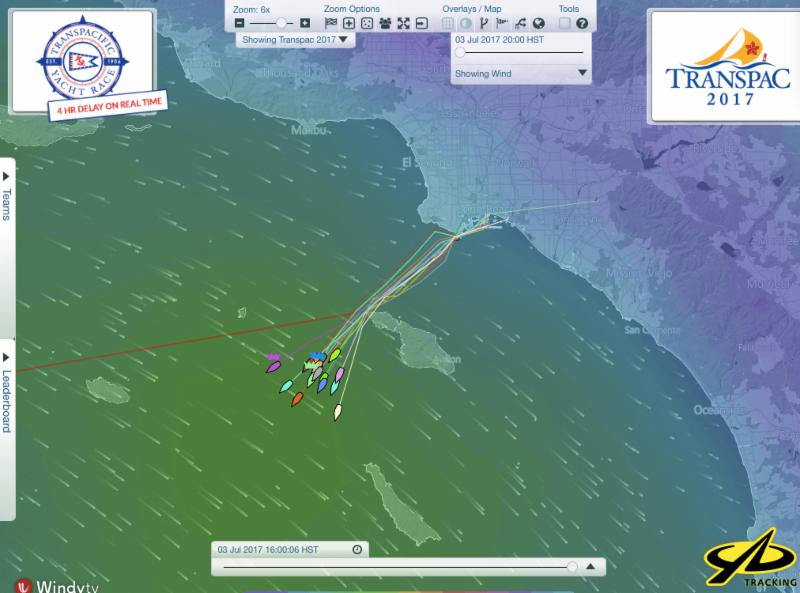 LOS ANGELES, CA – Seventeen yachts in three divisions set off yesterday in the first wave of three starts to the 49th edition of the 2017 biennial Transpac Race. Under sunny skies and light winds the fleet left the start area promptly at the start signal of 1:00 PM local time to head west towards the finish at Diamond Head in Honolulu 2225 miles away.

This was both an end and a beginning for these teams: an end of months and even years of preparation and planning, and likely a welcome relief after this arduous task, especially those doing the race for the first time. Finally setting out to sea will be a break from all the endless checklists that go along with planning a race of this length and endurance.

And of course the race is also the beginning of an adventure of many days and even weeks of sailing ahead, where crew camaraderie, seamanship, navigation and strategy and other skills will be tested. The best in each division will be rewarded with trophies and prizes at the end of the race, but even those who do not fare well will be rewarded with the satisfaction of having completed one of the world's oldest and greatest ocean races.

Last Saturday after the fleet received their trackers, race packages and final instructions at the Skipper's Meeting, the traditional Transpac Aloha Send-off Party was held with a Hawaiian-style celebration in Long Beach at the bandshell at Gladstone's. The event was fun way to wish the fleet fair winds in the voyage ahead, and was well-attended by participants, their families, organisers and sponsors.

The following day's Porsche Palooza sponsored by Circle Porcshe was also a way to burn off pre-race tensions with an impressive display of vintage Porsches and test-drives of new models.

And then yesterday the morning started with a parade of boats out of Rainbow Harbor en route to the start, with friends, family and well-wishers lining the shore to wish the fleet a fast and safe passage to Hawaii.

The weather at the start featured a pleasant westerly sea breeze and enough sun to reduce the chill of the coastal water, which for the teams will get colder as they head west into the first few nights of the race. The long-term forecast for this fleet is for the typical northwest coastal winds to start out to be moderate in strength, and as the fleet moves south and west it will bend more towards the northeast and become the famous downwind slide to Hawaii, and while the wind speeds in the current forecast do not show to be very strong, the pattern does look more typical and normal to this time of year than that experienced in the unusal El Nino conditions experienced in the last race in 2015.

Each entry in the Transpac has a YB GPS tracker, allowing their position to be shown with a four-hour delay built in so that this information cannot be used for tactical advantage on the race course. The first several hours shows the fleet clear of the West End of Catalina Island, with some teams – like John Sandrolini's Beneteau 47.7 La Sirena – diving south right away, while others – like Hiroshige Ikeda's XP 44 t Draconis – are being conservative and staying closer to the rhumb line course to Hawaii.

This position for the Japanese team is giving them an early lead in the race, but this may change: this race has always been a trade-off between sailing a shorter distance close to the rhumb line but risking light winds versus heading south for more wind but longer sailing distance. With help from the trackers, in the next several days we will see which strategy appears to be paying off.

The next start for Divisions 3 and 4 will be tomorrow, July 5th at 1:00 PM, also at Point Fermin.

The YB tracking can be found at https://yb.tl/transpac2017#.