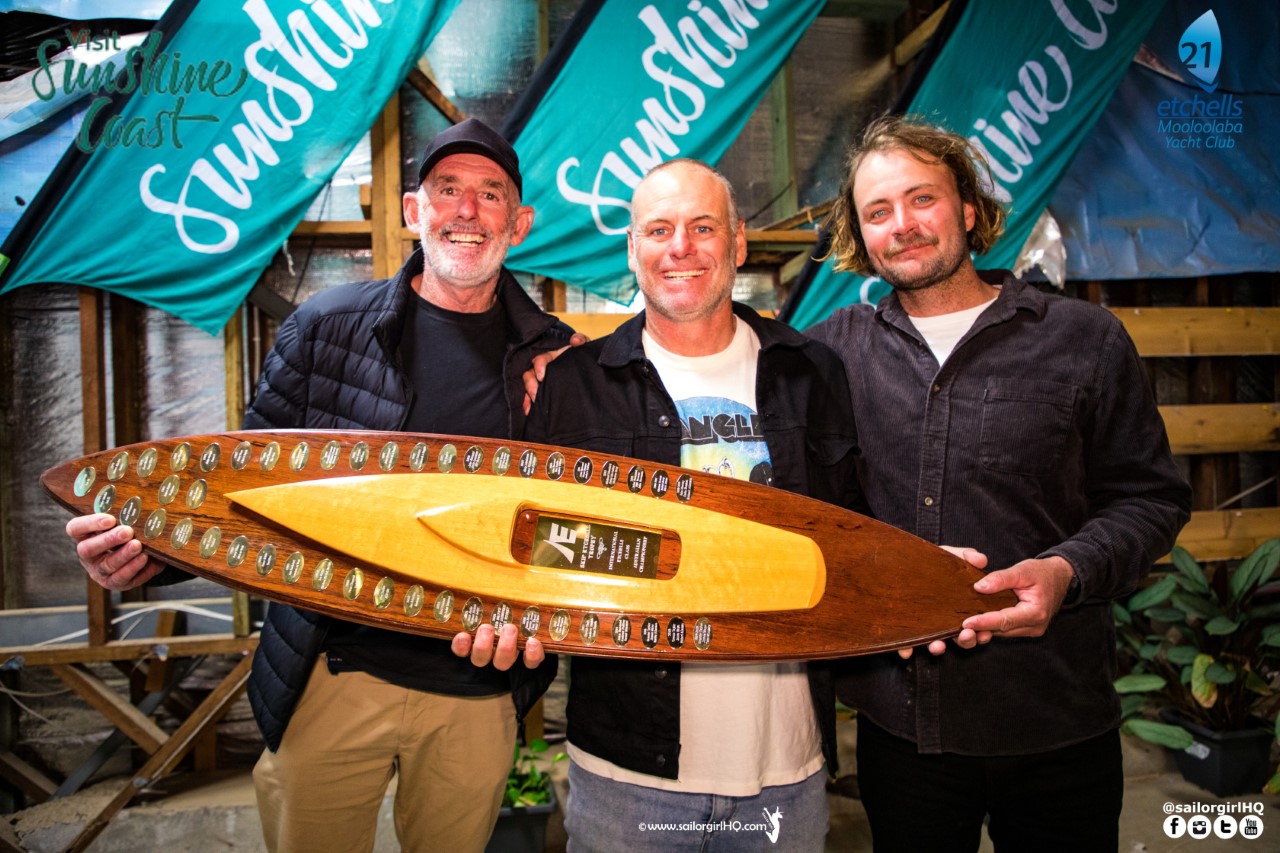 Peter Merrington and his team of Ian McKillop and Steve ‘Mothy’ Jarvin on First Tracks have won in the Etchells Australian Nationals and the Australasian Championships sailed in Mooloolaba over the long weekend.

Merrington won the final race of the regatta over Martin Hill’s Lisa Rose and Mark Bradford’s Pie, which mirrored their overall standings.

Race 8
The fleet was sent out on time for a 1000am start in a southerly breeze.

After a lengthy on water postponement, the breeze finally started to fill in at midday around 235 degrees. The starting sequence kicked off by 1230 when the wind stabilised at 245 degrees, and the Race Officer set the two-lap course with a 0.9 nautical mile first work.

First Tracks nailed the start in the middle of the line, but it was the boat end boats of Flying High skippered by JC Strong, and Yandoo XX, skippered by Neville Wittey, that were the early leaders on the first work.

Ciao, skippered by Douglas McGain, who was the leader after day one, rounded the top and gate in third followed by Paul Thackray’s Tranquility Base.

As Lisa Rose was the only other boat that could potentially push First Tracks from the top of the leaderboard, it was no surprise to see these boats close together at the top of the work seventh to Martin Hill and 10th to Merrington, and then on top of each other down the first run.

Yandoo XX and Flying High were well in front at the bottom of the run, taking the starboard and port bottom gates, respectively, before both headed to the left-hand side of the work which had paid on the first work.

Meanwhile, the battle for the overall lead had firmly moved into the hands of First Tracks which had moved up to sixth around the gate having also passed Lisa Rose on the run, which rounded the bottom in ninth.

While it appeared that Wittey and his youth Royal Sydney Yacht Squadron crew were continuing to open their lead on the fleet up the second work, the breeze had other ideas, as it started to pivot to the right-hand side of the course. This resulted in a major shakeup of the placings.

It was the regatta leaders on First Tracks who fared best to lead around the final mark of the course, followed by Tag skippered by Todd Anderson, Lisa Rose, Mark Bradford’s Pie and Yandoo XX, which fell back to fifth.

The places by the finish mimicked the overall championship results, and solidified the win for Merrington, McKillop and Jarvin on First Tracks, who had secured the win without needing the ninth race of the series in the National Championship, but not the Australasian Championships.

Race 9
After another on water delay following the large right hander in Race 8, the Race Officer got the racing away for Race 9 just after 1400 hours with the limit for racing looming at 1430.

The race was not to be and was called off at 1426 hours while the boats were approaching the top mark with breeze threatening the course from both sides.

“To win in those conditions, and by such a margin is a pretty impressive feat,” she commented on the performance of regatta champions First Tracks which secured not only the Etchells Australia Nationals, but also the Australasian Championship, “It was just not easy.

“It’s always really great to work with people who are so enthusiastic they just keep coming back smiling no matter what you ask them to do. It’s just amazing to work with people like that,” Davis said of the Mooloolaba Yacht Club team of volunteers.

It was a tough regatta for the volunteers and organisers following the Victorian lockdown and a major shuffle of the regatta crew, who all had to step up to make the program happen. Congratulations to all.

Special mention to the regatta organising committee, Trevor Martin, Suzanne Mabbott, Warren Myles, Mark Coghlan and Kerri Smith for their efforts to make this event happen given all the challenges.