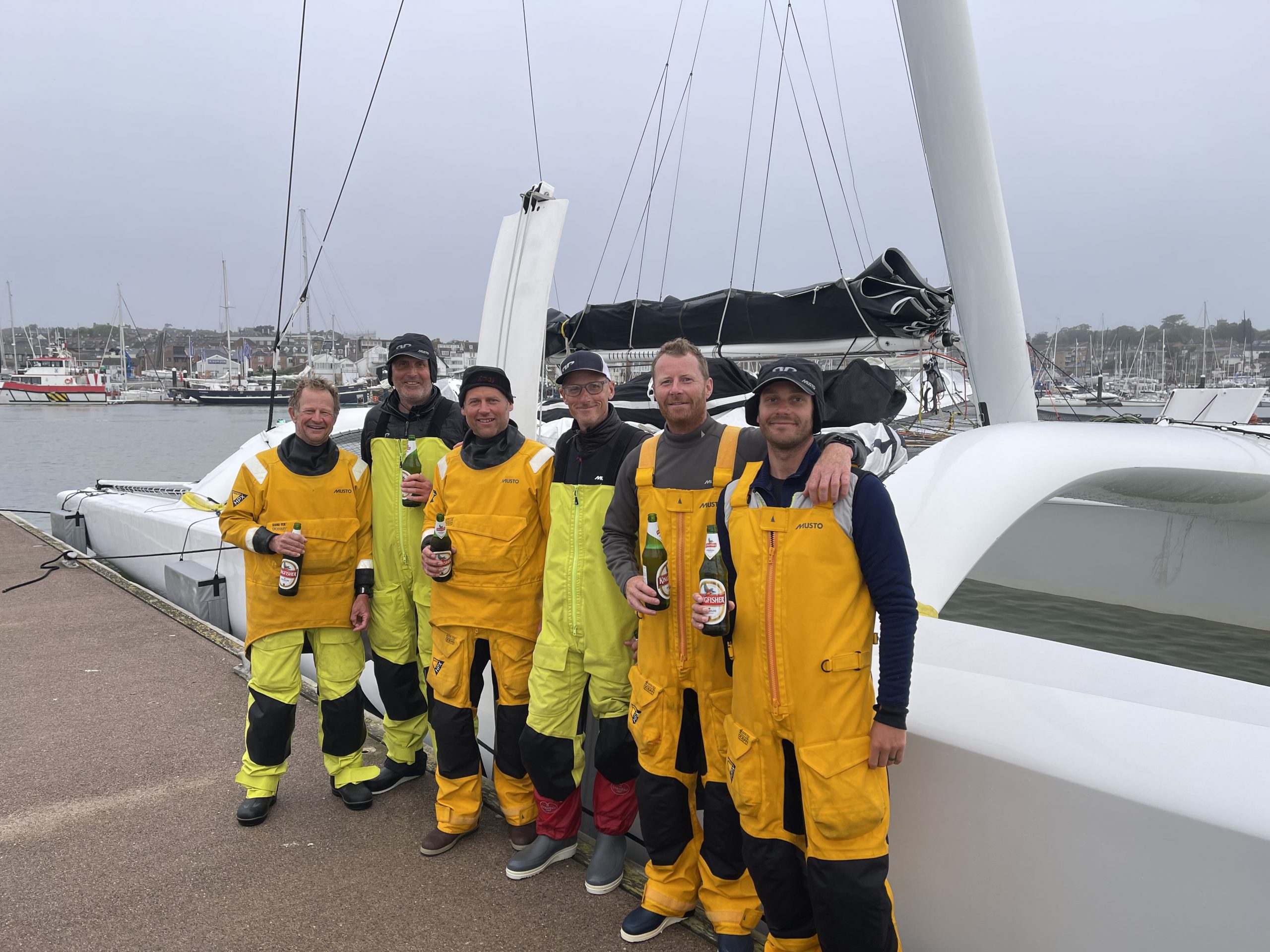 In her first outing since the beginning of the pandemic, Jason Carroll’s MOD70 trimaran, Argo, last week blew away the existing record for the passage between Bermuda and Plymouth, UK.

The previous record for this 2870 nautical mile course eastbound across the North Atlantic was set in May 2016 by American Lloyd Thornburg’s sistership, Phaedo 3, with a time of 5 days 11 hours 57 minutes.

Argo’s 4 days 19 hours and 30 minutes (measured, but still subject to ratification by the World Sailing Speed Record Council) was 16 hours 37 minutes or 14.4% faster.

Argo’s average speed for the direct course was 24.85 knots. In fact, including several gybes, Argo sailed 3,347 miles through the water at an average speed just under 29 knots, making it one of the highest speed passage records ever set by a MOD70.

“It was great, everyone was very experienced, and we had good drivers, so it was very smooth,” recounted Brian Thompson, skipper/navigator for the record.

“Everyone just kept in their rhythm and we were just trying to keep in the ‘Goldilocks zone’ wind-wise going around the high, not too close to the sun and not too far away…”

This was a rare occasion when owner Jason Carroll was not on board as he has newly become a father.

“The New York one was set by the 40m long Banque Populaire V at a very high average speed and that is not something we could accomplish with this boat. Nonetheless Bermuda-Plymouth is an official transatlantic record, it meant something to us and was a goal we knew we had a realistic chance of beating.”

While Argo’s centre hull has a regular rudder and daggerboard, on each float, there is an inverted T rudder and a J-shaped lifting foil, the rake adjustable on both. This is a slightly less extreme foiling arrangement than on Giovanni Soldini’s Maserati and the latest 30m long Ultime trimarans.

“Our foils get the leeward hull up and flattens the boat out, so you have more power – they really work nicely,” explains Thompson.

“It feels more like a 90-footer than a 70 because both upwind and downwind the boat is much more level.” The foils have proved 2-3 knots faster in flat water and in waves enable them to maintain high speeds but to sail deeper angles in greater safety.

“With the old set up we were just constantly scared of pitchpoling – digging the bows in and having them not come out,” adds Corning.

“With this set-up that is really hard to do – the bows are lifted and that’s very safe and when you come down off a wave or crash into the wave in front of you, then the rudders’ pitch control gives you a lot of confidence.”

Argo was delivered to Bermuda from Newport, RI in anticipation of a strong weather window for the attempt. In the end they had been delayed leaving in order to let a storm pass and by the time they reached Bermuda the opportunity for setting the record to Plymouth was fading.

“There was a high-pressure ridge over the UK and it was looking light for the last 200 miles on almost all the models,” explained Thompson. However soon after their arrival in Bermuda the forecast improved showing ridge, extending east from Bermuda across to Europe, dropped enough to leave a small corridor of breeze into the finish.

En route the Argo crew was able to broad reach on starboard across the top of ridge, putting in the occasional short hitch north to reposition themselves into stronger breeze.

“You could be near the high in 10 knots of wind or you could have 30 knots a bit further north. We were trying to find that Goldilocks position of 22 knots of wind where we had one reef, genniker and J2 and the waves weren’t too big…” said Thompson. The top speed during the record was 37 knots.

For the tricky approach into Plymouth they still saw 12 knots of wind, enough to continue propelling them towards the finish at record pace.

The crossing was blisteringly fast but was not without incident. Argo suffered two collisions with unidentified floating objects, both were on her port side.

The first on night three, while she was north of the Azores, broke the linkage bar running along the aft beam joining the port and central rudder quadrants. This prompted some rapid middle of the night repair work by the crew.

The second collision impacted the foil and damaged the rear of the case, not so badly that the foil was jammed in position but making it difficult to raise and lower.

Thompson has huge experience racing large multihulls gained over the last three decades. Reflecting on the latest record he said: “We did four 600 miles days in a row, which would have been unheard of a few years ago. I remember when we sailed 580 miles on Playstation and that was enough to set a new 24-hour record in 1998.”

From here Argo is likely to continue training in the UK with her next major fixture being August’s Rolex Fastnet Race where she will line up against Giovanni Soldini’s Maserati. Her schedule will then take in the Rolex Middle Sea Race rounding out the year with the RORC Transatlantic Race ready for the 2022 RORC Caribbean 600.