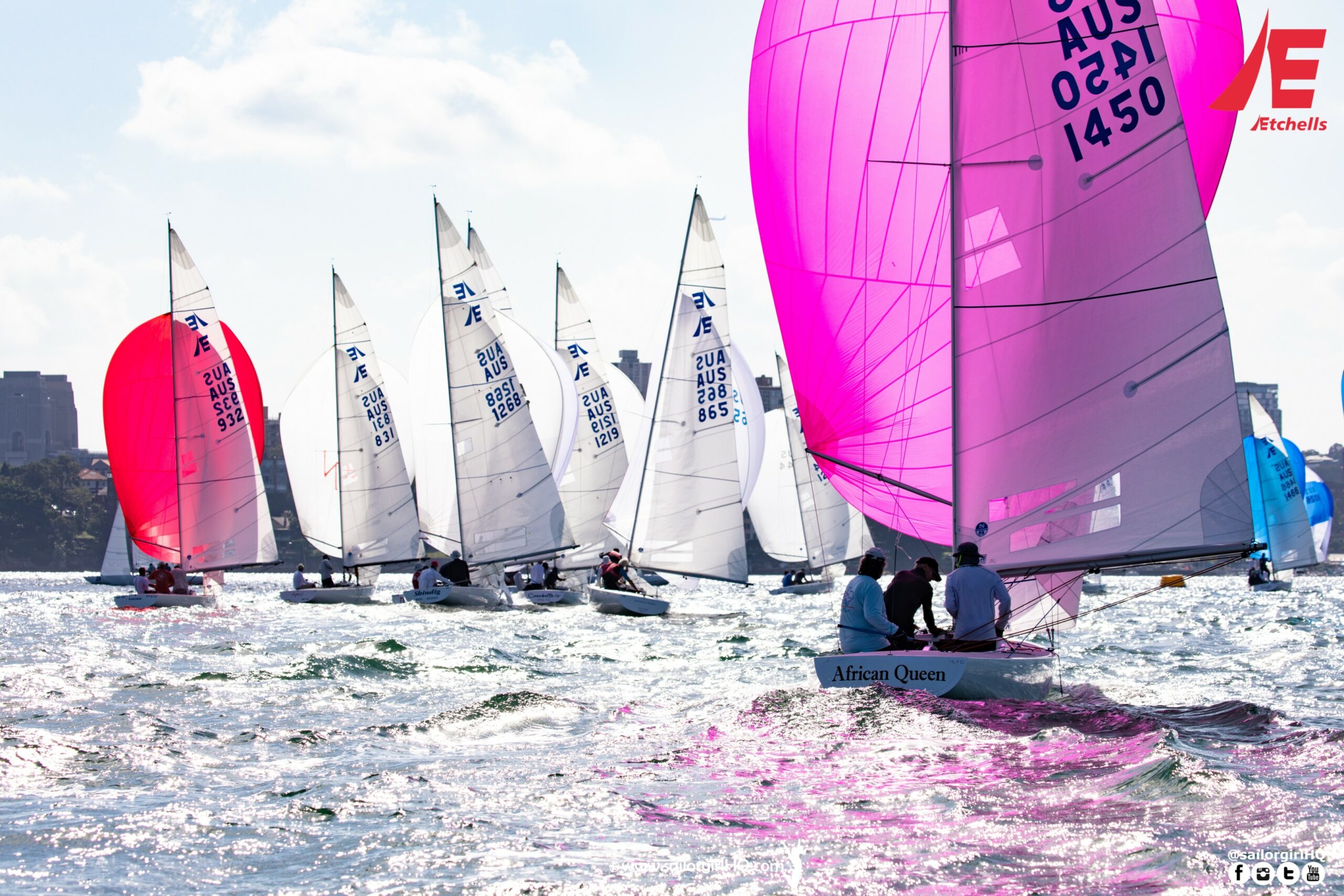 The 2022 Etchells NSW Championship commenced Friday on Sydney Harbour from the Royal Sydney Yacht Squadron (RSYS) and First Tracks, skippered by Peter Merrington with Ian McKillop and fill-in bow David Gilmour posted a dominating 1, 1, 2 to lead after day one.

Matt Whitnall, Rob Bishop and Adrian Dunphy (Corinthian) on Dawn Raid are in second overall, while Flying High, skippered by Jean-Claude Strong with Seve Jarvin and Sam Newton, is in third.

Race 1 started in an 8 knot easterly after a short postponement at 1245 local time. Initial leader was Tango, skippered by Chris Hampton, followed by Doug McGain’s Ciao and Dawn Raid.

First Tracks had an exceptional first run, and went on to win the race, followed by Dawn Raid and Adam Magpie, with Col Tapper on the helm, a fantastic race from one of the new youth teams to the class.

“Thanks to Mothy (Steve Jarvin) firstly for allowing us to sail this boat as part of the Etchells youth program,” 19-year-old Tapper said.

“We got out there and just loved racing the boat, and with each other. The fleet is pretty awesome so, yeah, it hooked me. Hopefully I’ll do more in the future.

“It was pretty awesome [to come third]. We were lucky with our start and then just built our way up the first beat and kept in touch. In these boats, once you get your nose out in front and some clear air, it’s pretty good. The difference in speed is so small that it’s really important that you are on top of everything and continue to get better,” he said.

“When we get it right, we seem to be going alright, but there are times when we have definitely been getting it very wrong. We have lots of positives to build on though and we will be back out there racing tomorrow,” he finished.

Race 2 got away on the third attempt under a Black Flag. Hampton’s and Boillot’s were pinged for being over early.

Wobbegong 2, skippered by Roger Perrett, made the most of the shifty track, rounding the top mark with a buffer back to the rest of the fleet.

It wasn’t enough of a buffer to fend off the winners of Race 1, First Tracks, which again made big gains downwind to lead around the bottom gate. They weren’t headed from there, JC Strong’s Flying High sailed through to place second, and Wobbegong 2 held onto third.

For the third start, the pin was favoured, and won by Tango skippered by Chris Hampton, with Sam Haynes and Cameron Miles, coming back after their Black Flag.

However, the breeze curled 40 degrees to the right from the start and up the first work. Not surprisingly, First Tracks was there to make the most of the southerly shift and went on to lead around the top mark.

With an upwind finish for the first time in the series, Christian Brook, RSYS Commodore and his team of Ant Elliot and Adam Roberts-Thompson on Ciao Bella took the lead from the right side of the course on the last work to the finish. They went on to win the final race of the day over First Tracks and Neville Wittey and his RSYS youth team of Kyra Early, Zac West and Jameson Prescott on Yandoo XX.

On First Tracks, David Gilmour said from the bow of his first day on an Etchells, “It’s always good to sail in a good class and to do something new and different. It’s always good sailing with a good team, so that was quite good as well.” Straight after he left to sail on the Volvo 70, Willow.