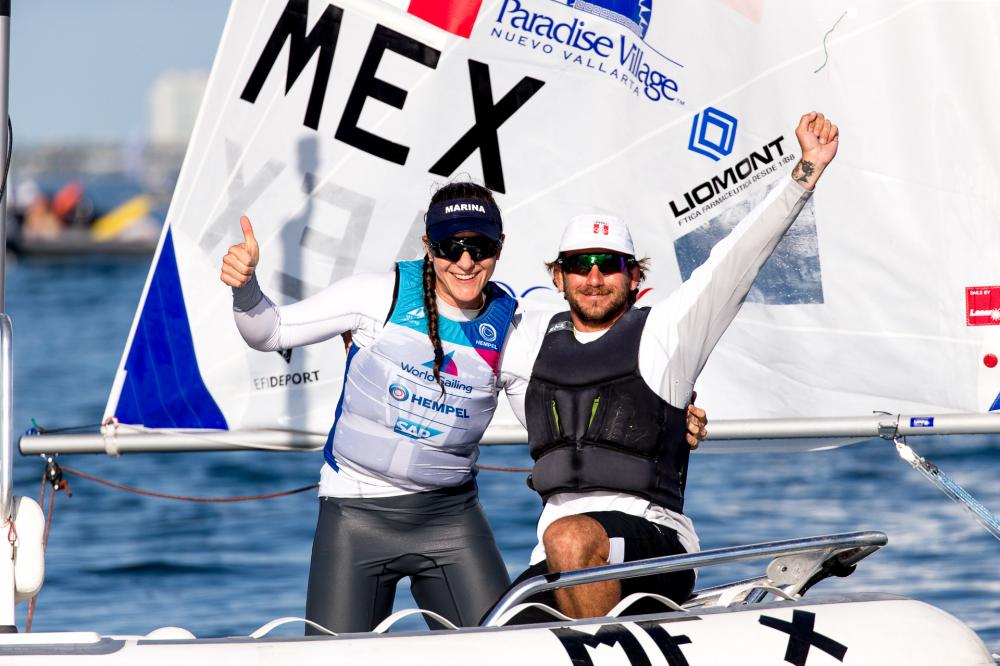 The fifth and final day of fleet racing wrapped-up Friday at the 2020 Hempel World Cup Series Miami, when many of the 182 sailors from 45 nations raced with Olympic qualification on the line, targeting a spot in Saturday’s pivotal Medal Races.

Hempel World Cup Series Miami is the final opportunity for North American nations to qualify for the Tokyo 2020 Olympic Games across the 470, RS:X, Laser, Laser Radial and Finn fleets.

Elena Oetling qualified Mexico to Tokyo 2020 in the Laser Radial with further Mexican spots all but confirmed in the Finn and Men’s RS:X.

Canada booked a ticket to Tokyo in the Men’s 470 and Women’s RS:X, with the USA confirming its Women’s 470 place. It will go down to the wire in the Laser with Trinidad and Tobago looking to fend off three Canadian sailors in hot pursuit in Saturday’s Medal Race.

A light breeze posed challenges again on Friday, testing the nerves of the sailors competing with so much at stake. An additional race was scheduled for the Men’s and Women’s 470, Laser Radial, and Laser fleets due to Thursday’s conditions that limited the number of races completed. The Men’s and Women’s RS:X, Finn, and Laser classes managed just one race each in the light breeze on Thursday.

Friday’s weather forecast was mostly sunny with temperatures in the mid-70s. The breeze was on the low end throughout the day in the 5-6 knot range.

The Women's and Men's 470 and Finn classes each got one race completed this morning. Following a lengthy afternoon postponement, racing resumed for the Finns and they completed their second race of the day. Racing started in the afternoon for the Laser Radials who completed one race. There was no racing for the Lasers or RS:X fleets.

Oetling officially qualified both her nation and herself for Tokyo 2020 with her performance this week. The Mexican sailor posted five top 10 finishes in the 23-boat Laser Radial fleet.

“I qualified Mexico and I qualified myself for the Olympics,” an excited Oetling said.

“I don’t know how to feel about it. It’s something I’ve been working towards my whole life. I just cried, but I was so happy. It’s just a great feeling to accomplish something I’ve worked very hard for. It was a hard day because we had a lot of waiting.

“The mental part becomes very important. You always have to be ready because at any moment a race can start. When we finally got the race in it was super-light, so it was hard for me to manage the race. I knew what I had to do – stay as close to my competition as possible and don’t let them have too many points. For me it was just that, having fun and just staying close to them.”

Leading the Laser Radial fleet is Erika Reineke of the United States. She has a narrow two-point lead over Vasileia Karachaliou of Greece and a five-point edge over Matilda Talluri of Italy.

The competition at the top of the Men’s 470 is extremely close. Australia's Mat Belcher and Will Ryan are in first place, but even on points with Japan's Keiju Okada and Jumpei Hokazono. Only seven points separates the top six teams in the class as they head into their Medal Race so it’s all to play for.

“At the end, we managed to beat a few of our direct rivals so we’re a bit better in the overall results,” Garcia-Paz said.

“We’re fourth now and tomorrow anything can happen. Seven or eight boats could win so we will see. We’re happy, but we know we can do better. We have to push tomorrow and do our best.

“Miami is really important for us. It’s the first race of the Olympic year and almost everyone came here to compete, so it’s been good to race against them. Tomorrow we will fight for the medals.”

Entering World Cup Miami, the race for Olympic qualification in North American for the Men’s 470 was between Canada and Mexico, who have three teams respectively. Canada prevailed and qualified its nation for Tokyo 2020. They were led this week by Jacob Saunders and Oliver Bone. They had their best race of the regatta today by placing 13th.

“It was tricky out there for sure,” said Saunders. “It can always be a little nerve racking going into a light race like that with an unsure forecast.

“We played it well. We kept making good decisions throughout the race and put up a solid score and were able to solidify the country spot for Canada. We now go into the final section trial for Canada in the lead so we’re happy for that and feeling good.

“My crew Oliver and I, we started this campaign at the last minute,” he explained. “We were both working fulltime and sort of came out of retirement to make this happen. We’re happily surprised with how quickly we got back into the boat and how we felt sailing again. It’s been pretty natural together.

“Oliver started coaching me nearly ten years ago, so we’ve had a long relationship and now we’ve started racing together. It’s been going great and the attitude in the boat is really good and we’re psyched to be back at it competing again. It’s a lot of fun.”

Bone was also pleased with today’s performance in the light conditions. “Conditions were obviously challenging. We looked for wind but didn’t necessarily get to it, but we felt our strategy went well and we kept it simple. We made some gains where we could, especially on our downwinds where we made some big jumps.”

Greece had a strong day on the water today in the Women’s 470 with tandem Maria Bozi and Rafailina Klonaridou. They moved into second place after finishing second in the single race. They now trail leaders Camille Lecointre and Aloise Retornaz of France by nine points.

“So far we are satisfied with how we’re going,” said Klonaridou. “We’ve made some mistakes, but we’re getting there. We hope for better conditions tomorrow so we’ll see what happens.”

The only nation in the running for the North American Tokyo 2020 spot in the Women’s 470 is the USA. The event also acts as an American team qualifier, with Nikola Barnes/Lara Dallman-Weiss, Carmen and Emma Cowles as well as Atlantic and Nora Brugman.

The Brugmans and Cowles qualified for tomorrow’s Medal Race by finishing the fleet racing stage in eight and ninth, respectively. The Brugmans won today’s race and have a one-point edger over the Cowles.

Caleb Paine of the United States has won gold ahead of the Medal Race as he has an unassailable lead over Kyle Martin (CAN). Across the 10 race series, Paine has taken five wins and four seconds. An 11th in Race 9 today was his worst score of the week. Martin of Canada won Race 10 and now stands in second place. Luke Muller who is even on points with Martin is in third.

Mexico’s Juan Perez Soltero is squaring off against Bermuda’s Rockal Evans for the North American Tokyo 2020 Finn spot. Heading in the Medal Race, Soltero is firmly poised to take the spot for his nation.

Early start times are planned for the Saturday’s Medal Races, beginning just after 09:00 with the Women’s 470.