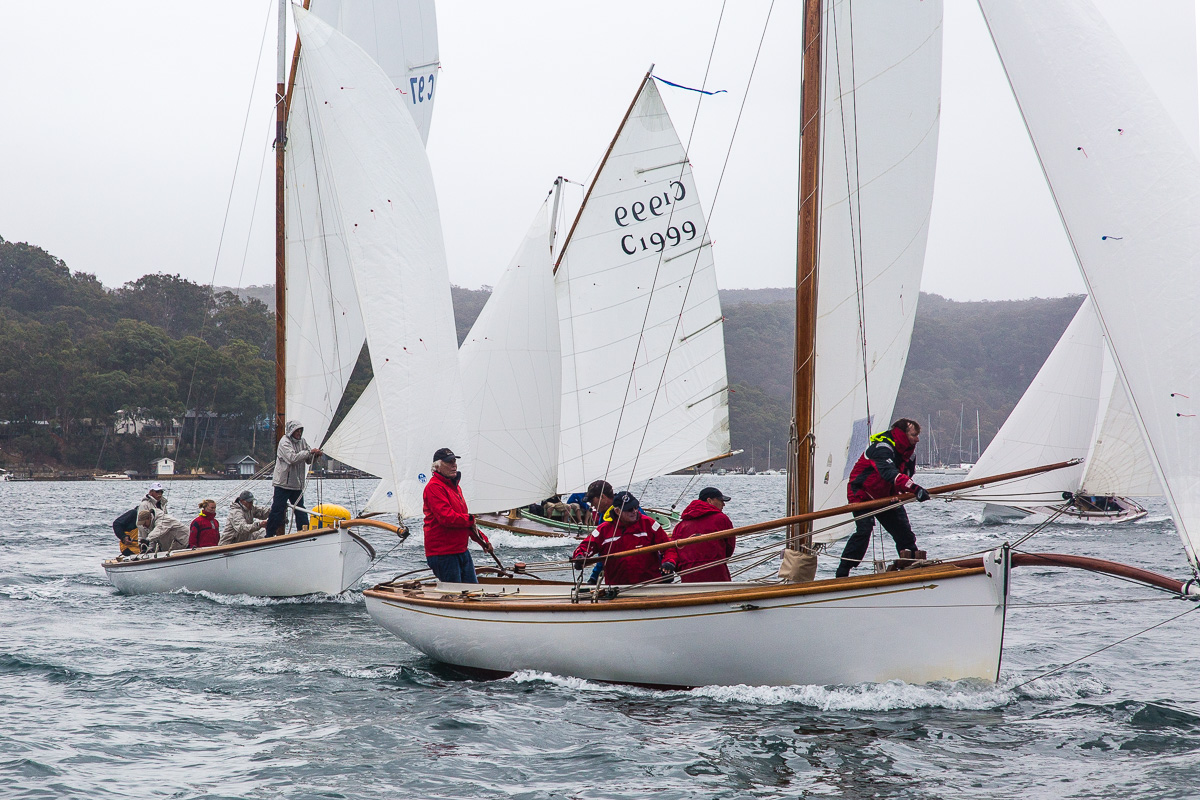 The name says it all. Don Telford’s Tenacity became the first non-Victorian crew to claim an Australian title in the historic Couta Boat class when the Sydney team wrapped up the four race series on a tricky Pittwater on Sunday October 15, 2017.

“We had no idea if we’d won overall after today’s race,” said Telford. “It’s a wonderful win; to take it to the Victorians was absolutely magnificent.” Long-time mate and tactician John ‘Steamer’ Stanley – who’s very pleased to knock off an Australian championship at the age of 70 – added: “after the Sydney regatta we worked out you had to be in the top ten in every race”.

Tenacity finished tenth from an outstanding multi-state line up of 22 Coutas in the final passage race around Scotland Island and then north to Mackerel Beach and back south to the area known as ‘the pond’, in 8-10 knot east sou’easters.

Following one general recall and a re-jig of the line by race officer Elaine Fowler and her all-female race management team, Stanley opted to play it clean at the start and from there Tenacity’s crew of six left nothing behind, knowing the championship result rested on their final score.

Speaking on the class in general Telford commented: “Steamer was saying for old guys this is the only class left; everything else is sailing on the water not in the water. These are beautiful and very hard boats to sail.”

The likes of professional yachtsman Steve McConaghy, coach Rod Hagebols and Moth sailor Josh McKnight raised the bar at what was already a very serious class meet. Serious enough for 10 Victorian owners to transport their Coutas on B-double trucks from the Mornington Peninsula and one to send his boat the length of the continent from Perth, for which the co-owner of Eclipse, Jim Wilshire, was awarded a special trophy for the furthest travelled.

At the closing awards presentation held at the host Avalon Sailing Club, James Mighell acknowledged the hospitality and work of the volunteers, chiefly NSW president Larry Eastwood and his band of helpers. “They not only organised the sailing but also the interstate boats to be lifted off the trucks and set up in perfect condition, the hospitality and did all sorts of other things, particularly for me. I ran out of fuel twice in 24 hours!

“Bringing the boats to Sydney was a crazy idea borne of people with foresight. But for it we’d all be sitting around our own little clubs. It’s people like Larry and Couta boat builder Tim Phillips who have the vision to drive ideas like this one,” Mighell added.

On combined scratch (over the line) results it was a Victorian whitewash with the top six racing for the Sorrento Sailing and Couta Boat Club, led by Nick Williams’ Wagtail.