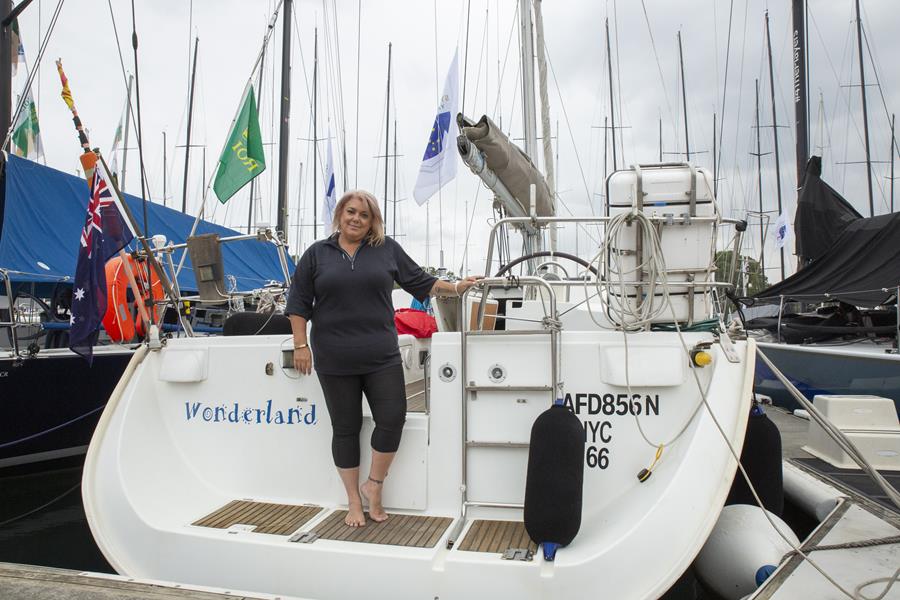 At the 1pm start of the Cruising Yacht Club of Australia’s (CYCA) 75th Sydney Hobart Yacht Race on Boxing Day, history will be made when Rebecca Connor and her boat, Wonderland, take part in the race for the first time.

Connor, from Stockton on the NSW Central Coast, has been sailing for only two years, and is set to become the first indigenous owner/skipper to race in the Rolex Sydney Hobart.

“I sailed a little many years ago. A friend, Joe de Kock, came out from South Africa for the Sydney Olympics – he really introduced me to sailing. But I have six boys who keep me quite busy, so I didn’t keep it up,” Connor said.

A holiday in Greece reignited her interest. “I jumped on a 50-foot yacht with eight people I didn’t know and went off for a week – and loved it. I said to my husband ‘let’s buy a boat’.

“My husband is a mad-keen fisherman, so he wasn’t thinking ‘yacht’, he was thinking ‘motor boat’. Nevertheless, he supported my dream, and we found Wonderland (a Beneteau Oceanis 473) in Yeppoon, Queensland.

“The boat was already called Wonderland. In our culture, Wonderland is related to The Dreamtime, which fits nicely. I took her out for a sail, and Joe (de Kock) said to me, ‘If you don’t buy this yacht, I will’, so I bought it. The owner, James Toole, was so honest and came for a sail with us. We agreed on a price instantly, and shook on it,” Connor explained.

Connor explains her family history thus: “I have a mixed heritage with secrets and unknowns. My father’s side is quite dark, but my mother is lighter and her family maintain it is a Spanish/Aboriginal heritage – so we’re a mix.”

Connor says she dealt with a lot of Aboriginal people in her workplace: “So I do identify with our culture. I’m very respectful of culture. “I was brought up all over the place. My elder sister was born in New Guinea, I was born in Wee Waa in NSW and eventually we settled in Newcastle. My father was a crop duster pilot, but when we moved to Newcastle he became a fisherman.”

Connor says; “I am both surprised and not surprised to be the first Aboriginal owner skipper. Yachting is seen as elitist and hard by some people. I guess it’s special to be the first in the fact it will break down some barriers.”

Is she nervous about the 628-nautical-mile race ahead? “I feel quite calm. I’m actually looking forward to getting out of the Heads and just sailing…”

And while Connor may be new to the race, she says, “Half the crew have done the race before; Kyle Hancock (her second in charge), Paul Flanagan and Oonagh O’Donovan all sailed on Freyja in 2017. Meika Wright has also done it before. I am the skipper and my primary aim is to finish with the crew and boat intact.

“Sailing has been a real therapy for me; it’s saved my life. I love sailing at dusk especially, it’s so peaceful,” she said, adding: “There is no way I could have done this without my husband, Allan’s support.

“My three youngest boys, 11, nine and seven sail. They are doing the Tackers program at Newcastle Cruising Yacht Club. It’s a very good program there. We occasionally sail at Port Hunter Sailing Club at Stockton, but more socially.

“My boys are all proud of me. My older boys think I’m a bit mad, but not surprised by it. I hope they are inspired by what I’m doing – that they learn when you put your mind to something, you do it.  Through the race, I hope to inspire more people to get involved in the sport,” Connor ended.