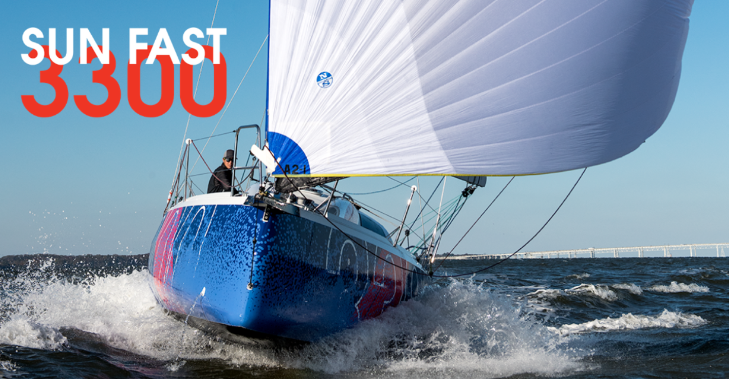 Jeanneau has announced that world-renowned American yachtsman and North Sails President Ken Read will campaign the new Jeanneau Sun Fast 3300 in the double-handed division of the 2020 Fort Lauderdale to Key West Race along with navigator Suzy Leech. The plan is to continue with a schedule that includes other events on the double-handed offshore sailing calendar in 2020, a discipline that is growing in popularity especially after the announcement of a mixed gender double-handed offshore class in the 2024 Olympics.

From the drawing board of Daniel Andrieu and Guillaume Verdier, the Sun Fast 3300 is the all-new offshore race boat from Jeanneau. Designed for short-handed teams who are looking for a high performance platform, the boat is capable of long distance racing competitively under modern rating rules.

“It’s an exciting move for us,” said Nick Harvey, president of Jeanneau America. “Short-handed sailing has been growing in interest globally, and Jeanneau is proud to develop a production boat that is capable of taking those sailors where they want to go.”

North Sails has been an early partner in the development of the Sun Fast 3300 globally, and now in North America.

“Jeanneau America approached us, and worked with our 3300 class leader Allan Terhune early in the process of bringing the boat to the North American market,” explained Read. “Double-handed racing is catching on worldwide, inspired by the passion and growth of short-handed sailing in countries like France and England.

“Developing a sail plan and shorthanded inventory with Jeanneau began with our North Sails team in France, and we are now taking it a step further with a larger sail plan on the boats imported to North America. The Sun Fast 3300 sail package is built to work in any handicap rule. It has been a fun project so far, but now comes the hard work on the water!”

“The product we have put on the water is second to none,” continued Harvey. “Anyone in North America looking to grow in offshore racing should give the Sun Fast 3300 a serious look.”

The first double-handed event for Read is the 2020 Fort Lauderdale to Key West Race. This event is a staple of the SORC circuit, and race organizers are embracing double-handed racing by adding this new class. The 120-mile race is historically a great challenge, heading south between the Florida Keys and the tricky Gulf Stream before finishing in sunny Key West, Florida.

“Now that the Fort Lauderdale to Key West Race has decided to do a dedicated double-handed class, this is a shout out for boats and teams to come on down and have some fun. We can all learn together. As double-handed sailing begins to develop here in North America, we first and foremost have to make it fun. And this race is always a blast!,” said Read, “It’s brand new for Suzy and me and we can’t wait to get started.”

North Sails, the largest division of North Technology Group, is a world leader in sailmaking technology. North Sails holds the patent for 3Di, a unique composite construction process that produces high-performance sails that approach the shape holding of a rigid foil. North Sails is the sailmaker of choice on the majority of America’s Cup, Grand Prix, ocean race boats and Superyachts. North Sails offers a wide range of performance 3D and paneled sails for cruising sailors and is the world’s leading sailmaker for one-design classes with more National, World and Olympic Class victories than all other sailmakers combined.

Ken Read is one of the world’s most accomplished and celebrated sailors. American Read has twice been at the helm of Dennis Conner’s America’s Cup programs and he was named ‘United States Rolex Yachtsman of the Year’ on two occasions. He has won over fifty National, North American and World Championships to date. After skippering two podium finishes in the Volvo Ocean Races (2008-2009/ 2011-2012), Ken returned to his business and sailmaking roots as President of North Sails in 2013, and more recently has added the title of Executive Vice President of North Technology Group. While running one of sailing’s most prestigious brands he has continued to be very active in sailing. Amongst a long list of top podium finishes, he has been with teams that have been first to finish in nearly all of the major offshore racing classics and broken a number of world records, including the 24 hour monohull distance/speed record that still stands. Read served as a color commentator for NBC Sports during the America’s Cup. as well as commentator for America’s Cup TV for the 34th and 35th editions of the world-famous event. He is scheduled to return to TV screens for the 2021 America’s Cup.