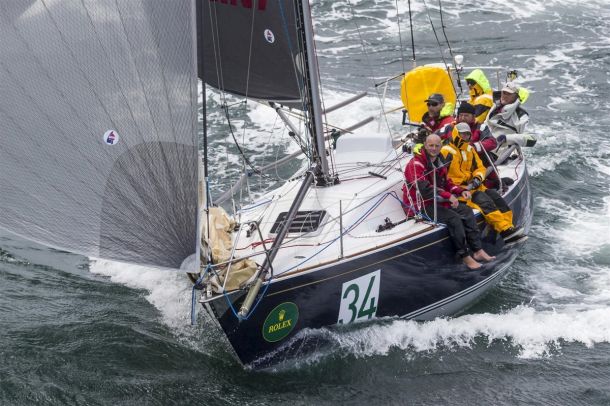 The first monohull entry for this year’s Sydney to Mooloolaba Yacht Race is Shane Kearns’ Sydney-based 34-foot Quikpoint Azzurro. Run by Middle Harbour Yacht Club in conjunction with Mooloolaba Yacht Club, the 469 nautical mile race starts on Friday 27th March 2015 and is open to both monohulls and multihulls.

“Somebody had to be first,” Kearns said. “I have been watching the online entry system since we returned from Hobart. Maybe everybody is still on holidays. At some stage we wanted to be first in something so we are pleased we are the first to enter. Even the name Azzurro ensures we are first in the sked.”

Kearns is keen to keep racing offshore right through the second half of the summer season. With the Gosford to Lord Howe Island race cancelled and no other offshore race out of Sydney until later in the year, the Mooloolaba race is a perfect fit for his program.

“This is the next offshore race. Otherwise we would have to wait for July. The Mooloolaba race is the only one of real length now that the Lord Howe race has gone. Waiting for the Gold Coast race, well half the year is already gone,” the Cruising Yacht Club of Australia fleet member said.

The Mooloolaba race is a return journey for Kearns. About 12 months ago Kearns found his boat, then named Shenandoah II, in Mooloolaba. Unable to sail the near-wreck anywhere he moved her to Lawrie’s Boat Yard in March where for several arduous months he restored the boat. He then sailed her south in time to make the start line of last year’s Sydney Hobart Race. They finished third in ORCi Division 4.

Kearns has competed in the Mooloolaba race several times in previous years with his sailing school entry, Komatsu Blue Lady. His last race north was in 2004 with his Mumm 36, Komatsu A Few Good Men.

Entries in both the monohull and multihull divisions for this year’s race are expected to flood in as many of the skippers and crew return to work from the end of January. The Notice of Race and online entry system are on the event website, http://smyr.mhyc.com.au.

For enquiries on the 2015 Sydney to Mooloolaba Yacht Race, please contact the MHYC Sailing Manager, Andrew Phillips on (02) 9969 1244 or by email on andrew@mhyc.com.au.