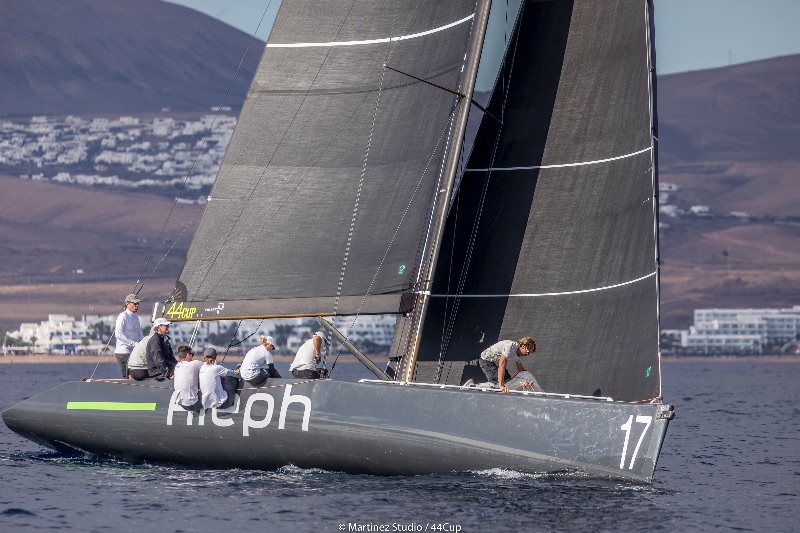 Team Aleph won the only race of the day. Pic - Martinez Studio / 44Cup 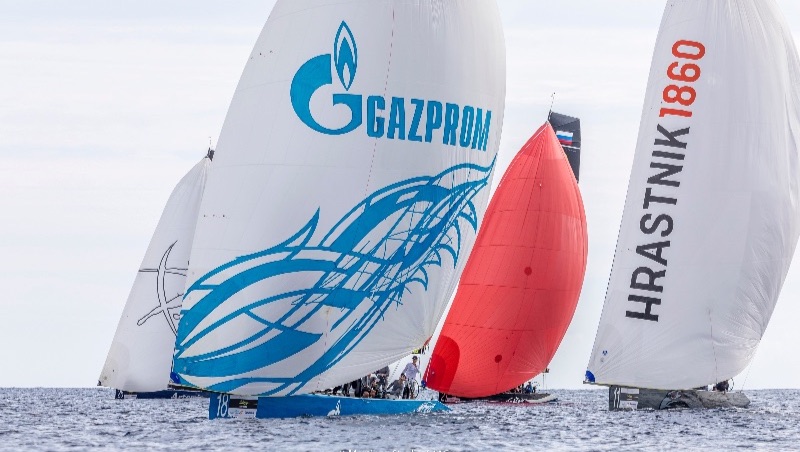 The 44Cup Calero Marinas Lanzarote, the final and deciding event of the 2021 44Cup, got off to a difficult start.

Only five to six knots of wind is needed to race the nimble RC44s. On several occasions the race committee valiantly began a start sequence in more than this, only for the wind to disappear.

Finally, moving the entire race course north towards Lanzarote’s capital Arrecife enabled one race to be held. In this there was a tight-run battle between Hugues Lepic’s Team Aleph, John Bassadone’s Peninsula Racing and surprisingly, newbie 44Cup team Valeriya Kovalenko’s Arttube. Among the nine racing, this trio did the best job of reading the shifts and the awkward current coming out of the mid-left.

Then, on the final run, as the wind was getting ever shiftier and softer, Chris Bake and Team Aqua benefitted from a massive flier out to the right side of the course. Finding marginally improved pressure there pulled the reigning RC44 World Champions up to second place but the move was unable to advance them far enough to catch Team Aleph, which won what would prove to be today’s only race.

With Michele Ivaldi calling tactics as usual and an otherwise regular Team Aleph crew, standing in for helmsman Hugues Lepic at this regatta is Italian Alessandro Rombelli. A highly accomplished owner/driver, Rombelli’s yachts are all named Stig and have spanned Maxi 72s down to the complete range of Melges sportsboats.

“The race committee did a great job moving the course, because here in front of the harbour it would have been impossible to race,” Rombelli noted. “It was still difficult to keep momentum and speed and to get lucky on the wind shifts, but it worked well for us. It was a great start to the series. I am here just standing in for the owner, so I am happy that we have got a good result for him.”

Rombelli has not sailed an RC44 before, but said he was impressed with its versatility, now he has raced it successfully in impossibly light conditions today and in 18 knots while training.  “The boat is super fun. It is technical. It is a good combination. The big genoa is definitely helping when conditions are super light.”

While none of Rombelli´s Stig regulars are on board, there are many in the crew he has raced against, including Italian tactical wizard Michele Ivaldi. “It is good to have today behind us,” said Ivaldi once ashore. “The main thing was the very light breeze and the pressure coming in and out. We were pretty lucky on the first beat to get the right shift. But it was open to the end.”

John Bassadone and his team on Peninsula Racing were sailing with a confidence not seen recently, boosted no doubt by their new tactician, British two time Olympic Finn gold medallist and America´s Cup sailor Giles Scott. They were headed for the podium until losing out on the final run.

“We have done one race with Giles but it was great, a really good feeling, I´m really enjoying sailing with him,” said Bassadone. “He is obviously a fantastic sailor. Today was very positive in difficult conditions, but we made the right calls and the boat is going quite well.”

With her Spanish crew, Peninsula Racing is effectively the ´home team´ here and Bassadone has fond memories of Lanzarote, having won here in 2017 but also it being the first place where he raced his now beloved RC44. “It is fantastic to come back to Puerto Calero. We have enjoyed some good results here and we have some good friends here in the Caleros. I love coming here.”

After finishing last in her first ever event on the 44Cup in Scarlino last month, Valeriya Kovalenko was all smiles once her RC44 Arttube returned to Puerto Calero. Third place today is her best result to date in the 44Cup.

“Today it was light winds and we have had more training in that in Russia,” said Kovalenko, who struggled during her first regatta steering an RC44 last month in Scarlino´s strong breeze. “This wind is good for me. We are happy with our result today,” she concluded, adding that while this is her first time to Lanzarote, many of her crew raced here previously on Kirill Podolsky´s RUS7.

Racing continues tomorrow at 1200 when it is hoped conditions will be marginally improved. Follow the racing live at www.44cup.org.