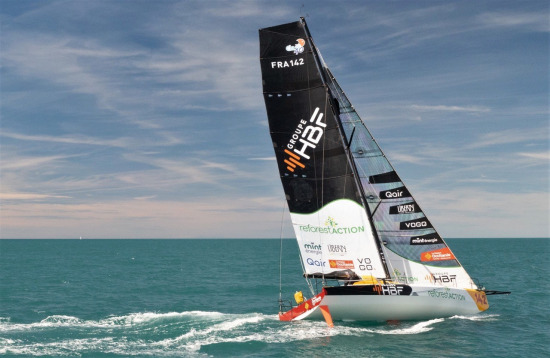 HBF - Reforest'action has withdrawn from the race after the explosion of its bowsprit. Pic - TJV

A breakage aboard HBF-Reforest’Action forces her to become the first Class 40 boat to abandon the race.

Sam Davies chases the IMOCA leaders whilst Leyton wins a night-time duel in the Ocean Fifty.

The Class 40s are approaching the island of Sal in Cape Verde – the crucial waypoint that will see them turn right and head west to Martinique.  Their options are many; go round all the Cape Verde islands or slip between them? The only rule is to keep Sal on starboard.

“The question is where it will go best, there are still windless areas. It looks like it will be good to go south to get the trade winds, so we’ll probably do the long way around,” said Simon Koster (Banque du Léman).

With the front of the fleet having compressed overnight, Britons Brian Thompson and Alistair Richardson continue to sit in the leading pack. However, there’s a chasing group, that includes Croatia Full of Life co-skippered by former world champion skier Ivica Kostelic and Japan’s Masa Suzuki aboard Milai, are steaming in and could really mix up the leaderboard.

HBF – Reforest’action has withdrawn from the race. Kito de Pavant and Gwen Gbick saw their bowsprit explode under the pressure of the gennaker while sailing at 20 knots. Without this piece of rigging, it is impossible to hoist the headsails that are essential for the rest of the race.

In a note received overnight, the crew said: “The decision was taken quickly. We are abandoning the race. We are now heading north to the Straits of Gibraltar, over 1000 miles away. It will probably take us a good week.

“The disappointment is great, as is the energy of the whole team over the last few months to optimise the boat, but we have to accept these blows of fate… this is not the first and unfortunately won’t be the last.”

Leader LinkedOut is widening the gap on its two closest rivals Charal and Apivia. The doldrums have so far, not slowed the leading 60 footers too much although there’s still a long 250 miles ahead of them before they escape.

The chasing group are making hay whilst the wind blows – under spinnaker in a lightly disturbed trade wind – but it’s not expected to last as the conditions in the doldrums are forecast to worsen as they enter the zone. “There is a lot of uncertainty in these Doldrums, we have seen the frontrunners go much more east than usual, we are going to deal with it as best we can,” explained Loïs Berrehar (Nexans – Art & Fenêtres) on the radio this morning.

Briton Sam Davies on her older generation boat, Initiatives Coeur, is in fourth place 200 miles behind the leader whilst USA’s Charlie Enright is 100 miles further back in 11th on board 11th Hour Racing Team’s Malama.

Since yesterday, the 50-foot multihulls have been on a speed run towards their waypoint at Fernando de Noronha. 60 miles behind the leader Primonial is a three-way battle for second between Koesio, Leyton and Solidaires en Peloton-ARSEP.

Earlier in the night Leyton, co-skippered by Briton Sam Goodchild came out on top in a duel with  Armel Tripon and Benoit Marie. An error on board Les P’tits Doudous allowed Leyton to escape. But the competitive spirit on the French boat remains strong.

“It’s obviously a bit frustrating. It was a mistake in placement and sail choice. We don’t have a code 0, which penalises us in the transition zones,” said Tripon. “But there’s still a long way to go, we have a lot of downwind sailing left and we have a boat that has a lot of potential in those conditions!”

With 35 knots on the speedo, the Maxi Edmond de Rothschild is clocking up the miles towards their second course mark, San Pedro and San Paulo, which they will have to leave to port before setting course for Martinique. The challenge for the leaders will be to negotiate a second passage through the doldrums which is still not very stable and could well slow them down on the final stretch of the course.